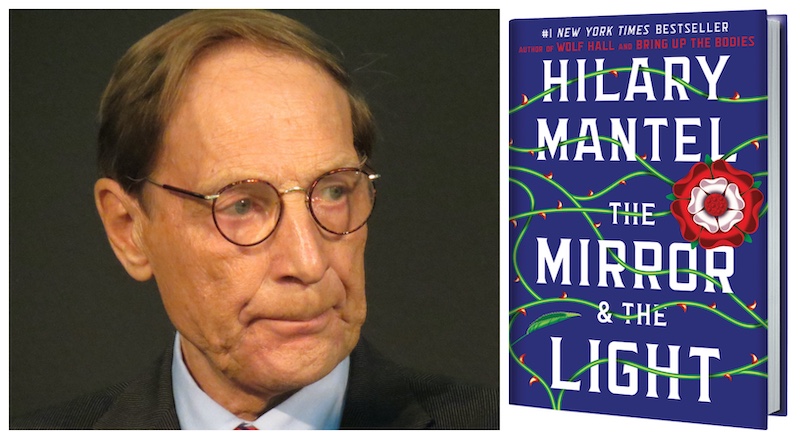 When the pandemic was a fact, people knowledgeable in literature gave out reading tips in magazines and newspapers. The most common one was Camus’ “The Plague”, understandably. But also, other classics were brought forward, side by side with a book that eventually might reach the status of a classic.

The third part of Hilary Mantel’s trilogy about Thomas Cromwell first came out at the start of the year.

Despite the favourable things that have been said about the three-part series, many people surely doubted: The English original "THE MIRROR AND THE LIGHT", consist of about 883 pages (Finnish translation “Kuningashuone” is 900 pages).

Personally, I’m quite hesitant when it comes to historical novels. Why paraphrase and dramatise history when the real thing is dramatic enough? But “The Mirror and the Light” (“Spegeln och ljuset” in Swedish) offers a fascinating take on the genre; an unusually successful attempt at making an era, and an important historical figure, come alive. Even if Mantel has worked hard to make the environments and details authentic, the dialogues and monologues are obviously fiction. Despite this, they sound surprisingly authentic.

In short: Thomas Cromwell was a man of the people, who worked himself up to the highest posts as King Henry VIII’s advisor and confidant. He was the man who sped up the reformation, and at the same time brought marriage candidates to his king to ensure the male succession. In the first two parts of the trilogy, “Wolf Hall” and “Bring Up the Bodies” his career is depicted: Son of a blacksmith, mercenary, and banker in renaissance Italy, as well as a workaholic skilled in languages. He makes sure that the treasures of the monasteries fall into the king’s coffers, and consequently becomes the most hated man among Catholics and the high nobility.

I cannot avoid seeing parallels to today’s world while reading this great thick book. Henry and his court were afraid of the plague that came and went. England was an isolated island that felt threatened by invasion from the Holy Roman Empire. Scotland was still independent. The reformation turned into a way to free themselves from the pope in Rome, a sort of early Brexit. English foreign politics was a balancing act between France and Spain. The center of world trade lay in The Netherlands, part of that time period’s EU.

Mantel’s strength is personal depictions. Cromwell, the guarded and patient advisor gradually becomes bolder, less careful. The reader already knows his fate: the execution block, where he sent both queen Anne Boleyn and many noblemen. Henry is a fickle despot, and no one is safe. Boris Johnson has yet to “execute” his own Cummings, despite the critique coming from parliament. In Cromwell´s England, the parliament was equally helpless… In Trump’s court, the heads fall faster, and Putin has his own Cromwell.

Well, one should not go too far with the analogies, but one thing is for sure: During the past 500 years, authoritarian behavioral patterns have not changed. The other striking insight you get while reading Mantel’s three fascinating books is how deeply rooted a society based on class really is in the history of England. Already, at Henry’s court, the high nobility refers to three-hundred-year-old privileges. Neither Cromwell’s excellent qualifications nor his relative Oliver Cromwell’s short-lived republic during the 15th century would provide an increase in equality between the classes.