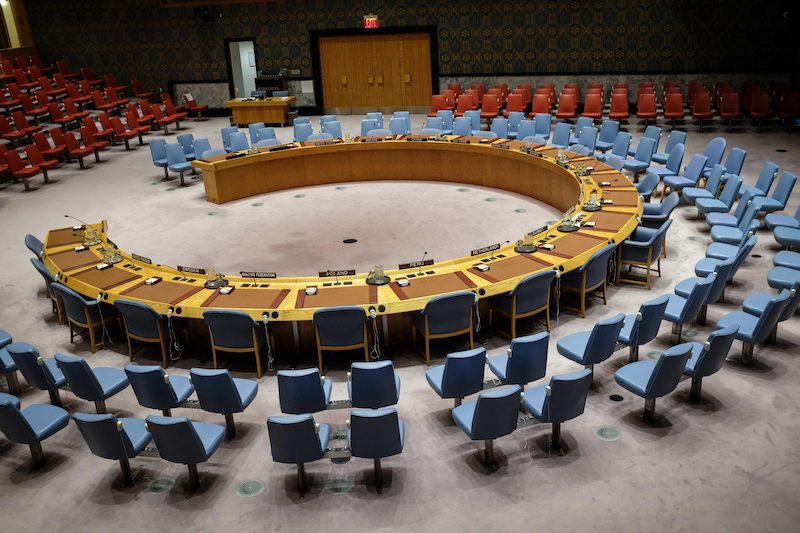 In this file photo taken on January 5, 2018 the chamber sits empty before the start of a U.N. Security Council meeting concerning the situation in Iran, in New York City. LEHTIKUVA / AFP

The 14th of July 2020, marks the fifth anniversary of the Joint Comprehensive Plan of Action (JCPOA) Agreement. Iran showed its good faith by engaging in negotiations to reach a diplomatic solution as called for by all Security Council Resolutions on the nuclear issue. After thirteen years of complex negotiations, in 2015 Iran and the five permanent members of the United Security Council plus Germany signed the Joint Comprehensive Plan of Action, which is annexed to- and inseparable from-Resolution 2231.

Immediately after the adoption of the Resolution, Iran fulfilled all its commitments in good faith, verified by numerous IAEA reports.

Despite this great achievement of multilateral diplomacy, the President of the United States in May 2018 announced his country’s unilateral withdrawal from the JCPOA, and the unlawful re-imposition of all U.S.sanctions, in material breach of Resolution 2231.

Iran and other members of the international community have, since the 8th of May 2018, been witnessing the U.S. Government- a co-sponsor of Security Council Resolution 2231- persistently flouting the Resolution, while also trying to force other states to join it in violating the very text it put forward itself.

For the first time in UN history, a permanent member of the Security Council is punishing law-abiding States and private citizens for not violating a Council resolution, which promoting and facilitating the development of standard economic and trade contacts and cooperation with Iran.

While the European JCPOA participants requested Iran to wait for only a few weeks to allow them to compensate for the losses Iran incurred as a result of re-imposed U.S. sanctions, not a single Council session has convened to investigate the U.S. Governments repeated violations. Instead, some European members of the Council are contemplating further undermining the Resolution and the Council while also reneging on their own JCPOA commitments.

Unfortunately, the EU3 response to Iran’s strategic patience was not a long-overdue assertion of European strategic autonomy. Instead, it was over-compliance with the U.S. maximum pressure targeting all Iranians.

The unlawful U.S. unilateral withdrawal from the JCPOA and the re-imposition of its sanctions entail the U.S. responsibility under the UNSCR 2231, UNCharter and applicable international law. The U.S. has also disregarded the decision of the International Court of Justice.

As the fifth anniversary of the JCPOA approaches, the world needs to hold U.S. Government accountable for the consequences of its wrongful acts including its malicious endeavours to wage economic terrorism on the entire Iranian nation, wilfully deprive them of food and medicine, and irreparably harm their economy and their standard of living. The U.S. administration is maliciously tightening illegal sanctions, with the aim of draining Iran’s resources, impairing the country’s ability to fight the COVID-19 pandemic. The United States must fully compensate the Iranian people for all damages it has inflicted upon them- appallingly and for no reason.

While, the Islamic Republic of Iran has shown- in words and deeds - our desire and preference for constructive engagement, we do not depend on others for our security, stability or prosperity.

As an ancient nation-state and civilization, we have learned to solely depend on ourselves. That is why more than 40 years of U.S. pressure – whether through demonization or war, sanctions or terror- including the cowardly assassination of our region’s counter-terrorism hero, General Qassem Soleimani- has failed to bring Iranians to their knees or affect our people’s decision-making calculus.

The world needs to understand and step up to defend peace, international law and social justice. The future of all depends on it.

Ambassador of Iran in Finland