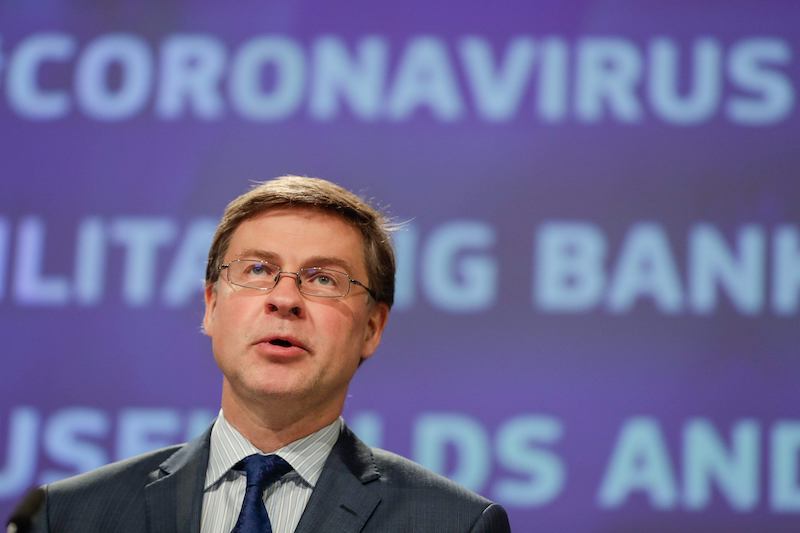 European Commissioner in charge of Economy Valdis Dombrovskis gives a press conference on a banking package to facilitate lending to households and businesses in the EU at the European Commission in Brussels, Belgium, 28 April 2020

European Economy Commissioner Paolo Gentiloni hinted at the possibility that the Commission may utilise pan-European tools in the form of equities to rebalance risk in the Eurozone. On the same note, the French treasury proposed in a position paper an “equity fund” to recapitalise businesses or buy shares in domestic companies.

EU member states have made strong promises to contribute to improve the EU financial framework, corporate governance, and regulatory autonomy. In addressing policy instruments available to governments in financial crises, debates among politicians and policy analysts question whether such an agenda can be accomplished at the pace and on the scale that current member states imagine.

The European Commission Vice President Valdis Dombrovskis has signalled that the EU executive has had internal discussions with EU leaders on the functionality of a share-buying fund. It would be the aim of the fund to expand the EU financial capacity and its reach, and it would provide a more balanced approach to target less developed EU economies with limited financial capabilities.

For EU member states to be effective as political actors and to create a strong state capacity requires the political will and systematic enforcement of an EU-wide financial framework.

The EU-level bargaining process in stimulus policy, resulting political pressure, and the possibility to expand regulatory autonomy throughout the eurozone are the driving forces for change in the role of the EU member state.

For the next seven years, the Commission’s Multiannual Financial Framework (MFF) will include support for the Single Market in key economic sectors and restoration of healthcare systems and will provide economic resilience with the implementation of a new Solvency Support Instrument. The Solvency Support Instrument will be seed capital to spur investment in local eurozone economies.

To finance the investment program, the European Investment Bank will be in control of implementing the InvestEU program. The InvestEU program has been developed as a financial instrument to support solvency. As such, the connection between stimulus and regulatory policy provides an important basis for ongoing political discourse on corporate governance and policies related to investment and debt accumulation.

The current debate between EU officials focuses on the expansion of investment policy in EU member states to create a high level of growth for local economies. In policies imposed by European institutions, member states rely on the direction of policy competency types based on regulatory and direct expenditure programs.

The French treasury has proposed a finance strategy which will combine national and EU capital to create an equity fund.  This allows member states throughout the Eurozone to recapitalize or to acquire shares in distressed companies. By creating joint capital instruments, the intergovernmental approach will provide needed political legitimacy in the Eurozone and the possibility to create more EU solidarity.

If the French strategy proves to be effective, it will address discontent in society and will allow for a greater role of the EU in the reforming of the Single Market and in providing resources for member states to access capital. This strengthens the argument for enhanced intergovernmental cooperation and the expansion of EU institutions to support the actions of member states. The balance found in the regulatory authority of both, the EU and member states, builds the institutional framework for addressing backlash from anti-European and austerity sentiment.

This reliance on EU capital directly mitigates the ability of EU member states to receive incentives and creates accountability in policymaking between the EU and its member states.

On the same token, finance ministers of smaller member states oppose austerity measures and support EU reforms in favor of an EU-wide COVID-19 recovery. The sentiment is that excessive debt will hinder economic growth in their countries. Negotiations of debt in COVID-19 recovery proceedings are seen as political brinkmanship to gain other concessions in reducing austerity measures.

The proposal supported by the EU Commission and the French treasury is still in its infancy. As the crisis deepens, it is clear that member states will need an open line to capital.