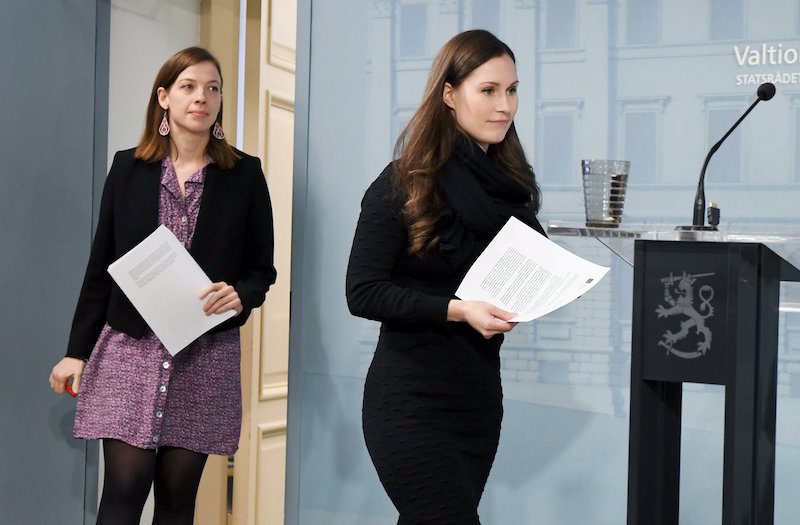 The Finnish government has decided to reopen basic education starting May 14th for the rest of the academic semester, which ends at the beginning of June. The decision does not leave any leeway for municipalities, schools, teachers or parents, and makes it compulsory for everyone. Teachers in risk groups or kids who have high-risk family members should present a doctor's statement to stay home. Those who have "flu-like" symptoms can also stay home.

This means that every Finnish kid and teacher is obliged to go back to face-to-face teaching for 11 days at the end of May.

Ironically, this is the same period that the THL forecasts the epidemic to reach its peak in Finland.

The government has set several requirements for the reopening, emphasising the need for social distancing and special arrangements for classes and food serving, such as using "other facilities" to spread out the children and dividing the teaching to different shifts.

The decision, which bemused and surprised both teachers and parents who were getting a grip on remote teaching, came as the first measure to gradually reopen the society after 24 days of shutdown.

Teachers, parents and students interviewed by the media were mostly critical and sceptical to how all this could work out. Anyone who has been around children can tell you that it's impossible to force kids to observe social distancing rules. Teachers also found the instructions often laughable. "My unit has 500 pupils. The facilities are fully used. Over half use school transport. We'd have to organise lunch class by class, take turns with teaching, arrange additional hand-washing. All this in two weeks. What's the point, may I ask? A large number won't show up for school," tweeted Jari Andersson, the principal of Sylvää School in Sastamala.

Minister of Education Li Andersson reminded the concerned parents that all the decisions are based on the assessment of health care officials that it is safe to return to schools.

"Experiences both abroad and at home suggest children have only had a minor role in spreading the new coronavirus," stated the government.

Mika Salminen, the head of health security at the Finnish Institute for Health and Welfare (THL), stated that children contract the virus rarely and, even then, typically develop only minor symptoms. The risk of a child transmitting the virus to an adult is "really not realistic," he said.

Unfortunately, this is not entirely true. While at the start of the pandemic, there were suspicions that children could be super-spreaders, and later observations showed that they do not get seriously ill, the jury is still out on the role of children in spreading the virus and the risk to their health.

There have been very few scientific studies done on children and Covid-19, and there is a lot we don't know.

In an interview with the BBC World Service, Professor Andrew Part of Oxford University told that even though children themselves may have a lower risk of severe disease, "at this moment, we have very little information about transmission between children or from children to adults."

In fact, there is some evidence to the contrary. "There are some studies of children, showing that those who have been detected having infection can shed it for very long periods of time," prof. Andrew added. "The question about opening schools is when that happens whether the children make any significant contributions to the transmission to the rest of society."

Although children have rarely had the severe pneumonia characteristic of Covid-19 in adults, there have been other diseases suspected of being caused by Sars-CoV-2 virus in children. Symptoms ranging from kidney failure and inflammation of blood vessels resembling Kawasaki's syndrome in children have puzzled paediatricians around the world. Even though these cases are rare, they are serious indications, that the virus could act entirely differently in children and have long term effects which we yet do not know about. A lot of the variances seem to be based on enormous differences about the way the immune system works in young children compared with adults, particularly older adults, and not the infection rate or transmissibility of the virus.

Two new studies have added evidence that children can transmit the coronavirus, and the data suggests that cases could soar if schools are reopened. In one study published in science, a team of researches analysed data from two Chinese cities and found that even though children's susceptibility to the virus is one third of adults. However, as kids had three times more contacts in schools and thus three times higher risk of becoming infected than adults, this practically evens the risk for children. Researches concluded that keeping schools closed could reduce the spread of infections by 40-60%.

The second study performed by a well-known virologist, Dr. Christian Drosten in Germany, compared tested children and adults and found that children who test positive harbour and shed as much virus as adults do, and thus are as infectious as adults. The study found that asymptomatic children had viral loads as high or even higher than symptomatic ones or adults. Some were even having "sky-high viral concentrations."

Even though these are only two studies and we need much more to have definitive answers, "to open schools because of some uninvestigated notion that children aren't really involved in this, that would be a very foolish thing." Epidemiologist Jeffrey Shaman of Columbia University told the New York Times

Foolish is indeed also the Finnish government's order that only those children can stay home who have symptoms. Unless the doctors test every kid for the virus, there would be

no way to detect asymptomatic spreaders and even super-spreaders.

The other issue is that schools are run by many adults, teachers, janitors, cooks, nurses, psychologists and other staff, and kids have to use public or school transportation to get to and back from school. Just recently, the city of Helsinki announced that 24 people in 18 daycares run by the municipality had tested positive for the virus.

Is it really worth it for so many adults also being put at risk to be actors in a brief, useless 11-day theatre of "back to normal?"

Another argument the authorities have used for reopening schools has been the decrease in the reports of child protection cases, which is automatically translated as a decrease in detection of child abuse cases due to lack of external contacts by teachers. Argumentation is that teachers detect many of these cases, and now that the schools are closed, some kids may be suffering from maltreatment by their parents at home, and opening schools would bring these cases to light. A similar problem has been discussed regarding an increase in domestic violence during lockdown both in Finland and other countries.

Child abuse and maltreatment is a serious issue in Finland with over 100 000 cases reported each year and 18 500 children being resettled to institutions and foster homes only last year. Granted that daycares and schools have actively participated in reporting these cases, but the society has to find better solutions for this problem and address the root causes, which are poverty, unemployment and issues with mental health and substance abuse. Schools should- and could not function as primary policing institutions for child abuse, while social services for children and youth have been systematically diminished during recent years.

There are other ways to tackle this problem, but reopening schools for 11 days and exposing over 560 000 elementary school kids and their families to the risk of Coronavirus infection is not one of them. What are we going to do when the summer break starts on the 1st of June?

Even though the risk of transmission is Finland is low, even one avoidable death is one too many.

Government also stated that "there is no legal basis for keeping schools closed anymore." Which is also not true and is based on the false and unproven assumption that children are not at risk and do not contribute to the spread of the infection. The government still has the same emergency powers used to close schools at the first place when the number of cases and fatalities were both much lower than now. Now with much higher numbers and the epidemic still on its way to peak, same justifications are still valid.

Marin's government has lingered from meeting to meeting without a compelling exit strategy. The period of shut down, which costed Finland over a billion euros per week, was not used effectively to test and trace cases and bring the epidemic under control. We have now come a full circle back to the defunct and dangerous "herd immunity" option, which although often denied, seems to be the only "strategy" the authorities have had from the beginning.

Sadly, this option is not based on knowledge and science, but is taken only because it is the only way out for an unprepared establishment, which seems to be unable to organise its forces for the war against the pandemic. The sense of urgency needed for handling a crisis of this magnitude, has unfortunately been missing.

We should not compare ourselves with the worst cases from other countries. Finland with a small and dispersed population and late arrival of the virus had a great head start, which if used effectively and on-time, could have resulted in a full control of the epidemic.

A shutdown is not a cure, but merely a pause button. A lot should have happened during that precious time to change the course of the battle, but unfortunately, we come out of the shutdown as unguarded as we went in.

The society can not be closed forever, and the government is forced to test the waters, but schools are not the best instances to start with. Children should not be the guinea pigs to be sacrificed first.