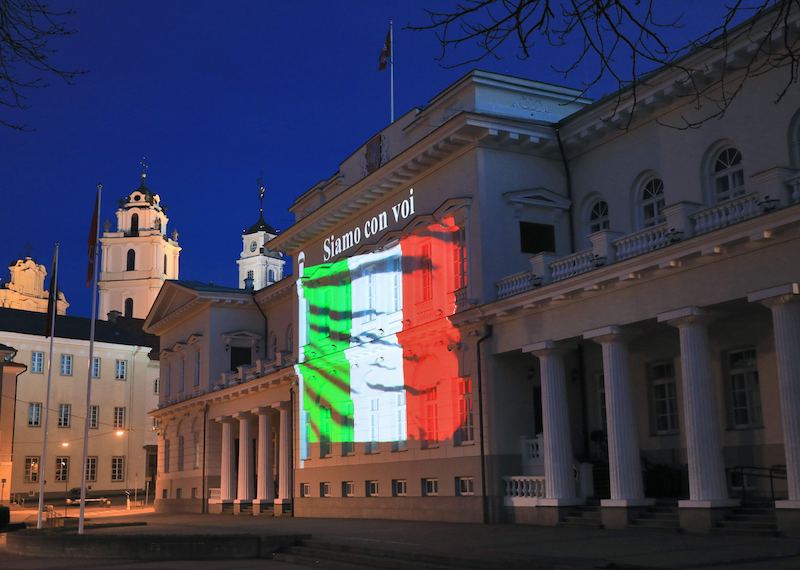 The Presidential Palace is illuminated in the colors of the Italian national flag and the words "we are with you" in Vilnius, Lithuania on March 31, 2020, expressing solidarity and support for Italy. / Lehtikuva

It’s a new world order defined by the global health politics of Coronavirus. The borders are back and resealed. Maybe just temporarily or perhaps we are back to where we started before the current global integration. The year 2020 started on a high note. At least, besides the old known problems, we were not expecting fundamentally earthshaking ones. Forecasts were positive and optimism was high.

Then came coronavirus.  It was merely a localized Wuhan, (China) public health conundrum until it no longer was. It was gradually becoming a regional epidemic and then it quickly degenerated into what the WHO now calls a global pandemic.

Stock markets initially responded with cautious optimism but the reality hit home as trading floors started registering negatives. Demand fell, productivity dipped as many remained home-bound on sick leave or due to measures aimed at containing the outbreak. Tourist centres in affected nations have been closed, major events canceled, thousands quarantined, schools closed and crowded spaces discouraged. All this and many more have deeply disturbing implications for the global economy.

Scientists are running 24-hour shifts to expedite the process of acquiring antidotes. There is angst everywhere but the usual suspects for outbreaks such as African nations have been largely spared. As matters stand, the situation in Europe, the epicenter, is dire.

Apart from the rising morbidities, mortalities and the financial losses accompanying the disruptions, there is one major problem; global health gains are being reversed with health inequalities widening because resources meant for “normal” problems are being directed towards this extraordinary emergency. Global interconnectedness is partially arrested and some experts are predicting doom and gloom, while others appear quite measured in their pronouncements. As for the second-round shock on the real economy, it is not unthinkable to see a parallel with the 2007 subprime crisis. Faced with this perspective, the main Central Banks all over the globe have moved to boost confidence by easing the financing conditions and allowing credit to flow. Calls for a coordinated fiscal stimulus are getting louder. Thus far, nations have conducted themselves responsibly by containing the virus from further spreading to larger populations. That notwithstanding, there is more room for improvement. China, Italy and the world will come out of this. The less affected regions shouldn’t rejoice yet because as was seen in previous years with Ebola, we don’t quite know enough to make projections as to how much this will reverse economic and health gains. If scientists working assiduously on cures serendipitously find something, we shall see a quick relief; otherwise a global economic downturn is not farfetched as per economic prognosis.

The Italian model of Hope

The name of the current Italian minister of health is Roberto Speranza (Hope). This is a most fitting name for times like these. Si, Italia puo farcela! There’s a glimmer of hope as thousands have recovered or are recovering due to the extraordinary sacrifices of first responders. Albeit a little tardy, Italy has demonstrated itself as a compact model with a well-organized government, and a supportive population. Social commentators, journalists, musicians, professors, experts, and responders are all saying the same thing. “Io resto a casa’ and the people are generally cooperative.

The Italian model is based on three pronged-approach; packages for families, enterprises and healthcare systems. It is worth noting that most, if not all equipment, medicines, laboratories, and technologies needed for this emergency will be Made-in-Italy. Contractors are Italian firms that are capable of providing various products and services to the ministry of health and other regional and special hospitals. There is an army of medical doctors and nurses mostly trained in Italy ready to serve. Thus, Italy was not totally underprepared but international solidarity, cooperation and information exchange has been a welcome addition.

What will a crisis scenario in Africa similar to Italy’s look like?

In developing nations, there is a massive vacuum in public health; ranging from the lack of finances, expertise, infrastructure and research capacity. The current threat must force governments to change priorities about long-standing neglect of the appalling nature of their health systems. We are not suggesting that the Italian health care system in the North is the same as the zona Mezzogiorno. But public health systems are institutions that evolve over time. Panicky interventions during epidemics are just reactionary additions.

For the less-affected nations across the developing world, it seems that their best shot is not to be affected much, by taking extreme precautionary measures. In a full-blown crisis scenario, how will governments mobilize billions in emergency funds and manage them sans corruption?

More prominently, slower economic growth will impose a double burden in particular on countries that are dependent on China for production or export or whose economies are heavily reliant on minerals and oil as prices fall. The populations will bear the brunt since more than half of the households across these economies are employed in the informal economy, there may not be state support for them. This brings attention to the politics of strategically preparing for contingencies across Africa. That falls woefully short.

The refrain among global health experts is; “when will Africa start manufacturing its own drugs so that in acute circumstances like these, the continent will not need to look outside for eleemosynary gestures and donor support?” Can Africa count on her own medico-techno-scientific resources to produce optimal outcomes? The EU and national governments immediately mulled plans to fill financial vacuums to meet the emergency needs, but can the African Union do the same? We cannot start quantifying the the medium and long-term losses. What we do know, however, is that the impact of this pandemic will be massive but some regions will weather the storm better. In the non-discriminatory democracy of viruses, there is neither us nor them, there’s pandemic against humanity. Global cooperation is paramount because the reversal of health gains anywhere affects us everywhere.

Frederick Ahen is a senior research fellow at the Turku School of Economics, University of Turku, Finland. Frederick’s research straddles the areas of sustainable global health governance and the role of business and non-business actors in changing health institutions. He is on the editorial boards of Critical Perspectives on International Business and Foresight: The Journal of Future Studies, Strategic Thinking and Policy. Frederick is the author of a forthcoming book entitled “Global health manias: How the ultimate preference for non-optimal solutions in global health governance creates new crises”.

Chiara Pierdicca works at the European Commission for the Directorate-General for International Cooperation and Development in the unit responsible for Southern Africa and Indian Ocean. Before joining the Commission she worked as research assistant at the College of Europe in the European Economic Studies Department. She studied international economics at the Polytechnic University of Marche in Italy and European Economics at the College of Europe in Belgium. The views expressed in this publication are the sole responsibility of the author and do not necessarily reflect the views of the Commission.