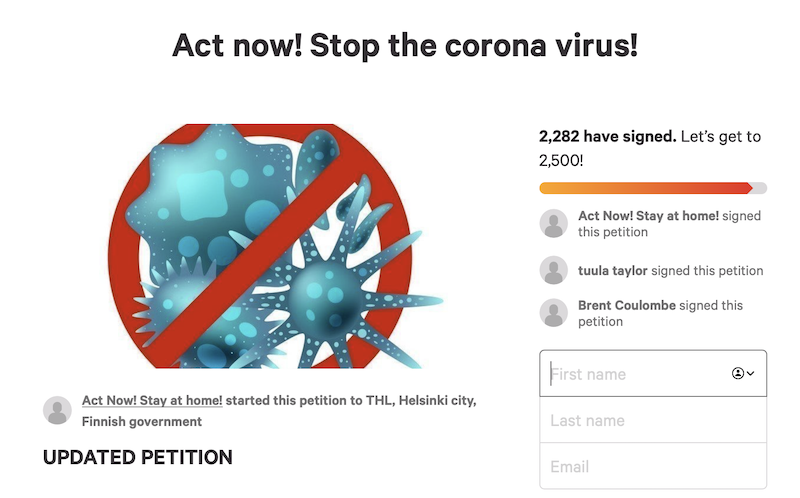 “We are a group of concerned parents who started a PETITION to the Government on 13 March to close Universities, schools, daycares, public places and events due to the coronavirus outbreak. Following the announcement of THL on the testing approach and WHO recommendations to isolate, test, treat and trace in order to suppress and control the epidemic, we updated our petition to include also a plea to the Government to re-consider the testing approach.

We believe that applying early enough the good experience of South Korea in performing an increased number of tests outside of the hospitals, following the drive-through and home pick-up testing approach, together with a rigorous contact tracing and facility isolation of the cases may decrease the need for a total lockdown of the country.

We appreciate the measures taken by the Government on 16 March to close schools and Universities and limit public gatherings and meetings to 10 people maximum. We are nevertheless concerned that on 17 March the Government clarified that daycares remain open to everyone regardless of profession and on 20 March decided to re-open schools for kids in grades 1-3 again for everyone regardless of profession. We understand the difficulties faced by parents and their concerns on the impact of their normal work routines, however we believe that social responsibility and protecting the health of the vulnerable and the people critical for the society at that moment are more important. We fear that with everyone being allowed to bring kids to the daycare and schools, this may potentially bring the number of kids in a daycare or school over 10 which is the allowed by the Government number for public gatherings, thus threatening the health of the staff of the daycares and schools, but also the health of the people, whose posts are critical for the society. We also fear that these measures on the daycares and schools may hamper the effective implementation of the instructions issued by the Prime Minister on 20 March about gatherings of kids and youth, as well as the effectiveness of the other measures already taken.

We hope that the Government consider to limit the opening of the daycares and schools to only people whose posts are critical for the society in that difficult moment (such as nurses, doctors, staff working in security, police, supermarkets, transport) and for those whose job doesn’t allow working from home.

We hope that besides the ban of limiting gatherings to 10 people, the Government consider additional measures to keep the safety distance in the public places that still remain open (such as for example, to ban events and promotions in the shopping mall centers and to issue instructions on spacing out tables in restaurants, cafeterias and bars).

We also hope that the Government consider changing the current testing approach and increase the number of tests performed outside of the hospitals, following the drive-through and home pick-up testing approach of South Korea, together with a rigorous contact tracing and facility isolation of the cases, which may decrease the need for a total lockdown of the country and thus limit the social anxiety and disruption".

This article is a letter sent to Helsinki Times by a reader. We prefer publishing reader’s letters signed by the authors real name, but can publish anonymously in exceptional cases and from groups.

You can send your letters to : This email address is being protected from spambots. You need JavaScript enabled to view it.

Editors keep the right to select the pieces and edit when necessary.

The views and opinions expressed in this article are those of the authors and do not necessarily reflect the views or position of The Helsinki Times.