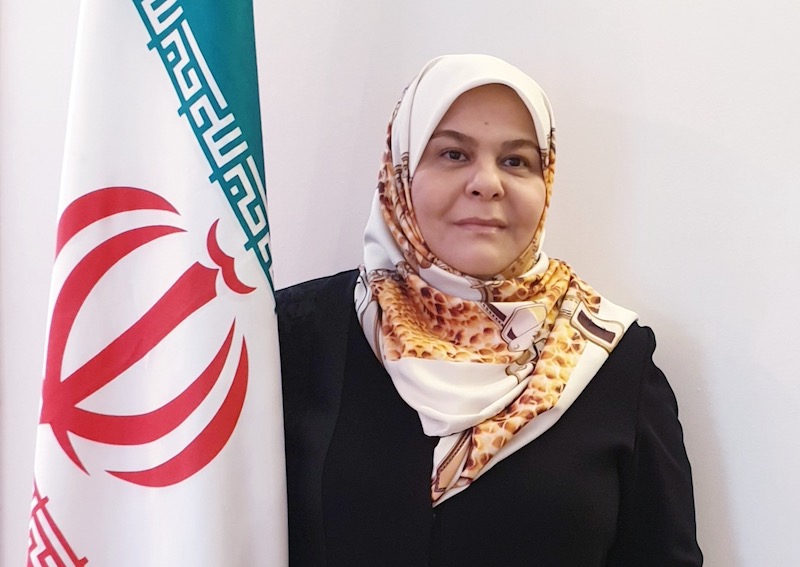 “It’s time for Europe to disregard unlawful and unilateral US sanctions against Iranian People.”

“It’s time for Europe to disregard unlawful and unilateral US sanctions against Iranian People.”

After China and Italy, Iran has been one of the most affected countries by the Covid-19 pandemic. The country which has been under extreme sanctions by the United States was already in economic hardship before the pandemic. Has there been any ease of sanctions or help from the international community in fighting the disease ? How does Iran manage in this extraordinary harsh situation?

We put these and other questions to the newly accredited Ambassador of Iran in Finland Ms. Forouzandeh Vadiati.

Before moving to Helsinki Ms. Vadiati was the Director General for Human Rights and women in the Ministry of Foreign Affairs of I.R.Iran. Ms. Vadiati is a carrier diplomat. Among others she also served as senior diplomat in Permanent Missions of the Islamic Republic of Iran to the United Nations in both Geneva and New York. She has a M.A. in Political Science.

HT:  What is the Corona Virus situation in Iran at the moment and how has it developed since the start of the pandemic?

Ambassador: As you know, the entire world is now officially facing a pandemic. Many countries are affected by the spread of the highly contagious COVID-19 virus. Unfortunately, Iran is among the most impacted so far.

Iran has been implementing a number of effective and immediate measures to confront the spread of the virus. The Ministry of Health has taken the lead in efforts to tackle the disease and has launched a national campaign to control COVID-19. This emphasizes early case detection, contact tracing, isolation, treatment and community engagement.

In addition to designating tens of hospitals across the country for the treatment of infected people, a network of 35 diagnostic laboratories have been identified to help us test cases and at least 20 more will be added.

Iran’s health officials and health workers are on the frontline of this battle and have been working very hard to control this outbreak and to save lives. We are very proud of their dedication and commitment.

These efforts have been acknowledged by the World Health Organization. During a recent field visit to Iran, the WHO team acknowledged that “Iran’s strategies and priorities to control COVID-19 are evolving in the right direction, a comprehensive coordinated approach is being applied, and solid work is being done especially in the areas of case management, laboratories, and risk communications.”

Our medical centres, doctors, nurses and other health practitioners are among the very finest in the world. But, despite their best efforts, the coronavirus has dealt a heavy and tragic blow across our country.

Unfortunately, our efforts have been hampered by an illegal sanction regime imposed on us by the United States ever since it decided to violate its commitments under Security Council resolution 2231 in May 2018. This indiscriminate campaign of economic terrorism, the worst in history, has only helped pave the way for the coronavirus’ path of death and destruction. This so-called campaign of “maximum pressure” is not only hurting Iranians, it also undermines our ability to stem the spread of this virus. That is a risk to global health. Viruses don’t recognize borders.

HT: Iran has the highest number of cases after China and Italy. Why did Iran become affected so heavily?

Ambassador: Let me be clear, COVID-19 is not only present in the three countries you mentioned. This is now a global pandemic. Viruses recognize no geography.

Our healthcare personnel are courageously battling COVID-19. However, while other nations debate strategies to control the spread of the virus, our people have to tackle this crisis against the backdrop of unlawful and draconian American sanctions. We don’t have the full benefits of adequate medical equipment and supplies, and we are still dealing with the various other ways these sanctions have devastated our economy even before COVID-19 reared its ugly head.

HT: What are the challenges, problems and needs for fighting the virus in Iran right now?

Ambassador: The most urgent needs of the Iranian care personnel who are battling COVID-19 are items such as ventilators (Artificial Respiratory Machine), non-invasive mask ventilation, BiPAP devices, finger-pulse oximetry devices and ABI real Time PCR. The list is tweeted here by our foreign minister Zarif.

Like any other country, we don’t have an infinite supply of medicine and medical supplies. But illegal U.S. secondary sanctions make it practically impossible for Iranians and Iran-based entities to import these medicines and medical equipment. Even when foreign suppliers are identified and we manage to purchase material from our external assets, myriad U.S. shipping, insurance, financial and banking unilateral sanctions make it nearly impossible to bring the material into Iran to help our efforts. The global community needs to recognize that U.S. actions and its misguided policy of “maximum pressure” are directly undermining our efforts to fight the COVID-19 epidemic in Iran.

Thousands of our citizens are currently stranded abroad, as these sanctions have wreaked havoc on air links to Europe and other places around the world. Such cruel measures have left thousands of Iranian families in additional, severe distress at a time of global crisis.

Our people cannot even access information from their own government about the spread of COVID-19 and ways to deal with it because of these illegal secondary sanctions. Tech giants like Google say they need to adhere to U.S. sanctions and have removed apps like AC19 - which was designed to help our citizens identify potential virus symptoms - from their app store. This is economic terrorism. This is medical terrorism.

HT: How have the sanctions imposed by the United States affected the fight against the disease in Iran?

Ambassador: The U.S. sanctions illegally imposed on Iran are having a major impact on our ability to fight this deadly disease. The U.S. government is imposing collective punishment on the Iranian people by depriving them of humanitarian trade, by undermining our economy, and by draining our resources.

Unlawful U.S. sanctions have exhausted Iran’s economic resources, impairing our ability to fight COVID19. At the same time, the U.S. administration is maliciously tightening illegal sanctions, with the aim of draining our resources even further. It seems that U.S. economic terrorism is now being supplanted by medical terrorism, and I believe the global community, especially European countries, should no longer be silent on this matter.

In a recent letter to the UN Secretary General, my Foreign Minister, Javad Zarif, has urged member states to disregard inhuman U.S. sanctions on my country and insist that they be lifted.

HT: Have European countries, or the United States offered a sanction relief because of the extraordinary situation?

Ambassador: We have received assistance from the World Health Organization, China, Japan and most recently our neighbours. We are grateful for all their support thus far.

In Europe, Iranian embassies and consulates, including our Embassy in Helsinki, have scaled up interactions with host countries and volunteer communities in order to facilitate the shipment of required medical equipment. However, there has currently only been one shipment of aid sent to Iran from France, Germany and the UK.

We hope that more countries will come to our aid at this time. This would help to highlight the fruitless approach of illegal and unjust sanctions against Iran.

HT: Iranians are resilient people and we can see that humour, poetry and love have been used by Iranians to lift spirits. Are there any other practices of the Iranian people or authorities that Finns might find useful at the moment?

Ambassador: It is times of crisis that really build a nation’s character. As you rightly mention, we are a resilient people. We have experienced war, draconian pressure campaigns and many other challenges. Through it all, Iranians have learned to hold on to hope by keeping their sense of humour and by recognizing the reality of the challenges we face. A virus like this doesn’t discriminate. It impacts the rich and the poor. The old and the young. So, we should all rally together and come together to fight this as one. It reminds me of the famous verse from Iranian poet Saadi Shirazi when he said:

"Human beings are members of one another,

since in their creation they are of one essence.

When the conditions of the time brings a member (limb) to pain,

the other members (limbs) will suffer from discomfort.

You, who are indifferent to the misery of others,

it is not fitting that they should call you a human being."

HT: What is your message to the Finnish and European governments and people?

Ambassador: My message is a simple one: at a time of global crisis we need to rally together to find ways to cooperate and support one another.

How does the world benefit when the Iranian people are deprived of vital medicine or access to information about the ways they can fight COVID-19?

It is immoral to impose unlawful restrictions on an entire country that renders it impossible for them to fight a deadly disease. It is as bad, if not worse, to observe this cruel inhumanity and remain silent.

It is time for European governments to turn beautiful words and values such as human rights, women and children’s rights, and the right to health into action. Helping each other in times of hardship is not only a fairy tale. It needs to be a reality for our common good. Dear Europe, you must disregard US illegal sanctions on Iran.

I also request that the European media takes action in these extreme situations and urge governments and authorities to help the people of Iran by disregarding unlawful US sanctions.

As a serious challenge to the international community, COVID-19 requires a globally coordinated response. Finland has always been known for its central role in crisis prevention, humanitarian efforts and peace building. It is time for Finland, in keeping with its historical constructive role, to join the Iranian people in demanding that the United States immediately halt all illegal sanctions it has unfairly imposed on my people.

I am certain that together we shall overcome this challenge and prevail against this disease.

This article is part of a series where Helsinki Times interviews female Ambassadors accredited to Finland.