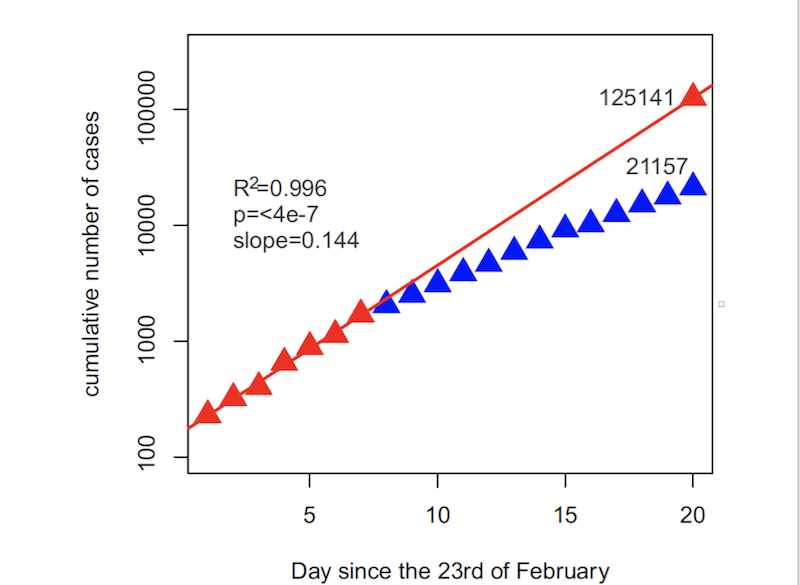 On the 23rd of February Italian authorities started to implement draconian measures including school closures which decreased the transmissions clearly.

As scientists, we are very alarmed by City of Helsinki’s decision not to close schools. According to THL, Finland is now in the epidemic phase of COVID-19. As in other countries, unless strong measures are taken, infections are expected to rise exponentially until a very large proportion of the entire Finnish population will be infected. Given current estimates of case fatality rate (3-4% according to WHO), and the necessity of intensive care for a significant proportion of the patients (in Italy 10%) this is an extremely worrying scenario.

Unless strong measures are taken to reduce the rate of infections, the public health system could collapse and tens or hundreds of thousands lives will be lost. Strong sociality reduction measures, if enacted swiftly and enforced strongly, can mitigate the worst outcomes, keeping the number of infected individuals within the capacity of our public health system. An article published recently on the Washington Post elegantly explain the effect of such measures using mathematical simulations.

It is within this context that we have been following with worrying attention the recent decision of Finnish government and the mayor of Helsinki, Jan Vapaavuori, to steer away, for the time being, from closing schools and kindergartens. This choice is very alarming, since there is scientific evidence that early school closure during an epidemic can significantly lower loss of lives.  Among the main motivations given by the mayor of Helsinki is that there is no scientific evidence that early schools closures would help. Instead, schools should be closed only after infections are detected.

Well, the mayor is getting his science wrong. A study conducted on the 1918 Spanish flu pandemic clearly showed that proactive school closures greatly reduced mortality rates. The earlier the school closures were enacted, the greater the number of lives saved.  There is also another argument for proactive school closures. During the epidemic phase of a disease, it is inevitable that most schools will be eventually closed. As the number of infected individuals increases to a significant proportion of the population, all schools will be closed anyway following the first confirmed case. One will have to close schools eventually anyway, but the longer one waits, the more lives will be lost, and for no good reason.

School closures could be even more important for COVID-19 than for the 1918 flu pandemic. A recent study shows that children are as likely as adults to be infected, but are often asymptomatic or develop weaker symptoms. That does not mean that they cannot contribute significantly to disease transmission. It is now clear that asymptomatic transmission can happen (see here and here), and that patients showing few or no symptoms can have moderate viral loads. At least one infant was found to have high viral load while showing no symptoms. This means that, if they keep going to school, kids could infect each other and spread the virus undetected. Reactive school closures (closing schools after a case is detected) is also likely to be very ineffective if THL policy remains to test only severe cases: children rarely develop severe symptoms.

Strong policies such as school closures are actually working in Italy. On the 23rd of February Italian authorities started to implement draconian measures including school closures. To see how this affected the number of new infections consider that the virus has an incubation time of 2-12 days. For the sake of argument, let’s assume this was an average of a week. Therefore, measures are not expected to have much effect for the first 7 days or so. Since the Italian Civil Protection agency started publishing data from the 23rd of February, we can look at the first week to get an idea of the growth of the epidemic with no containment. In the enclosed graph, one can see the cumulative number reported cases for the first week as red triangles. Growth is exponential (the y-axis is on a logarithmic scale).  A simple linear model for this period explains nearly perfectly the data, predicting a doubling time of reported cases roughly every 7 days (more or less what expected). If the number of cases had continued to increase following the same trend, the number of cumulative cases on the 14th March would have been over 120 thousand (red triangle on the top right). Instead, the number of reported cases was just over 21 thousand. The curve flattened, as shown by lower empirical values (blue triangles) than predicted following a lag time of one week. The result:  100 thousand fewers infections within three weeks. Given the very high case fatality rate reported in Italy (about 6%) it can be argued that strong measures, such as school closures, could have already saved at least 6000 lives. In reality, they saved many more as the public health system would have completely collapsed without them.

The scientific evidence is very clear, and now it’s a matter of political will how Finland should act. Our plea to the Finnish government is to take at heart the lessons from the data reviewed above: in order to save lives, school closures should be enacted immediately, as has been the case in many other countries across the globe.