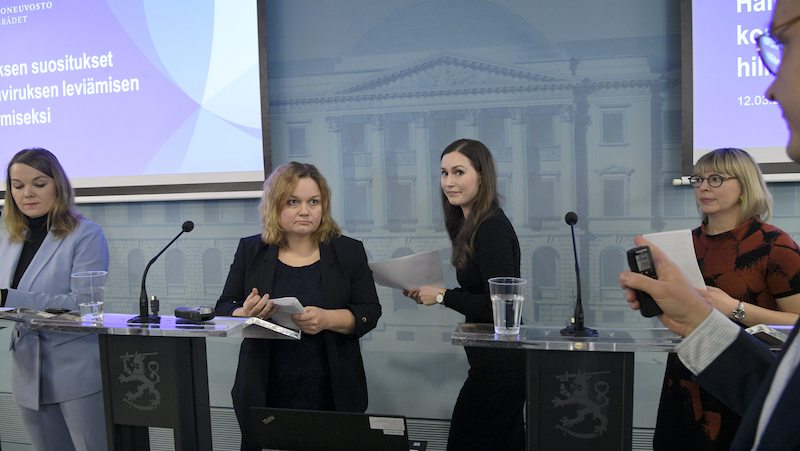 It was only a couple of weeks ago when the Finnish prime minister Sanna Marin, accompanied by Minister of Social Affairs and Health Aino-Kaisa Pekonen, Minister of Family Affairs and Social Services Krista Kiuru, and Minister of Finance Katri Kulmuni marched into a press conference and announced that there is no epidemic in Finland and not much needed to be done. At the time, there were only two confirmed cases of Covid-19 in the country.

Last Thursday, the same ministers walked in again in the same order to announce that now the epidemic in Finland can not be stopped, and the aim would be to slow its progress. The country has now over 240 confirmed cases, which is most probably a clear underestimate as the testing criteria in Finland has been tightened!

The confusing, teeth-less and insufficient measures announced by the government lacked decisive decisions needed in the present situation. The Prime Minister and other ministers simply read out recommendations of their civil servants who had advised them, much like a secretary or pr officer giving out a press release without totally understanding it. The announcement contained almost no decisions of their own, and the responsibility for action was passed to local authorities, schools, employers and ordinary people. The Prime Minister and her government were more afraid of stepping out of line and made the utmost effort to "go by the book", instead of grasping the extraordinary situation and taking proactive measures to avoid the dire situation seen in other countries. Leadership is not summing up the remarks of your subordinates but to take courageous action based on the information they give you.

The poor leadership and performance by the government incited several memes in the social media, among others a video clip from the comedy series "Yes Minister" where different stages of doing nothing are explained by the actors.

Some of the "recommendations" the quartet gave out were even outright harmful and baseless. As an example, the Prime minister announced that for anyone to get tested a GP has to give permission, after consulting an infectious disease specialist.

There are only around 100 infectious disease consultants in the country, and they all have better things to do in this situation and so do the GPs. The criteria of who should be tested are so simple that even a nurse can give a green light. Taking time out of two doctors' busy schedule for every testing decision is ridiculous. Finland has made the wrong decision with a conservative attitude on testing. If the problem is the lack of test kits, which is something the government must have thought of back in January, it should, and can be fixed now and must be done very fast.

Liberal testing of anyone suspected of carrying the virus has proven essential in fighting the outbreak.

Intensive testing and monitoring of patients in South Korea have resulted in the slow growth of new cases to the extent that now for the first time, numbers are decreasing. Authorities established hundreds of labs around the country where anyone with symptoms is tested via a drive-in system. A throat swap takes only a few seconds, and the results are ready in a few hours. China also used mass testing to its advantage in controlling the disease. When announcing the measures planned in the US, Nancy Pelosi explained the strategy to be based on: "testing, testing and testing."

Another confusing and illogical instruction the Marin government gave out was that all gatherings of under 500 people are ok to be held. When asked by journalists what that number was based on, the prime minister gave a long answer which when summarised, comes down to that the number is just a hunch.

One action the government has taken is to send a snail mail information letter in the two official languages to every household. This is basically a useless measure and waste of money, as the situation and information changes fast and people are following every bit of news on the topic. People are mostly aware of the turn of events and in some cases taking their own measures in the absence of clear and decisive leadership. On the other hand, there is only one phone number for people to call if they want to get the test or have questions. The number, as many have pointed out online, has a long queue and getting connected may take up to an hour.

The "wait and see" strategy the Finnish government seems to be taking would be understandable if Finland was the first country to get affected and there was no prior experience or models from other countries, but it is an outright stupid, irresponsible and fatal policy, when we have seen the situation in China, Iran, Italy, Spain and numerous other countries. Also, the trajectory of Finland's new infections looks worse than other Nordic Countries. On the 10th day after the first case, Finland's confirmed cases were 50% more than those of Sweden and Norway on their 10th days. We know where it's going, so wait for what?

In an open letter to the International community from Italy, signed by over 160 Italian and international scientists and academics, the authors urge other countries to take action rather sooner than later.

"This is an appeal to you, as a member of the scientific community, to urge your government to act now for actively stopping the virus," authors warn. "In most EU countries you have enough time to make a lockdown similar to China or South Korea to quickly slow down and stop the contagion with much less effort and cost of what is now needed in Italy. If Italy had strongly acted just ten days ago, and that is more or less where you are now, there would have been much fewer deaths and economical tumble."

Now Lombardy, the richest province of Italy with a well-developed health care system is on its knees and overwhelmed by the speed of the epidemic. Hospitals are over capacity and operation theatres are turned into ICUs.

There is a lot that can and should be done decisively NOW. Retrospective studies show, that during the Spanish flu epidemic, those states which implemented interventions such as the closure of schools, banning public gatherings and isolation and quarantine earlier and kept these measures in place longer, had greater delays in reaching peak mortality, had lower peak mortality and lower mortality rates in general. The benefits were significant.

We all knew that the virus is going to come to Finland, why didn't the government and the health authorities try to stop the epidemic with decisive measures before it lands in the country?

It is amazing that despite clear indication and obvious examples of how the disease spreads, Finland was caught almost unprepared for the spread and what comes with it. It is now clear that Covid-19 cases increase exponentially. Each infected person transmits the virus to two people on average. There are many measures which could and should be taken right away - even if stopping short of a lockdown - to change the trajectory of the epidemic in Finland.

Here are some examples:

Test everyone who has symptoms or even loosely matches the criteria. The importance of testing can not be overemphasised. Most people would not ask for a test without some basis. Negative results are as important information as the positive ones.

Send the non-essential army conscripts home. Army barracks are traditionally one of the most susceptible places for the spread of epidemics such as the coronavirus. Conscripts live and sleep in close quarters and are in close contact with each other. Unfortunately, the first infection of a soldier has already happened, but it is still not too late. Send them home now. You can always call them back if they are needed.

Close schools and recommend for ALL non-essential public gatherings to be cancelled. Limiting gatherings to 500 or 100 is just bogus. Once again, there is no reason to wait as we know what is going to happen. Schools are a major hub for the transfer of infectious diseases. Studies show that the sooner this measure is taken, the better the results. Special arrangement can be made for those families where parents have to go to work.

Make public transport free and encourage and facilitate cashless payments. Exchanging money for the ticket or interacting with the driver is a potential risk for spread of germs and so are banknotes and coins changing had in any other transaction.

Let everyone who can work from home do so. Not all jobs can be done remotely, but many can. Even reducing the contacts to the bare minimum is beneficial.

Keep people informed. No one should have to wait for an hour to get in touch with the dedicated phone number.

Facilitate isolation of the elderly and the chronically ill and arrange for grocery or food delivery for them. Severe symptoms have been most commonly seen in the elderly and those with chronic conditions. By making it possible for these groups, whether they live at home or in institutions, to have the least possible interaction with the public, we can reduce the risk of infection significantly. This is of utmost importance because this group is the one which will burden the health care system and will have the highest mortality.

Last but not least, prepare a sizeable financial aid for small and medium sized business, which will be hit hard by the decrease in clientele and closure due to the epidemic.

At the time of a Corona-like epidemic, Finland is probably one of the best places in the world to be. The country is geographically isolated, population density is one of the lowest, people take distance from each other by nature, and citizens are mostly well educated, obedient and trust the authorities. However, weak, confused and indecisive  leadership could wipe away all those advantages.

Editor in Chief of Helsinki Times

A medical doctor with a focus on Public Health and Epidemiology