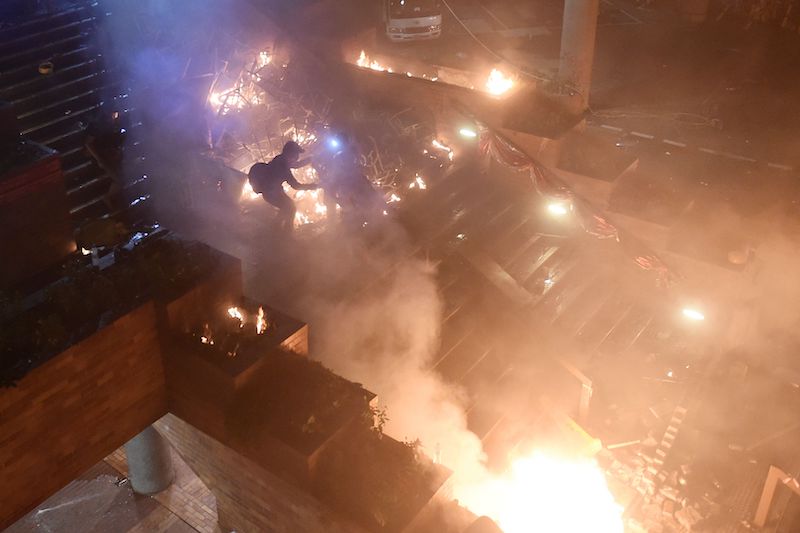 Anti-government protesters throw paper to fuel a large fire started by other protesters in a staircase at the main entrance that leads into the Hong Kong Polytechnic University in the Hung Hom district of Hong Kong on November 18, 2019.

Known for its rule of law and openness, Hong Kong is crowned as a shining Pearl in the East. But now, this bright pearl has been covered with dust by violence.

It is normal for different groups of a society to have different demands. It is also reasonable that people express their opinions through peaceful means. But behaviours such as vicious attacks against dissidents, vandalizing public infrastructure and inciting unrest are not tolerated and should bear legal consequences in any society.

However, violent beating of passers-by, throwing petrol bombs at the police and trains, igniting citizen holding different views with flammable liquid, damaging the city’s power facilities, blocking railway tracks, throwing objects at passing vehicles and people are all examples of violent and aggressive crimes that have been going on in Hong Kong recently. It seems that for those violent radicals, they can conduct violent and outrageous acts without being bound by law, as long as those acts are in the name of “democracy” and “freedom”.

In fact, those acts of violence and vandalism have gone far beyond rationality and legitimacy, overstepped the bottom line of law and civilization, severely trampled the rule of law and social order, and threaten the safety of people’s lives and property. The real purpose of those rioters is to disrupt Hong Kong, paralyze the government, incite unrest and destroy “one country, two systems”. They want to do whatever they want and force people to submit, or else to perish.

Should there be one standard and attitude towards violent, illegal acts? The answer is obvious, but the reality is depressing. Some external forces have contributed badly to this escalating violence. They use stark double standards to label Hong Kong police’s lawful actions “brutality”, regard riotous mobs on the street as “vulnerable” and openly endorse the violent offenders. Some media, unable to take off their coloured glasses, have carried out a large number of selective and distorted reports on the situation in Hong Kong, by covering up the violent acts of rioters and slandering the police for enforcing the law against violence. Such behaviour to openly bolstered radical forces and violent criminals is a flagrant betrayal of the human conscience and is contrary to the western values of the rule of law, democracy and freedom.

Hong Kong belongs to its people and the whole of China and embraces the world. A turbulent Hong Kong is not in the interest of any party. We oppose any external interference in Hong Kong affairs and will continue to resolutely and fully implement “one country, two systems” and firmly safeguard the prosperity and stability of Hong Kong.

At this point, ending violence and restoring order is the most pressing task, the broadest consensus and the strongest appeal in Hong Kong. We firmly support the Hong Kong SAR government led by the Chief Executive in governing Hong Kong in accordance with the law, the Hong Kong police in strictly enforcing the law, and the Hong Kong relevant body in bringing violent criminals to justice according to law.

Chen Li, Ambassador of People's Republic of China in Finland