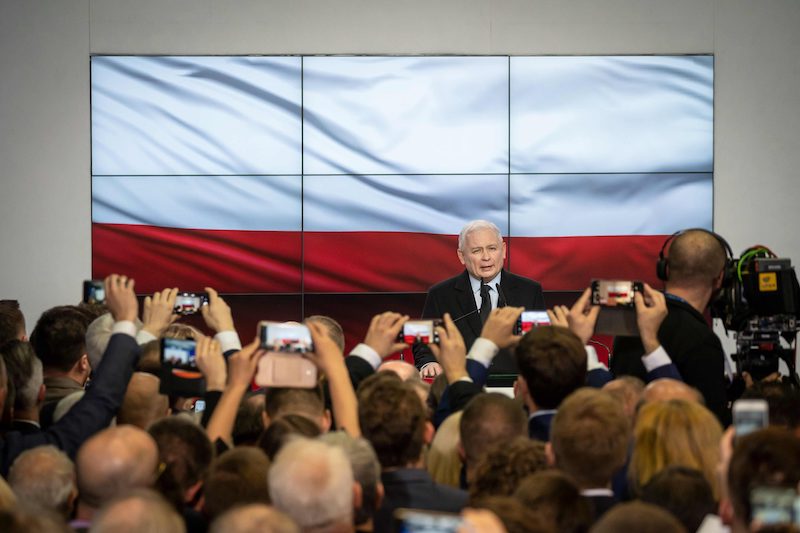 Leader of Poland's ruling Law and Justice (PiS) party, Jaroslaw Kaczynski reacts after the first exit polls during the party's electoral evening in Warsaw, Poland, on October 13, 2019. - Poland's governing right-wing Law and Justice (PiS) party won the general election in Poland, expanding its majority, according to an exit poll by the Ipsos institute. LEHTIKUVA / AFP

The Poles have voted: the populist party PiS is set to rule the country for another four years with a comfortable majority in the Sejm. More than 43 percent of the electorate supported PiS, which has been in power since 2015 – with its generous welfare spending and oversight of a well-performing economy cutting through to voters.

Yet, in the last four years, PiS has launched an unprecedented assault on the liberal democratic structures of the state. The party leader’s Jaroslaw Kaczynski has repeatedly portrayed Viktor Orban’s Hungary and Recep Tayyip Erdogan’s Turkey as models to be followed. And, though  his success last Sunday falls short of landslide victory, it does mark a watershed moment for Europe. It stands for the confirmation of a semi-authoritarian system (with a democratic mandate) in one of the largest and most important EU member states.

The hopes that the Poles would put an end to the experiment of Kaczynski’s ‘illiberal revolution’ have not been fulfilled. It is not that Kaczynski has conquered the hearts and minds of Poles. For, indeed, a new ECFR shows that the views of the majority of PiS voters on many issues (Europe, U.S., religion, public finances) are at odds with the  majority opinion of wider Polish society. Poland remains a deeply divided and polarized country, with 50 percent of voters rejecting the PiS and the far-right.

But Kaczynski’s offer of a ‘Polish model of welfare state’ – based upon direct money transfers, not public services – proved a successful formula. The desire to reap the benefits of the decades-long transformation became overwhelming, especially in the lower sectors of society. Child allowances, additional pension payments, and the promise of a record-high increase of the minimum wage, coupled with an aggressive propaganda by the government-controlled public TV outweighed concerns about PiS’ political hegemony.

The implications of PiS’ re-confirmation in power for Europe are twofold – and will be far-reaching.

The EU institutions and member states will have to deal with an emboldened partner, with a renewed democratic mandate. Against a backdrop of Angela  Merkel’s waning power, political instability in Italy and Spain, uncertainty in the French political scene, and the U.K. leaving the EU, Poland’s government will have one of the most solid domestic power bases in Europe. It remains to be seen how this room of maneuver will be used; although we know that the new EU agenda is, in many ways, highly problematic for Warsaw and at odds with the country’s traditional interests.

The idea of a Green New Deal as the EU flagship project irritates Warsaw. 80 percent of Poland’s electricity comes from coal plants, and, according to the ruling party, coal will remain the country’s primary well beyond 2040.  PiS’s hostility to this green agenda in Europe was evidenced, back in June, when it  blocked the EU carbon-neutrality goal for 2050.

The ambitions of Ursula Von der Leyen’s “geopolitical” European Commission’ have also raised eyebrows in Warsaw. For, while PiS lends support for the idea of a new industrial policy to strengthen Europe, it is skeptical of proposals to “beef up” the EU’s defense framework , which it sees as a project advancing mostly French and German interests. In the last four years Poland has invested a lot in the bilateral relations with the United States, and yielded agreements for stronger U.S. military presence in Poland.

Single market and migration are areas where Warsaw may not be inclined to accept the new policy trends, either. Higher protection of workers and consumers at the expense of market liberalization, as well as the pressure of the EU’s refugee policy, have not gone down well in recent times.  So, it’s likely there will be some pushback, in light of PIS’s new mandate – and a keenness to play hardball.

For the EU, Kaczynski’s Poland presents an unwelcome headache.  For it cannot prevent Poland’s, or any other countries, backsliding towards semi-authoritarianism. Nor can it ignore the disastrous implications of such a scenario. Pro-democratic governments and political forces across Europe need to realize that modern democracies usually die, not in revolutions, but step-by-step.

Yet, once this snow ball has started rolling, it is difficult to stop. In the first years of its rule, PiS took control of the public media, and the judiciary, in violation of the Polish constitution. In the next term it is expected to further strengthen its grip on the state through the already announced overhaul of the law courts, a clampdown on local government, checks on journalists and a partial ‘repolonization’ of the media. Hostile, state-organized rhetoric against minority groups (LGBT, migrants) is also expected to continue.

If Brussels and other democratic capitals want to avoid a contamination of the EU system, they should use the full range of instruments at their disposal: such as infringement procedures before the CJEU, Article 7, rule of law, conditionality of EU funds, and support for civil society. Political arguments will be no less important – and, as in relations with other external non-democratic powers, they should be vocal that ‘semi-authoritarianism’ is a clear violation of what Europe stands for, even with a renewed democratic mandate. 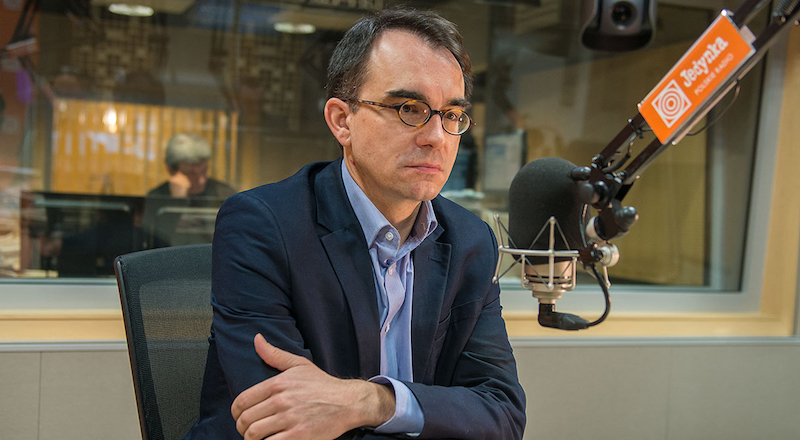 Piotr Buras is head of the Warsaw office of the award-winning international think-tank, the European Council on Foreign Relations (ECFR)