In this file photo taken on August 24, 2019 a woman shops for Chinese made shoes at a store in the Chinatown area of Los Angeles, California. - President Donald Trump's new tariffs on China are a "job killer," US shoe companies warned August 28, 2019 pleading for them to be removed. In a sharp deterioration in the US-China trade war, Trump last week ramped up the punitive duties for the vast majority of US imports from China.The five percent increases, which will take the tariffs to 15-25 percent, and are due to roll out in stages through December and target some popular items, such as laptops, mobile phones and some shoes. LEHTIKUVA / AFP

Recently, the trade war between China and the US has again dominated the media news headlines. On the 23rd, in response to the US tariff hikes on $300bn of Chinese imports, China was forced to take counter-measures to impose tariffs on $75bn of the US imports. Instead of reflecting on its own unilateral behavior, the US has taken steps to further aggravate trade conflicts, announcing higher tariffs on $550bn of Chinese imports and ordering the US companies to withdraw from China.

Previously, the US Department of Treasury had unjustifiably labelled China as a "currency manipulator". Such unilateral and bullying trade protectionism and extreme pressure actions go against the consensus reached by the leaders of China and the US, severly undermine the multilateral trading system and the normal international trade order, fully expose the insolence and barbarism of American trade bullying.

The world economy requires stable expectations. As the world's top two economies worth over $10 trillion, China and the USshould have worked together to promote the healthy and steadygrowth of the world economy. However, the US has gone against its words and irresponsibly escalated the trade frictions. Such actions violate the law of the market economy and the rules of free competition, threaten the global industrial chain and supply chain, jeopardize the global economic order, and eventually harm itself and others. On the 23rd, the three major US stock indexes and commodity prices fell sharply, which is a direct response from the market. Recently, the IMF lowered its forecast for global economy growth in 2019, citing economic and trade friction as one of the main downside risks to the world economy. The OECD’s latest World Economic Outlook report predicts that intensification of Sino-US trade friction might result in a loss of nearly $600bn in global GDP in 2021-2022. Finnish economists also pointed out that the indirect impact of uncertainty caused by the escalation of trade war will be even greater on other countries than on the US, and even greater onFinland with an export-oriented economy. In recent days, in additon to criticism from all walks of life in the US, the international community has also expressed concern about such behavoir of capriciousness and extreme pressure. During the just-concluded G7 summit, European leaders, including French President Macron, British Prime Minister Johnson and President of the European Council Tusk, have all called for avoiding further escalation of the trade war.

By bypassing the WTO dispute settlement mechanism and unilaterally provoking economic and trade frictions, the US is undermining the rule-based international order, which will inevitably lead to new distortion and structural imbalance in the world economy, causing further disorder for the global economyand trade order. The US acts at the expense of all countries that strongly support, participate in and benefit from globalization, with disastrous consequences for the future of globalization. We hope some in the US will listen more to the voices of American people as well as the international community, work out their own gains and losses, stop the wrong practices and return to the right track as soon as possible.

In the face of Sino-US trade frictions lasting more than a year, China’s position is consistent and clear. There is no winner in the trade war. China is not willing to fight. But if someone beats us to the door, we will definitely fight back to the end. China has full confidence, determination and ability to cope with various challenges and will never bow to any external pressure. As a responsible country, no matter how the external environment changes, China will unswervingly deepen reform and opening up, improve the economic structure, investment and trade environment, maintain the healthy and stable development of China's economy and foreign trade. We will resolutely safeguard the world economic order and multilateral trading system,firmly defend our legitimate rights, interests and the common interests of the international community, and promote the prosperity and stability of the global economy. 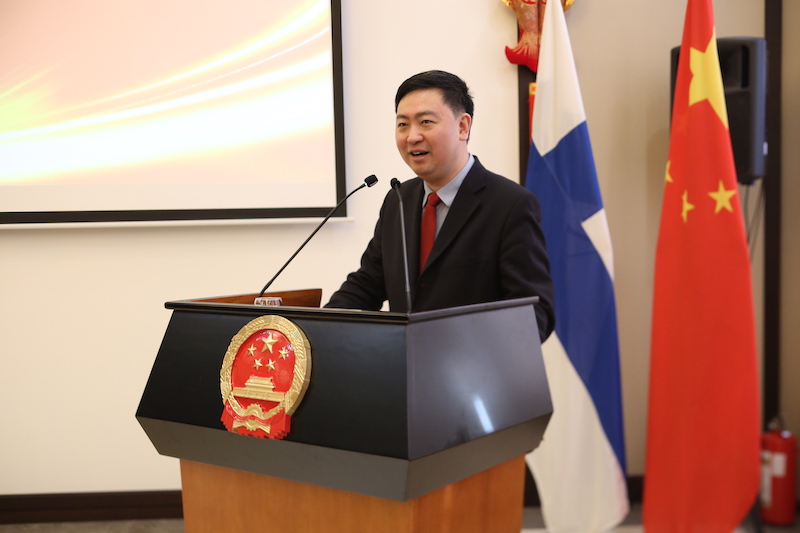 Ambassador of the People’s Republic of China in Finland

This is a "Viewpoint" column. The views and opinions expressed in this article are those of the authors and do not necessarily reflect the views or position of The Helsinki Times.