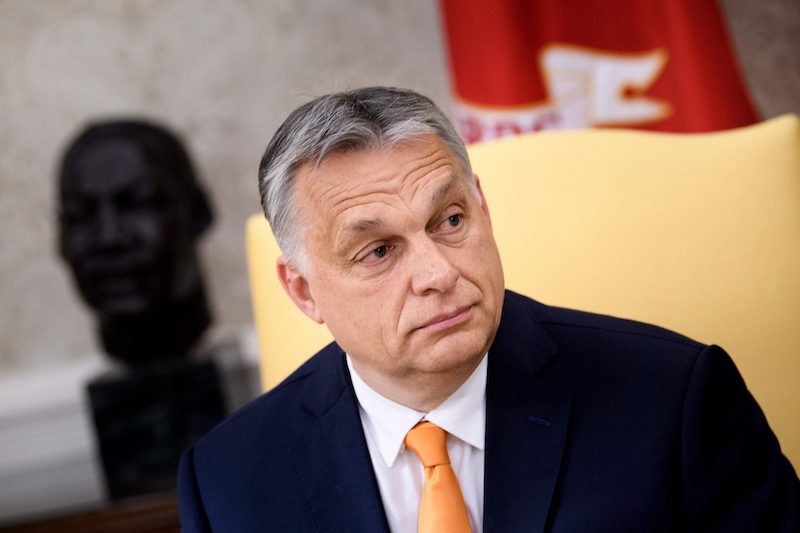 Hungary's Prime Minister Viktor Orban waits for a meeting with US President Donald Trump in the Oval Office of the White House May 13, 2019, in Washington...Lehtikuva, Creator: Brendan Smialowski

A new surprising addition to the long list of the Hungarian government’s enemies is Finland. Here is why.

“We need a nervous system, a strong nervous system, to enable us to show due respect, and answer questions politely – not with a smile or a laugh – when our Finnish friends ask us about and delve into the rule of law in Hungary” – said Viktor Orbán Hungarian PM in his opening speech at the 30th Bálványos Summer Open University and Student Camp.

The open university/student camp is a kind of sacred place for the Hungarian PM: it’s in the heart of Romania,  in a territory annexed off Great-Hungary 100 years ago. Orbán himself was one of the founders of this event after the regime change in both Hungary and Romania, when he was a young, eager liberal, financed by George Soros for his studies abroad. Interestingly, he holds his most indicative and telling speeches at this place every year.

Much has changed since the beginning: Orbán has not only changed his political views and policies (or at least the latter) turning his back on liberalism and George Soros, but also has assigned enemies after enemies: immigrants, left-wing and liberal politicians, homeless people, NGOs, the European Union, the United Nations, IMF, the aforementioned philanthrope and last but not least Norway and Finland.

Norway was at the center of attention several years ago, at the beginning of the anti-immigrant and - anti Soros campaigns. Back then Hungarian police raided two Norway-backed NGOs arguing that they are “tied to the political left-wing”.

And now Finland. But why?

Hungary has changed a lot since 2010. The country tried to have strong ties with the European Union earlier and it still does, but while its economic relations and funds coming from the EU has remained in place, the political views have been moving further away. Of course, Hungary is not alone; Poland, Italy, and even Austria are on a similar path. Many would however say, that Viktor Orbán’s government has gone too far resulting in the European People’s Party suspending Fidesz and the European Parliament having voted to trigger Article 7, putting in place sanctions against the Hungarian government. Article 7 is part of the Lisbon Treaty with the goal of upholding the fundamental rights and values of the EU.

Finland is pursuing a similar path: The newly elected Finnish PM, Antti Rinne said that during its term of European Council presidency his country will try to tie EU finding – a crucial income for Hungary – to the respect of rule of law.

If you ‘attack’ Hungary, Hungary strikes back. First the pro-government news site ORIGO published an article with the title Media pluralism is in serious trouble in Finland. One day later the paper published another one titled: There is no independent constitutional legal order, and later a third piece titled: The principle of Judicial Independence is Violated in Finland.

After ORIGO and other pro-government outlets established the discursive tools, Zoltán Kovács, Secretary of State for International Communication and Relations, International spokesman, Cabinet Office of the PM continued the ‘fight’ by publishing an article on the government’s official site with the title I bet you didn’t know this about Finland, claiming that Finland is “citing the usual, so-called ‘rule of law’ nonsense” even though the country “is not exactly a champion in the rule of law, per definition”.

– he wrote. In the article he reused the same arguments written before him in the Hungarian media: 1. The pluralism of Finnish media is under grave threat. 2. Finland doesn’t have the equivalent of a Constitutional Court. 3. Independent judiciary in Finland is non-existent.

And this didn’t stop: some days later Mr. Kovács reacted to Hungarian Helsinki Committee’s Facebook post about Hungary’s sad situation when it comes to the rule of law. As he put it: the “Soros-funded staunch opponent of Prime Minister Orbán’s government” failed to mention that while the quoted information “comes dressed up as a serious, data-packed, scientific document, in reality it’s a mere public opinion polling result mixed with leftish-liberal statistical wizardry”.

If you are wondering why a Hungarian official criticises these aspects of Finland and with this kind of tone, you should stop: it is better to get used to this level of politics when it comes to several EU member states. Mr. Kovács and Mr. Orbán are routined in these kinds of discursive tricks, delegitimising the ones who try to act against their policies.

In the past 9 years they have often done the same. When NGOs, the political opposition, the media and foreign political actors have criticised them, they hit back, reiterating: “They preach water, drink wine”. The conspiracy theories putting George Soros in the center of all this are helping the narrative: NGOs, politicians, governments, statistics, opinion polls, official reports from the EU, UN or other official sources are only part of the Big Evil Plan: destroying Hungary’s government in order to end Christianity and national consciousness in Europe so that the so-called ‘population exchange’ can finally happen, making the liberal elite powerful again.

So, is it a solution to answer?

Ville Cantell, Director of the Unit for Communications on Europe and Neighbouring Areas at the Ministry for Foreign Affairs reacted to criticisms coming from the Hungarian Government Tweeting that they need “a cool head and steady hands” and that these are ”attempts to discredit us”. He then attached World Press Freedom Index’s report with Finland ranked at the 2nd place while Hungary is the 87th.

But is this enough? World Press Freedom Index is also part of the Big Evil Plan, if needed. There is space on that list for Finland also, as we saw. Reality doesn’t bother this kind of discourse: in the era of post-truth the loudness and amount of lies are more important. And because Fidesz-friendly media dominates Hungary, this won’t be an obstacle at all.

But there’s good news as well: Fidesz’s main goal is always to win at home – the EU affairs come second. It happens often that despite the communication they push, they vote together with other member states and follow rules. When they criticise Finland, they only want their voters to believe and of course, they know that others wouldn’t. But again: they don’t really think that the Finnish government will be intimidated. If they can’t win on international territory, they still win at home. This is the lesson of the past 9 years.

Attila Kustán Magyari is a Hungarian journalist from Romania, currently starting his studies in Tampere University.

This is an opinion piece and published as is. Helsinki Times is not responsible for the content and the opinions and viewpoints do not necessarily represent publishers opinions.