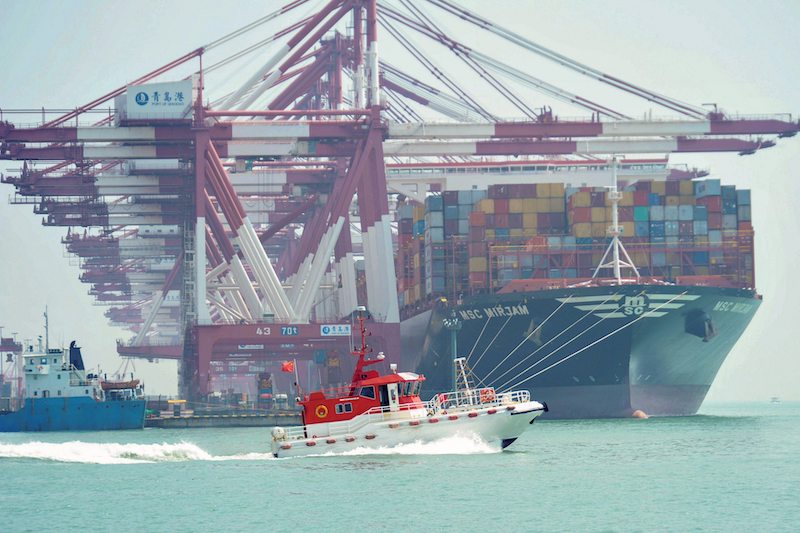 A boat sails past as a cargo ship berths at a port in Qingdao, in China's eastern Shandong province on June 10, 2019. - China's exports beat gloomy forecasts to rebound in May though imports sank more than expected as the trade war with the United States heats up, official data showed on May 10. (Photo by STR / AFP) / - LEHTIKUVA / AFP

Currently, the so-called Sino-US economic and trade friction and its affiliated issues have become a heated topic worldwide, and drew intensive attention from all countries including Finland. As a follower of this matter, I would like to share some of my personal observations.

Firstly, trade conflict prompted by the US affects many countries and many areas in the global market, and goes far beyond China-US trade issues. As the world’s second largest economy, China is a main victim of the US’s tariff sticks. After 11 rounds of consultations, the US suddenly threatened to raise tariff rates on China.

Not long after that, the US Government made another threat to impose tariffs on all imports from Mexico, starting from a 5% tariff to 25% at most. After that, the US terminated preferential trade status for India. Although the US paused its tariff plan on Mexico, it is worth mentioning that the reason for imposing tariff is migration. Apparently migration and tariff are totally different issues. And we can see that tariff and other trade tools have been politicized and weaponized by the US. Similarly, during China-US trade negotiations, the US Government tries its best to kill Huawei, a private company through rough administrative measures. It cited the so-called security reasons for rationalizing its action, and at the same time claimed that Huawei could be included in the negotiating deals. The self-contradiction showcases the US’s aim is not “fair” trade, but hidden political purposes, which is restraining China’s development, with trade and technology as its tools and weapons. Even more dangerously, some US officials fabricated the so-called “clash of civilisation” theory, attempting to define international relations according to races and cultures, provoking ethnic and cultural confrontations.

Secondly, trade friction harms global value chains, hampers investment confidence and erodes the rule-based international order. It can be said the US was the main contributor to the international order formed after WWII. But now the US is trying to destroy it with its utmost efforts. As a result, multilateralism and free trade are being beaten by unilateralism and protectionism in the US. “The jewel on the crown”, namely WTO’s dispute settlement mechanism is fading. The US Government accuses China of “distorting markets”, and waves its tariff stick. In addition, the US has ordered companies to cut supply to Huawei and forced countries to abide by its order claiming otherwise these countries would bear consequences. Facts say clearly who are distorting markets with administrative measures. And typical double standards apply here. Nowadays, the division of labor develops toward greater specialization and the global value chains are highly mature, especially in high-tech fields. If a large company is interrupted by non-market forces, numerous upstream and downstream enterprises will be affected. At the beginning of this year, the World Bank and the IMF lowered expectations for 2019 global growth because of trade protectionism. And the IMF further pointed out that trade conflict will curb world’s economic growth and weaken the not-so-strong investment. Many experts echoed these opinions as they believe that a trade war cannot solve problems, nor will there be winners out of a trade war.

Thirdly, China’s positions on China-US trade negotiations are consistent and clear, as we always stick to the spirits of equality, mutual benefit, good faith and credibility. For China and the US, cooperation can lead to mutual benefits while confrontation will do no good to anyone. The Chinese Government has released China’s Position on the China-US Economic and Trade Consultations, pointing out that consultations must be on a mutual-respect basis, and the right to development cannot be sacrificed, still the less can sovereignty be undermined. We must ensure that the two sides in the consultations operate on an equal footing, that results are mutually beneficial, and that any final agreement is a win-win one. Negotiations will get nowhere if one side tries to coerce the other or if only one party will benefit from the outcomes. Every country has its own matters of principle. During consultations, a country’s sovereignty and dignity must be respected. On major issues of principle, China will not back down. China does not want a trade war, but it is not afraid of one and it will fight one if necessary. China’s position on this has never changed. In the meantime, China will continue to deepen reform and opening up. China’s door will not be closed; it will only open even wider.

China and Finland are both active participants and beneficiaries of economic globalization, contributors to global governance and world’s growth. As an export-oriented economy, Finland has made outstanding achievements in the fields of ICT, clean tech, forest industry, healthy food, design industry, winter sports, and so forth. Many Finnish companies own edge-cutting technology, and they need markets, international division of labor and global value chains. Under protectionism and tariff sticks, Finland will inevitably suffer. Back to the very beginning of the current US administrations, a think tank of Finland published a report, predicting that Finland could be one of the worst affected EU countries and Finland’s GDP would decrease 0.1 to 0.5 percentage points, should the US’s tariffs fully implemented. We firmly believe that with joint efforts, China and Finland will continue our cooperation to address challenges of anti-globalization, unilateralism, protectionism and trade bullying, support multilateralism and free trade, and maintain the functioning of global value chains, supply chains and industry chains, bringing more benefits to countries and peoples all over the world.