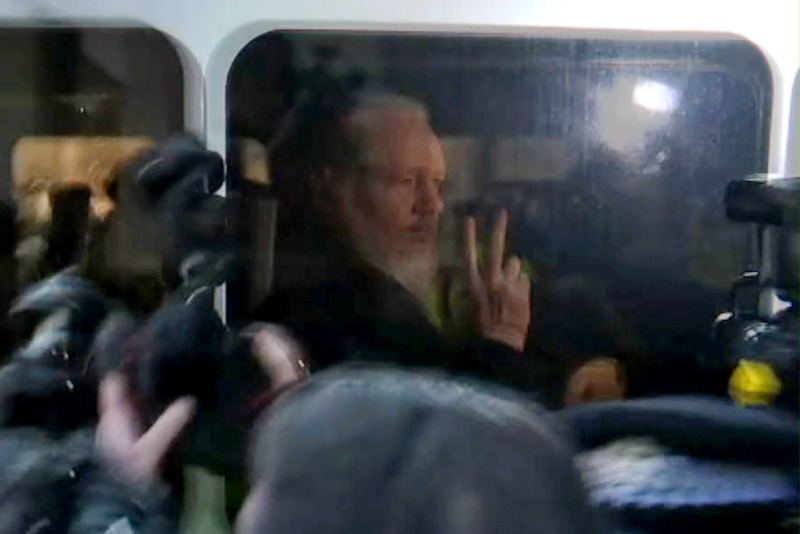 A video grab taken from AFP TV footage shows WikiLeaks founder Julian Assange as he is driven by British Police to Westminster Magistrates Court in London on April 11, 2019. - WikiLeaks founder Assange appeared in a London courtroom on Thursday, hours after being arrested in Ecuador's embassy on an extradition request from the United States and for breaching bail in Britain. (Photo by - / AFP) - LEHTIKUVA / AFP

British police immediately arrested him -- supposedly pursuant to his "crime" of jumping bail on an invalid arrest warrant in an investigation since dropped without charges but, as they admitted shortly thereafter,  actually with the intent of turning him over to US prosecutors on bogus "hacking" allegations.

The US political class has been after Assange for nearly a decade.

In 2010 WikiLeaks, the journalism/transparency service he founded, released information revealing US war crimes in Iraq and Afghanistan, as well as State Department cables exposing -- among other things -- Hillary Clinton's attempts to have American diplomats plant bugs in the offices of their UN counterparts (Clinton, at one point, tried to raise the possibility of having him murdered for embarrassing her so).

In 2016, WikiLeaks released Democratic National Committee emails -- provided by an as yet unidentified whistleblower -- exposing the DNC's attempts to rig the Democratic presidential primaries in Clinton's favor.

At no point has Assange been credibly accused of a crime. He's a journalist. People provide him with information. He publishes that information. That's an activity clearly and unambiguously protected by the First Amendment.

Even if Assange was a US citizen, and even if his activities had taken place in territory under US jurisdiction, there's simply no criminal case to be made against him.

So they're manufacturing one out of whole cloth, accusing him of "hacking" by asserting that he assisted Chelsea Manning with the technical process of getting the 2010 information to WikiLeaks.

But once again: Assange is not a US citizen, nor at the time of his alleged actions was he anywhere that would have placed him under the jurisdiction of the United States.

Even if he did what he's accused of doing, the current state of affairs is the equivalent of the city government of Chicago asking Norway to extradite a French citizen on charges of not cutting the grass at his villa in Italy to the specifications of Chicago's ordinance on the subject.

There are certainly criminal charges worth pursuing here.

The US Department of Justice should appoint a special counsel to probe the Assange affair with an eye toward firing, seeking the disbarment of, and prosecuting (for violations of US Code Title 18, Sections 241, Conspiracy Against Rights, and 242, Violation of Rights Under Color of Law) the DoJ bureaucrats who hatched this malicious prosecution.

The first step in the process, though, is for US president Donald Trump to pardon Julian Assange for all alleged violations of US law on or prior to April 11, 2019.

Assange is a hero. Time to stop treating him like a criminal.