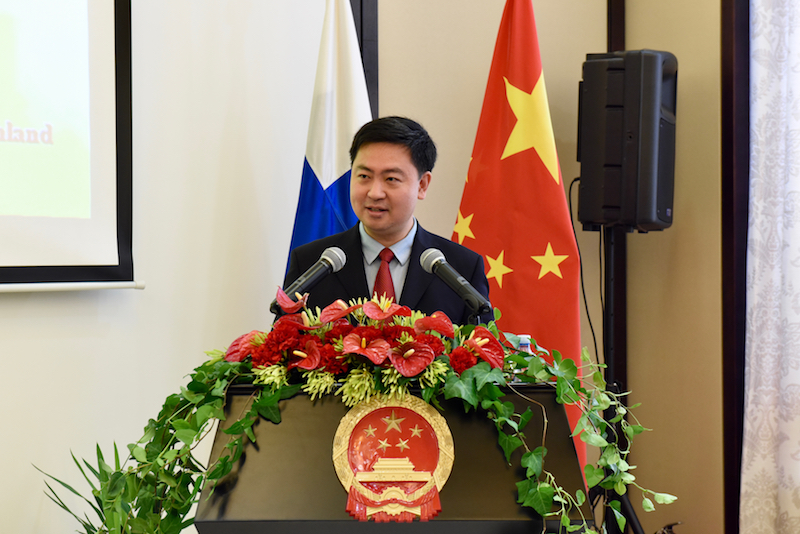 19th National Congress of the Communist Party of China

Where is China heading for? What does China’s rapid development mean to itself and the world? The most accurate answer may lie in the outcome of the 19th National Congress of the Communist Party of China. The congress elected a new leadership with Xi Jinping as the core, defined its new historic juncture in China’s development, and blueprinted the overall plan for securing a decisive victory in building a moderately prosperous society in all respects and embarking on a journey to fully build a modern socialist China.

It is a remarkable milestone in China’s history, which is going to positively and profoundly impact the world, and will undoubtedly bring in a dynamic power pushing forward China-Finland relations.

The Congress clarified the strategic vision for developing socialism with Chinese characteristics in the new era. In order to realize the historic Chinese Dream of national rejuvenation and based on a comprehensive analysis of the international and domestic environments and the conditions for China’s development, the congress charted the timetable and road-map: the period between now and 2020 will be decisive in finishing the building of a moderately prosperous society in all respects. From 2020 to 2035, on the foundation of moderately prosperous society, China will see socialist modernization basically realized with a further 15 years of hard work. From 2035 to the middle of the 21st century, from the basically achieved modernization, with a further 15 years of hard work, China will develop into a great modern socialist country that is prosperous, strong, democratic, culturally advanced, harmonious, and beautiful.

The Congress clarified that China will remain fully committed to an economic policy which suits the dimension of its national context. China will continuously deepen reform in every field, applying the new vision of innovative, coordinated, green, and open development in common interest, promoting sustained and sound economic growth, and developing a modernized economy. China’s economy has been transitioning from a phase of rapid growth to a stage of high-quality development. It will pursue supply-side structural reform as main task, to work hard for better quality, higher efficiency, and more robust drivers of economic growth. It will accelerate the building of an industrial system, to promote coordinated development of the economy with technological innovation, modern finance, and human resources. It will develop advanced manufacturing, to promote further integration of the economy with the internet, big data, and artificial intelligence. It will promote green development and actively act on environment issues such as air pollution, water pollution and soil pollution, to intensify the protection of ecosystems, replenish environmental regulation system and solve prominent environmental problems, supporting a green, low-carbon, circular, and sustainable way of life.

The Congress clarified China’s will for major country diplomacy with Chinese characteristics. China will bear the wellbeing of mankind in mind, holding high the banner of peace, development, cooperation, and mutual benefit, to forge a new form of international relations featuring mutual respect, fairness, justice, and win-win cooperation, to create a community of shared future for mankind, and to build an open, inclusive, clean, and beautiful world that enjoys lasting peace, universal security, and common prosperity. China will remain firm in pursuing an independent foreign policy of peace, never seek hegemony or engage in expansion, standing for equality of all countries, big or small, strong or weak, rich or poor, thus to develop global partnerships and expand the convergence of interests with other countries. Confronting various global challenges, China is ready to work with other countries, to reform the global governance system towards a more equitable and legitimate way, to promote economic globalization, and to tackle climate change, protecting our planet for the sake of human survival.

The Congress clarified the growth strategy of implementing the innovation-driven development, in order to become a global leader in innovation. China will prioritize innovation in key generic, cutting-edge frontier, modern engineering, and disruptive technologies, underpinning its strength in science and technology, product quality, aerospace, cyberspace, and transportation. In 2016, China’s R&D expenditure amounted to 2.11% of its annual GDP, scientific and technological progress accounted for 56.2% of the country's economic growth. Besides the four great inventions of ancient China, which had a great impact on the development of world civilization, the “four great new inventions”, i.e., high-speed rail, dockless shared bicycle, mobile payment, and e-commerce, have shed new light into the phrase “innovated in China”. China’s development is now, and will be powered by innovations which will provide more supports for the future of the world and generate more pleasant surprises.

The Congress clarified that China will make new ground in pursuing opening up on all fronts. China will seek mutual benefit and develop with its doors open wide. With international cooperation through the Belt and Road Initiative, to achieve policy, infrastructure, trade, financial, and people-to-people connectivity and thus make new ground in opening China further through links running eastward and westward, across land and over sea. Giving equal emphasis to “bringing in” and “going global,” China will expand international trade and diversify investment, build a new platform for international cooperation to create new drivers of shared development. In order to further open up its market to the world and facilitate international trade, on 5th - 10th November 2018, the first China International Import Expo will take place in Shanghai during which companies from more than 100 countries and regions are expected to attend, showing China’s sincerity in sharing opportunities and seeking mutual benefits. In the coming 5 years, China will import $ 8 trillion worth of goods, attract $ 600 billion of foreign investment, meanwhile outbound investment will reach $ 750 billion, outbound tourists amount to 700 million, signifying the spillover effect of its development upon the world.

For decades, China values its relations with Finland. During the year 2017, which marks the 100th anniversary of Finland’s independence and 67th anniversary of China-Finland diplomatic relations, the bilateral relations achieved historic breakthrough. At the invitation of President Niinistö, President Xi Jinping concluded a successful state visit to Finland, first of its kind in 22 years. The heads of states confirmed the establishment of the future-oriented new-type cooperative partnership. As a follow-up, Prime Minister Sipilä visited China for Summer Davos Forum. Finnish Parliament Speaker Ms. Lohela has also accomplished her first official visit to China. The frequent exchange of high-level visits have deepened cooperation in all respects. From Januaray to August of 2017, the bilateral trade reached $4.7 billion, seeing a 9.9% year-on-year increase, which keeps China being Finland’s biggest trading partner in Asia for 14 consecutive years and fifth trade partner globally. During the same period, the overnights that Chinese tourists spent in Finland increased by 39%, ranking first in growth among all countries. Besides, bilateral relations have succeeded with significant achievements in terms of investment, clean energy, environment, arctic, education, sport, etc.

Stepping into the new era, China’s vigorous development will bring in an unprecedentedly vast prospect to the China-Finland relations. Recently, China-Finland Committee for Innovative Business Cooperation was established, a new freight rail connecting Kouvola and Xi’an kicked off, all these endeavors will definitely invigorate new vitality to the economic bond between China and Finland. Furthermore, what we will see in the near future are new airlines opening, giant pandas coming, more interaction between twin cities, and enhanced practical cooperation at all levels. China is ready to work together with Finland for a better future of bilateral relations.