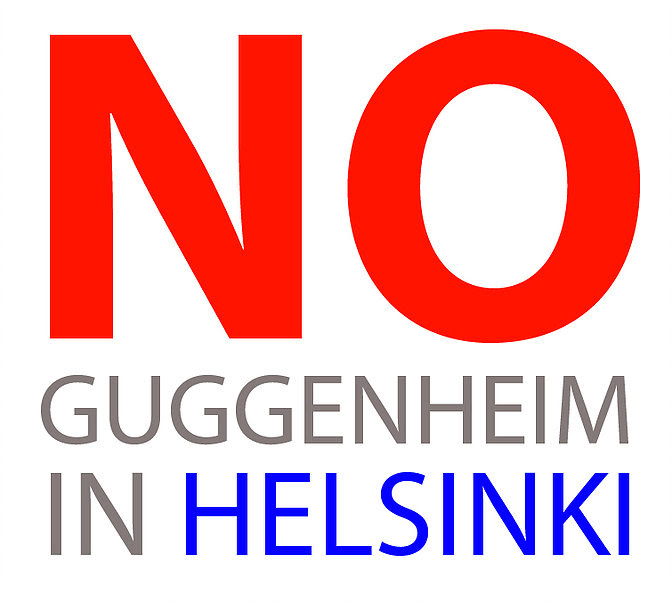 A working democracy is based on an informed society. For that to work, the process is equally as important as its outcome and its recycling:
I eat a sausage if it is tasty but I will not do so if I know it’s made out of rat meat, it involves cruelty, unfair trade, etc. The same applies to the plan to build a Guggenheim Museum in Helsinki, Finland. At first glance, anyone would love to have another cultural institution nearby. But this Foundation is the rat sausage we should be banning. Here is why:

Think about the 7 million euros yearly which will be the running price paid by taxes from Helsinki. This means that every one of us who pays taxes in the capital will be paying a membership fee for this museum without having been asked for it. A membership fee of over 30 euros for each one of us every year. On top of that, the museum will charge entrance fees for us, as well as the tourists. By comparison, we have the Amos Anderson [2] museum, which is privately funding its new museum in the city center.
On top of that comes the construction of the building, which is another 80 million from our taxes (some 200 euros from each one of us for that) and handed over a top land piece just in the heart of Helsinki.

If approved, I suggest we then have a new optional tax clause for the citizens of Helsinki as we have for religious taxes; we should call it THE STATUS TAX. Whoever wishes to pay for the Guggenheim Museum from their taxes can click on it. If this goes ahead without these providences, I can see the start of a new business model where everyone asks for such a helping hand on the pretext of tourism and prestige! I know I will.
I suggest that universities apply for such a business model to compensate for the recent budget cuts. For example, the Aalto University with its Alvar Aalto designed buildings, which attracts many tourists to Helsinki, should apply for an equal sum on terms of a fair opportunity clause.
If Guggenheim wants to open a museum in Helsinki or anywhere else, they should do so at their own costs.
It creates social injustices
Within their own foundation (I prefer calling it a company), they have wage gaps of 450 fold. For example, the director of the foundation, Mr. Armstrong, receives a salary of over 650,000 dollars/year, in comparison with the migrant workers of the Guggenheim Museum in Abu Dahbi who receive 1500.
And ask yourself how is it possible that a so-called museum affords to pay such a fat salary? What is the role of a museum and how is a private institution able to pay such fortunes to its board?
It sells status, rather than promoting critical thinking
Museums are now absorbing the capital surplus, as David Harvey puts it, and its function is becoming that of status, promoting the brand of the cities. The example of Bilbao is a clear one, and one that the Salomon Foundation often uses as selling argument. The political choice of building it there was many-folded; one of such reasons was to dramatically change the image of Bilbao from that of a Basque terrorism hub into a modern, cultural city. It worked, partially. But do not be fooled by the numbers of the so-called Bilbao effect: the city is in full debt and the promised benefits of this museum are far from real. The economy of the city remains as equally troubled as it was before the Guggenheim.[3] The forgotten point here is that around the museum there was a full urbanization plan of the city, which enhanced the area (one might say, gentrified it) and the same benefits would have been reached with the promotion of a local museum or local artists instead of importing the Guggenheim brand, which relies on its network of art dealers and art speculation.
My favorite definition of art is inspired by the writings of Oscar Wilde: "An artist does not search for recognition of its work, but an artisan does." The Jeff Koons or Richard Serras of our time, and others that Guggenheim supports, are artisans. Their workshops are fabrics employing artisans who produce objects of status, not of art nor of critical thinking. The industry around these objects is immense and it increases the gap between rich and poor. The Guggenheim is a rich man's playground. The Guggenheim Museum should be called a private gallery as there are many cases of the business link between their exhibitions and sales. [4]

It foments competition, not collaboration
The Guggenheim Foundation has been bullying cities all over the world for years to build their franchises, enforcing competition and not collaboration (collaboration is a fundamental cornerstone of the Finnish society):
"Despite all its frantic activity, the Guggenheim could not generate enough revenue to stabilize its budget. It has been forced into a constant search for new sources of cash. They have no endowment to speak of – it’s been spent to meet the running costs, which has left it very fragile. It’s a vulnerable institution." [5]
Certainly not collaborative is the workers exploitation in Abu Dhabi’s construction site! A clear example of a competition-based enterprise. The polemic has been massive on allegations of safety regulations, unpaid workers, and low wages to migrant workers. [6]
To conclude:
The Guggenheim Foundation bullies our government for enormous financial subventions, enhancing corruption. We need to be asking the question, why on earth would Guggenheim want to build a museum in Helsinki, a city with 83 museums and St. Petersburg just next door with the Hermitage? They have tried it in so many other cities, and in all of them, failed due to corruption allegations.
All but Abu Dhabi, which we all know stands for far different values than those of Finland, and Bilbao, which was desperate to change the status of the city from one of Basque Terrorism to cultural hub as stated above.
Helsinki is now sadly one more on that shameful list and we should ban the Guggenheim Foundation from here and other places from its parasitic behavior with these attempts. It uses its network of influence of business men and politicians to force this agenda with the false and shallow pretext of status. (Remember that the city of Vilnius refused and banned Guggenheim a few years ago. A case that involved much corruption: "As reported by the newspaper “Lietuvos Rytas” (Lithuanian Morning) on 5 February, Helsinki and the Guggenheim Museum have signed a feasibility study agreement, so the possibility of renewing the project in Vilnius will not occur again because two similar museums in the region are not needed."[7])
We must fight for a meaningful allocation of our limited resources and for social welfare, not for rich man marketplaces.  Finland stands for a fair and open society. These status symbols, with their secretive agendas and competitive history, have no place in the land of open source Linux.
--
[1] Based on the article of Helsinki Sanomat: ” Supporters unveil new funding plan for Guggenheim Helsinki“ by Aleksi Teivainen
[2] https://amosanderson.fi/fi/
[3] In “The Thing about Museums: Objects and Experience, Representation and Contestation“ by  Sandra Dudle et. al.
[4] Cf.” Is this the end of the Guggenheim dream?“ by Deyan Sudjic
[5]Cf. “Why No Guggenheim Museums?“ by Pedro Aibéo in Dissident Voice:
[6] Cf. : http://www.aibeo.com/no-guggenheim-in-helsinki
[7]  cf. “Guggenheim Museum initiative in Vilnius to be taken over by the Finns “
---
Pedro Aibéo is a trained Design Architect (M.Sc., Dipl. Ing., TU Darmstadt, Germany) and Civil Engineer (M.Sc., Licenciatura, FEUP, Porto) with over 50 buildings designed and built in 15 countries. He is also a Visiting Associate Professor at UNAM University, Mexico, and at Wuhan University of Technology, China, and a Lecturer, Research Assistant, and Doctoral Candidate at Aalto University, Finland, on "Architectural Democracy". He is the founder and Artistic Director of “Cidadania” theatre+games group, Germany, with written and directed theater plays at the United Nations and the Staatstheater Darmstadt on urban slavery and astronomy. He is a professional musician at "Homebound" and the founder and Chairman of the "World Music School Helsinki ry”. He is a drawing teacher at the croquis nights in Helsinki and a comic novel writer on mathematics. He is a published current affairs author in several newspapers.