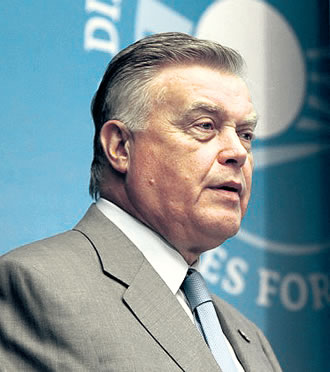 How have sanctions affected your activities?

From a professional point of view, not much. Just few days ago I participated in the European Railway Summit in Berlin and sat around the same table with CEOs, including heads of British and German railways and the president of co-rail. From the point of view of actual sanctions, I can live without kangaroos because, as you know, I am sanctioned by Australia in addition to the US. God knows why. Fortunately, there are no railways between Russia and Australia.

Of course, we have some pressure for the country from the point of view of accessing the financial markets. We have had economical problems in Russia even without sanctions and the sanctions now prompt us to look at what can be changed in the paradigm of the economical development of our country. The sanctions have, on the other hand, created a unification of the society on a unique scale, which the political parties had not been able to reach with all of their propaganda efforts before. Today, 84 per cent of the population supports the policies of the President of Russia and that is also unique compared with, say 13 per cent of some European presidents.

You have referenced in past interviews that you have good ties with chiefs of railways and European businessmen. Why are you not on the European sanctions list?

First, this is not my first year in office. Since the start of my career I have been decorated eight times by orders from, among others, France, Italy and Austria. So they have seen my work as important and positive for their countries. Second, we are deeply integrated with European railways in terms of passenger and cargo traffic and nobody has found that my activities and professional deeds to have been against the interests of railways in Europe. So, there is no reason for the European Union to sanction me. Actually, I don't see any practical reasons for the US administration to sanction me. The explanation that he is in good terms with the Russian leadership is foolish. Take any leader of railways in Europe, he is inevitably on good terms with the head of the government.

Genadi Timshenko, who is also on US – but not the European Union – sanction lists, told news agency Itar-Tass, that to avoid provocations of the CIA he does not travel outside Russia. Even so, when his family leaves for their traditional holiday in the South of France he does not go with them. Is that a serious risk or is he being extra cautious?

I know Genadi. He is my good friend in St Petersburg and I can only say that he has solid grounds to be concerned. The CIA is not a kindergarten.

Did something happen to Timshenko in Finland?

Not in Finland or Europe – but one of his associates was detained and interrogated in the US without any grounds.

Are you equally concerned when you move in Europe?

You know, if the heads of states name you "enemy of the state", I should consider that it might be, if not dangerous, but risky. But having this in mind, I am not going to change my life style or the style of my work.

Do you expect the European Union to harden sanctions on Russia and possibly add you to the next sanction list?

Judging by the way that Brussels has followed strong intimidation – if not orders – (by the US) to sanction Russia and Russians, it is possible. We have a saying: "To be more saint than the Pope". So, in terms of presenting oneself or one state as so-called liberals, and to ensure the United States that they can rely on the EU for the future, they could invent something.

But I doubt that this would be the course of developments in relations between Europe and Russia. It is obvious that the world's economy would not be sustainable without Europe, without Russia or the US. The world is like a small flat for housing mankind – so sooner or later these kinds of deeds and approaches should be changed.

Do you think the situation with sanctions will change?

Sanctions, once implemented, are very difficult to lift. It should be taken down step by step. Even if the US and the EU would say that they would lift the sanctions today, it will take at least a year for it take full effect.

Is your company also looking at member states individually? Do you talk directly to their governments?

As far as economical relations are concerned, I have never experienced any hardship on the part of my partners, companies or any circles.