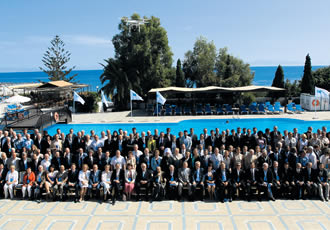 "On the threshold of the third millennium, the destiny of our world is shared by all. In order for this destiny to be a just and prosperous one, there exists no choice but a dialogue among various cultures and civilisations. If the axis of the 20th century was the force of the sword, and with each sweep of the blade some won and some lost, the main axis of the coming century has to be that of dialogue. Otherwise, the sword will become a double-edged weapon, sparing no one; and it is not inconceivable that the mighty warmongers would be among its first victims. This is a direct consequence of globalisation." – Mohammad Khatami, president of Iran, in his statement to the UN General Assembly on 29 October 1999

When Iran's President Mohammad Khatami coined the term "dialogue among civilisations" in his 1999 UN speech, he could not have imagined how accurate his prophecy about the other option, a "double-edged sword", would become. Our world has had more swipes of the sword and less dialogue since then.

But the notion of a dialogue among civilisations did start an undercurrent for the violent mainstream of the new century. One of the initiatives has been the conference, The World Public Forum – Dialogue of Civilizations, which has been held on the Greek island of Rhodes since 2003.

But why Rhodes? "When the four of us, (founders of the forum) were sitting together – that was former Indian Prime Minister Gujral, the late Jagdish Kapur, myself and the Greek American Papanicolau – and we were thinking where to hold the first forum, Papanicolau told us a legend that in ancient Greece people believed that the gravity of Rhodes was less than the gravity of entire Greece. So they were holding jumping championships here in Rhodes," explains Vladimir Yakunin, the founder-president of the World Public Forum (WPF). "So we thought, that if it was true for physical elevation, why not intellectual. So we selected Rhodes as the site of the forum. " 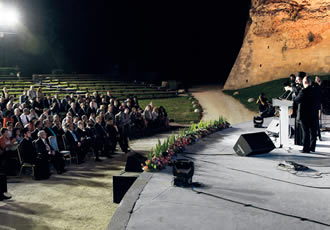 From swords to dialogue

For the past 12 years the Rhodes Forum has brought together scholars, political and spiritual leaders, civil society organisations, scientists and the media to discuss their worries and concerns about our global destiny and try to steer the axis away from swords and towards dialogue.

In addition to the main World Public Forum arranged in Rhodes once a year, a youth forum began in 2010 and several regional sessions and conferences are arranged in different countries. WPF has had special consultative status with the United Nations Economic and Social Council since 2013. This year's speakers included Milos Zaman, the President of the Czech Republic

"I am a father of two, a grandfather of four and I was brought up with the concepts of rights and responsibilities," says Yakunin. "So this idea was very natural for a responsible person, if you want to make this world better for kids."

"I believe there should be a unification of efforts by different players and intellectuals in order to introduce solid and practical instruments to influence political layers of different countries in order to stand firmly against any attempts to ruin the peace – like it happened in the First and the Second World Wars," explains Yakunin.

"There is one similarity between now and the time before the start of the First World War 100 years ago," says Walter Schwimmer, former secretary-general of the Council of Europe and co-chair of the Forum, "and that is the so-called autism of the governments – where they are unable to listen or communicate properly with each other."

The Forum is a refreshing gathering of critical voices. The status quo of the world's politics, the hegemony of the United States, the obedient role of the EU, the role of the US and Arab states in the development of the ISIS, as well as the debt-powered raw capitalism; these are all challenged and criticised.

The four plenary sessions covered an array of topics from, 'Ghandi's and Tolstoy's culture of non-violence' to 'Peace and Security in Europe and Asia in the context of US power'. Plenary sessions were followed by several workshops on related and current topics, from social media to Christianity in the MENA region.

The session was moderated by Dr Hans Köchler, professor of the University of Innsbruck and the president of the International Progress Organization. Prof. Kelsey's presentation shed light on the little known rising trend of using investment treaties as legal weapons, and how Western states, the US in particular, establish rules to enforce private-capital agreements with other sovereign states. "Back in 1997, there were almost no investment disputes, while there were 274 cases concluded in 2013. Investors won seven out of eight of those cases. Argentina, Venezuela, the Czech Republic and Egypt were the main targets and losers of these cases – 75 per cent of which were brought on by US and EU investors."

Christopher Black and David Holie spoke of the corruption, bias and racism of the International Criminal Court (ICC), with examples of how witnesses and lawyers had been intimidated and how the court is riddled with western intelligence agents.

But what about the sanctions and the Ukraine conflict, how have these affected the Forum and its organisers? "We have had over 1,000 applicants from which we selected and invited 400. So the interest to participate has been much higher because of the present situation," concludes Vladimir Yakunin.

Videos of all of the Forum's presentations are available online at wpfdc.org.