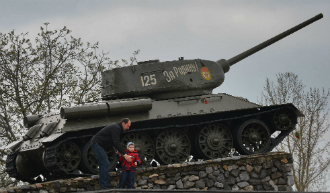 With the golden hammer and sickle on flags fluttering on public buildings and the monuments to Lenin, Tiraspol does little to hide where its heart lies.

The city of 135,000 is the capital of Trans-Dneister, also known as Transnistria, a sliver of territory that runs along the border of Moldova and Ukraine. When the Soviet Union headed toward collapse in 1991, it wanted to remain part of the dying confederation as an independent republic, instead turning into an unrecognised breakaway patrolled by peacekeepers. As regions of Ukraine follow Crimea and agitate to return to Russian control, the people of Tiraspol are dreaming again.

"We are glad for Crimeans, that they started to live better," said Natalia Efremova, 49, a saleswoman in a bookshop in downtown Tiraspol. "Now people are satisfied there. They are Russians now. They returned to Russia and their children will study in Russia, and they will have jobs there."

Trans-Dneister is where the freedoms and wealth of Europe attracting Moldovans and western Ukrainians have collided with the old Soviet world and the perceived security of Russia for more than two decades.

As pro-Russian demonstrations in eastern Ukrainian cities turned more violent this week, regional lawmakers in Tiraspol submitted a request to President Vladimir Putin and the Russian Parliament to recognise Transnistria as a sovereign state.

"It's the eternal question for them," said Fyodor Lukyanov, head of the Council on Foreign and Defense Policy in Moscow. "It puts Russia in an awkward spot, obliges Russia to take steps and it's not clear where they lead to. The standoff with other countries will escalate."

Moldovan Prime Minister Iurie Leanca's government said the plea to Putin by the "Supreme Soviet" of Transnistria "ignored an objective reality" that the region is part of the country. Putin Thursday called it one of the most complicated problems that Russia inherited after the Soviet Union's demise.

The Russian government urged talks over the future of the disputed region. Putin said armed nationalist groups from Ukraine had moved to the border and any blockade of the region must be stopped. The Ukrainian ambassador to Moldova said last month his country had increased border checks.

"People have their own vision of how to build their future, their destiny," Putin said in a televised question-and- answer session in Moscow. "This is nothing else but an exercise in democracy if we let those people do what they want."

Trans-Dneister has a population of about 500,000 and the vast majority is Russian-speaking. Russian companies account for 60 to 70 per cent of the region's industrial output, according to data from the Tiraspol legislature's website.

The enclave is 4,160 square kilometers (1,606 square miles), or about 12 per cent of Moldova, which is Europe's poorest country based on gross domestic product per capita statistics compiled by the World Bank.

For Denis Tsaran, 28, only independence will do, he said as he waited in a café in Tiraspol near the maternity hospital where his wife was giving birth to their third child, a girl.

"I want the situation to be settled for my children, so that they can have their own flag, their own passports and it should all be legal," Tsaran said, interrupted by calls from relatives and friends as he toasted his new arrival with local brandy. "We will strive for that."

Tsaran owns freight forwarding company Limex Service in Tiraspol, nominally Moldova's second-largest city. In front of one government building, there's a statue of Bolshevik leader Vladimir Lenin surrounded by beds of flowers. A bust of Lenin stands in front of the city's council, which is located in the House of the Soviets, built during the Stalinist era. Street names, billboards and posters are written in Russian.

To the west of Tiraspol lies Bender, a frontier town used on the Dniester River, which forms the natural division between Moldova and the secessionist region.

On the bank of the river, a tank with a camouflage net looms over the border crossing. A red and green flag of the unrecognised republic flaps in the wind.

There's a slogan in Russian painted on a concrete fence in Bender: "Russia is the guarantor of peace and stability."

Bender is where the most recent bout of fighting started in 1992 and eventually left about 1,170 people from Moldova and Transnistria dead and almost 1,800 injured.

"People already were killed, and they were killed enough," said Lilia Trofimova, a 30-year-old from Tiraspol. "Nobody wants a repeat of war."

Rather than renew a conflict, Moldova is preparing to sign an association agreement with the European Union by the end of June to foster trade and cement a recovery in its $7.5 billion economy. GDP expanded 8.9 per cent last year.

For their part, Transnistrians are concerned more about financial and trade sanctions than bloodshed. Their 1.05-billion-dollar economy depends on Russian assistance and is plagued by corruption and organised crime, according to Washington-based democracy watchdog Freedom House. It grew 2.4 per cent last year, said the region's president, Evgeny Shevchuk.

"If Moldova signs the agreement, the iron curtain between our countries will increase," said Alexander Leanca, deputy chairman at Transnistrian Republican Bank, the central bank for the territory. "For Transnistria it means full destruction of the economy. It will be like an economic blockade."

Leanca said he remembers the poverty, devastation, hunger and looted stores in 1992 and rules out military action. Now there's help from Putin.

Tiraspol hasn't paid for Russian gas since 2009. It owes Russian state-run monopoly Gazprom about 4.5 billion US dollars, Alexander Gusev, president of utility Moldovagaz, said at the end of last year. Though companies and individuals pay for it, the government uses the money to cover its budget deficit, which reached 27.3 per cent of GDP last year.

Russia is financing an increase in pensions with a payment called "Putinka," named after the Russian president.

"He will not leave us to die," Leanca said in his office. "There will be no blood here. Economic sanctions are possible, but I really doubt Moldova will go to war with Russia."