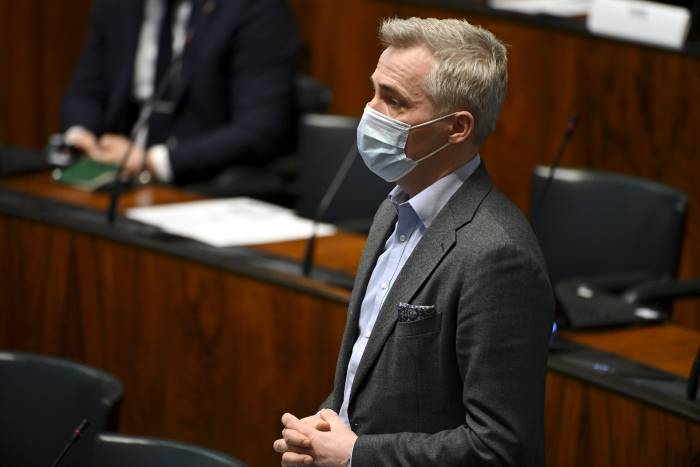 How much outwards can you move your walls before your roof collapses? Should the driving force of a party be an ideal, a shared group of values, or is it primarily a tool for executing power, whatever the cost?

Of course, we can agree to disagree on practical matters, on how to reach our goals. That’s where policy comes in. And every party needs discussions on those.

Whoever has spent some time on social media during the last years – and I sure am one of them, having lost many hours of my prime, hours I can never get back – can’t help having noticed that certain questions divide us. And I mean really divide us. Some questions lure out the trolls from the darker caves of the internet. Questions like gender equality, minority rights – whether we talk about sexual or ethnic minorities, international matters such as the EU, and of course, the elephant in the room: immigration.

These are also questions that we feel strongly about. That’s why the conflicts these questions create tend to be strong.

The National Coalition Party, Kokoomus, has experienced this first-hand. Last weekend their candidate for mayor in Helsinki, Kirsi Piha, dropped out of the race along with another high-profile candidate. Allegedly because she felt that she couldn’t cope with the wide range of opinions on certain matters of principle and values that existed within the party. Much had changed in her party since she left active politics over a decade ago.

In the Finnish political discourse of today the opposition is happy to call the government leftist. And of course, technically it is. But the contents of the government program can hardly be described as very leftist. The tax and business policies aren’t leftist. The foreign policy isn’t either. The education policy isn’t – unless you call investments in education socialism. The efforts that so far have managed to curb the Covid-19 crisis certainly aren’t.

But yes – it is a government that feels that minority rights are important. Humanitarian issues and international cooperation too. Yes, it certainly can be called progressive.

In this situation the opposition has to criticize the value base of the government in order to justify its own existence. And when your partner in the opposition is the Finns party you easily wander out in deep waters, over your head.

And strange waters they are. The question of al-Hol, an easy question from a legal standpoint, became a matter of opposition policy. Minister for Foreign Affairs Pekka Haavisto became a target of intense criticism after he committed an error in a personnel matter — something that probably was against the law, but that nonetheless can’t be viewed as something especially serious. And one wonders: is it really the Kokoomus Party’s line to stop all immigrant integration work, according to how parts of its parliamentary group voted a year ago? And the EU recovery package, a package that any party would have accepted had they been in power, has made Kokoomus stumble in the area of EU policy, where it usually is a healthy pragmatist.

In opposition most questions are easy. But that’s exactly why it might be difficult to act according to one’s principles. The hard questions are harder when the easy way out is void of consequence.

Step by step, parts of Kokoomus have wandered in a direction that evidently made Kirsi Piha feel that her party wasn’t her home anymore.

The lure of the populist right is obvious. It happens all over Europe. And I can’t avoid thinking that nationalism and xenophobia that are tokens of its extreme forms are feelings that really benefit from the rise of social media as a platform. Algorithms that feed off feelings – and anger more than joy – intrinsically push negativity ahead of constructive positivism. And political parties follow, everywhere. The unbearable lightness of the easy answers is too hard to resist.

I see my party on the liberal bottom half of the political spectrum, to the right of the centre line. I really do think that there are many people who thrive here. And I am certain that this is where the good ideas that build society are born.

Here live those, who believe in the market economy but respect minority rights. Those who want entrepreneurship but also global responsibility and open borders. Those who see climate action as paramount but rely rather on systemic attitude change than mere restrictions and prohibitions. Those who believe in protecting the rights of the individual but at the same time see the need to help those less fortunate – whether they are close by or farther away.

My party could do better here. We certainly have space to grow. In many ways the struggles of Kokoomus is an opportunity for us, if we can take it. But Finland as a whole needs more parties that view the world as something where tomorrow is better than yesterday. Because populism not only breaks society, it also eventually breaks the parties that fosters it. That’s why I hope that whatever internal struggles Kokoomus at present is going through end with the progressive, tolerant side winning. Because we all need partners.

Anders Erik Gunnar Adlercreutz is a Finnish architect and politician, representing the Swedish People's Party of Finland in the Parliament of Finland since 2015. He was elected to the Parliament from the Uusimaa constituency in the 2015 election with 3,337 votes. He was re-elected as MP in 2019, garnering 9,425 votes.