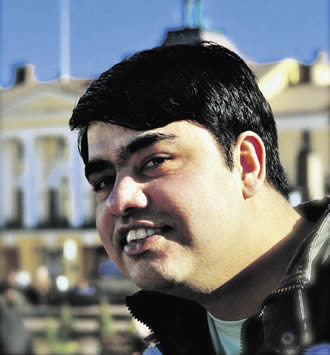 Having lived in Finland for nearly six years now, Finland has been a second home to me. It is a wonderful country to be in but I feel Finland as a country is not properly marketed around the globe.

I personally think that Finns are well educated, well informed, and knowledgeable. When I say I am a Nepali, unlike many of their European counterparts, they never confuse me for being an Italian from Napoli (or Naples).

Finns are generally known to be quiet and like to remain low profile. This is true to some extent, but, once mingled, Finns have a great sense of humour, and sarcasm. For example, there were no demonstrations and stone pelting when a New Zealand minister publically criticised Finland a couple of years ago, or when an article was recently published in an international magazine that mocked Finland.

Nevertheless, they are always ready for some friendly banter and tongue-in-cheek replies.

One Finn in particular was very annoyed when a Nepali posted their view to an online forum saying that people in the world, especially Nepal, have no or limited knowledge about Finland. They replied, "Well, yes, see now we're limited in our resources. We don't have a mad prince killing the king, no Maoist rebels, no mountains people come to visit, and nobody offers a goat to get the airplane fixed... so what do the people in Nepal know about Finland? Are there a multitude of Finnish restaurants in Kathmandu?"

Finland maintains one of the best living standards in the world. Finns are very pragmatic and the simplest of issues are taken care of, which is not always the case, even in most of the developed countries. For example, it is very easy to clean windows in Finland, as all the windows open inwards. Even in developed countries many window-cleaning companies earn their livelihood just because windows open outwards.

Finland is a country with high moral values, and honesty. Also, the obedience of values is a high priority as seen a recent test where Helsinki residents returned 11 of the 12 wallets that were purposely dropped – the best in the world. Adherence to law is so high that people do not cross the street on a red light even if no vehicles are seen on the horizon.

Every hill has a valley, so everything is not rosy in Finland. First and foremost is the language. There are many jokes about difficulties of Finnish language like: "Which is the most heavenly language? Finnish, because it takes an eternity to learn". The second important issue would be the weather. Also, social life in Finland is what makes it a difficult place to live in. Even the people living in the same apartment hardly talk to each other and young ones live away from their parents. Unlike most Eastern countries, you will find most of the students living in student apartments despite their parents' beautiful house being located nearby.

Having said that every rose has a thorn and Finland has been wonderful second home to me.