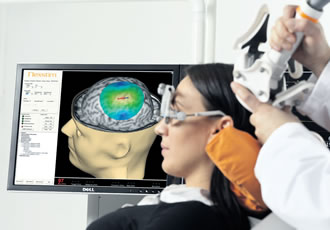 A Finnish company is changing the way doctors understand and treat the brain.

THERE is a reason the phrase “it’s not brain surgery” is a common idiom. Compared to brain surgery, almost anything is easy. The human brain is a strange, magnificent and little-understood organ, and when brain surgery is necessary it can be a complicated and daunting undertaking.

A key problem is that each brain is unique, in that the organisation of areas controlling movement, sensation and language is different for each person and can be significantly more so in patients with brain disease. Yet the Finnish company Nexstim has developed technology to make understanding and treating the brain easier.

“In Navigated Brain Stimulation (NBS), magnetic pulses applied over a patient’s head leads to activation of underlying brain cells by the induction of electric fields,” explains Nexstim’s CEO Janne Huhtala. “In patients diagnosed with brain tumours or epilepsy, NBS can be used for creating a map of the brain’s vital functions, revealing which parts of the brain are critical for the control of movement and speech.”

NBS uses magnetic resonance image guidance and unique electric field modelling to produce maps of the cortex as accurate as those obtained using surgery and direct stimulation. The information can then be used to decide between various treatment options. If surgery is necessary, the information helps the neurosurgeon to preserve the vital areas of the brain while removing diseased tissue. Yet NBS can do more than diagnostic mapping.

“For depressed patients, NBS offers a non-systemic treatment option, lacking the side-effects of drugs or electroconvulsive therapy,” Huhtala continues. “In depression treatment, stimulation is targeted to a region of the brain, which is known to have reduced activity in people suffering from depression.”

For the patient, Navigated Brain Stimulation is non-invasive, painless, and fast: a session can be over in thirty to forty minutes. For the physicians, Nexstim’s technology and technique allows perspicacity in a notoriously opaque environment.

With such an important product and service, Nexstim has attracted the attention of a variety of investors. Early on, many of its investors were Finnish, but as the company has grown and developed an extensive intellectual property portfolio it has gained international investors.

In 2001 the Finnish Innovation Fund Sitra invested in Nexstim, and in 2007 and 2009 Sitra was joined by Finnish Industry Investment, Olli Riikkala, the Dutch powerhouse Life Science Partners, and the Swedish group HealthCap. Last year the investment group became more diversified, with the Finnish insurance group Ilmarinen, Capricorn from Belgium and Lundbeckfonden hailing from Sweden. The last round raised a significant sum, 13.4 million euro.

“Through its investors, Nexstim has gained a considerable amount of valuable connections and visibility, and has benefited from the investors’ expertise in life sciences,” says Huhtala. “For example, Lundbeckfonden, as the main owner of the international pharmaceutical company Lundbeck, has provided Nexstim with insight on the central nervous system diseases and helped to lay the path towards therapy indications and markets.”

After the last financing round, the company has added to the sales force, stepped up their marketing efforts, developed the first version of a system dedicated for use in therapy, and launched NexSpeech, a technique to map eloquent speech areas of the brain.

With the aid of the last financing round, Nexstim has enjoyed a superb 2012. NexSpeech was cleared by American regulators for use in pre-surgical mapping of eloquent speech areas of the brain in conjunction with the Navigated Brain Stimulation system.

“Applications for reimbursement codes for navigated transcranial magnetic stimulation in cortical mapping and surgery planning have been granted in the USA and Germany, supported by the neurosurgical associations in both countries,” Huhtala says. “Nexstim will also soon be releasing exciting news about extending its product line to include a system specifically designed for therapy applications, including depression and stroke therapies.”

Nexstim now has approximately 100 NBS installations around the world. In Germany, it is used by nine of the largest and most advanced neurosurgery departments.

“In North America, NBS is currently used in six centres for neurosurgical planning, including the world-leading cancer and neurosurgery centres MD Anderson and UCSF. In addition, it is used in more than ten other sites in research or therapy applications,” Huhtala points out. “In the USA, interest has been especially high in paediatric neurosurgery, with three paediatric centres having purchased and installed our systems recently.”

Huhtala is enthusiastic about Nexstim being based in Finland. He cites the advantages of Finnish funding agencies, three of which have invested in the company. He also points to the cluster of companies and education institutions in the medical field as an asset.

“Since the beginning, Nexstim has benefited from being close to a world-renowned centre of expertise in biomagnetism and medical imaging,” he says. “The technological foundations of the NBS system were laid in the various research projects that were carried out at Helsinki University.”

He explains that southern Finland has a wealth of companies in medical technology and biotechnology that makes it easy to find partners. In addition, the Finnish education system has produced an abundance of skilled and innovative engineers.

Looking back at his time with Nexstim, Huhtala finds many memories that stick out. He mentions approvals by national regulators and peer-reviewed articles proving the effectiveness of their technology and techniques.

“It is very encouraging that NBS has been endorsed by neurosurgical societies and key opinion leaders, but what is truly satisfying is the enormous amount of feedback we have received from the users on how our technology has changed their approach to neurosurgery and the way that they can now give patients and their relatives the information crucial for selecting the most appropriate course of treatment in very difficult circumstances.”