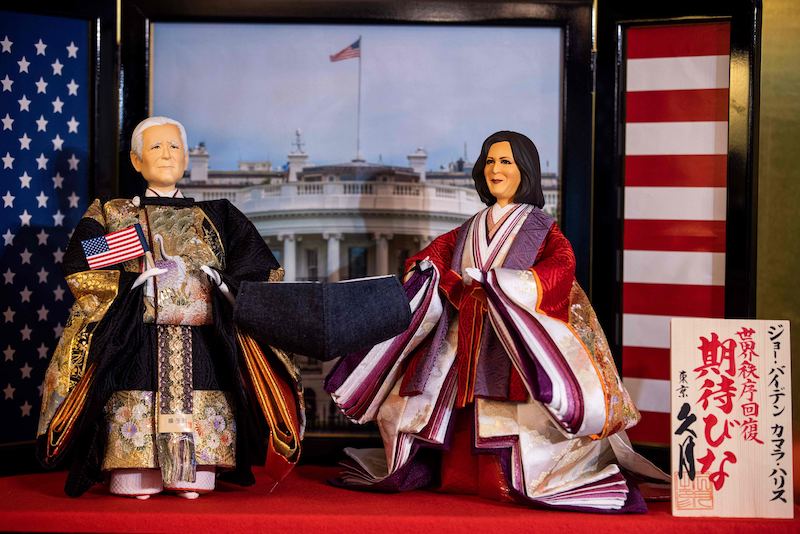 Japanese doll maker Kyugetsu displays "hina" dolls of US President Joe Biden and US Vice President Kamala Harris attached with a face mask at the company's showroom in Tokyo on January 28, 2021. LEHTIKUVA / AFP

Joe Biden’s election has profound implications, not just for the US but for the world.

DONALD TRUMP’S kicking-and-screaming exit from the White House was monumentally good news for the US. It was also terrible news for Jussi Halla-Aho, the leader of the True Finns, Nigel Farrage in Britain and Marine Le Pen in France.

These international reverberations have gone largely unnoticed in the US, where many Americans have been celebrating the replacement of a wannabe autocrat with a leader of character and quality.

The guardrails of democracy, stress-tested as never before in the history of the nation, ultimately held.

Trump expected “his” hand-picked federal judges to do his bidding, saving him from the will of the voters. But in more than forty cases, judges rejected his outlandish claims.

The president whom a close associate called a monster—the narcissist who tried his damndest to overturn the election results and, when that ploy failed, tried to foment an insurrection—has been driven into exile. Now he rusticates in Palm Beach, Florida, playing golf, awaiting his second impeachment trial and plotting his revenge.

Trump has no use for the system of government that the U.S. constitution prescribes. As president, he was a destroyer who, as New York Times reporter David Leonhardt summarized, “sought to undermine Americans’ confidence in the F.B.I., the C.I.A., the military, Justice Department prosecutors, federal judges, politicians of both parties, the Congressional Budget Office, government scientists, government health officials.”

Sadly, millions of Americans have bought this message of conspiracy and distrust from the man who lied more than 30,000 times while in office. The most enduring impact of Trump’s misbegotten presidency may well be that he unleashed the American id. It will take a long time to put the genie back in the bottle.

It is infinitely easier to tear down than rebuild, and reconstruction is Joe Biden’s task. He has started by cleaning house, replacing Trump-appointed hacks with well qualified staffers. And beginning on his first day in the White House, he has been issuing executive orders to nullify some of Trump’s most egregious actions.

No more border wall, no more “Muslim ban” on travel to the US, no more prisons run by profiteers, no more kleptocracy—twenty-two orders in just his first week on the job.

COVID is, of course, Trump’s most consequential and calamitous failure. You can draw a straight line between his epic misdirection, as well as his public-health-defying, mask-mocking behavior and hundreds of thousands of needless deaths, nearly half a million and counting. COVID is Biden’s top priority, and with competent leadership from seasoned public health professionals, his goal of 100 million vaccinations in 100 days is within reach.

The ramifications of Trump’s loss extend far beyond the borders of the US. For one thing, the nation will reenter the world stage, after having been a laughingstock for four years.

Trump made the US a pariah among democracies. He quit the World Health Organization and reneged on the Paris climate agreement. He muttered about leaving NATO and the United Nations. He cozied up to dictators and dissed America’s friends.

It will take time for other countries, reeling from Trump’s abusi, to trust the US again. Biden is doing his best. Among his first acts was to rejoin the World Health Organization and the Paris climate accord. He has signaled his desire to restore the Iran deal that Trump ripped up. Biden, who has forgotten more about diplomacy than Trump ever knew, is anxious to restore the country’s status as a respected player on the international stage.

Self-styled populists took their lead from Trump, hoping that his success would rub off on them. Purporting to speak for the disaffected, they have treated democracy as nothing but a rhetorical trope, believing that a leader can do whatever he or she wants and get away with it.

As Trump once said, “I could stand in the middle of Fifth Avenue (in Manhattan) and shoot somebody and I wouldn’t lose voters.” But his defeat says otherwise.

There is a limit to what these self-proclaimed populists can get away with. They ultimately fail when they bump up against the reality of governing. They have not prevailed in countries like Finland and France, where democracy is a vibrant idea and not a dead letter.

There is no telling what damage a second Trump administration would have done. That’s why so many Americans are rejoicing—Biden’s victory keeps democracy alive. His election is also very good news among democracies worldwide.

David Kirp is a professor of public policy at the University of California at Berkeley and a contributing writer to the Helsinki Times.