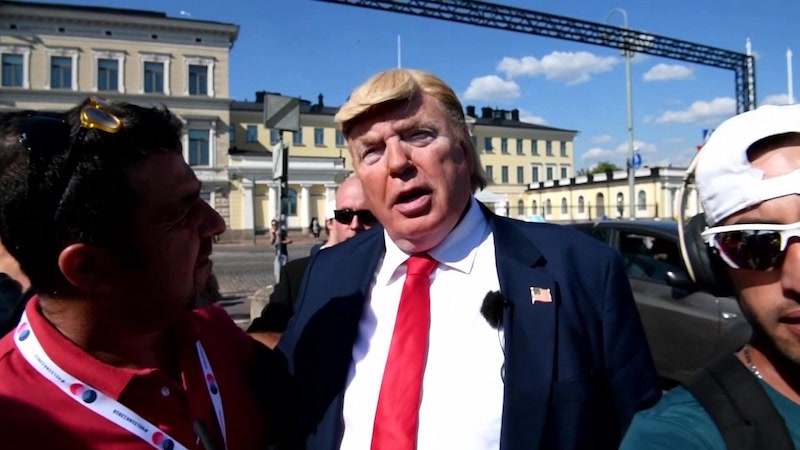 "Don't tell my wife," a trump clone told bystanders back in July 2018.

“Could you imagine if I lose? I’m not going to feel so good. Maybe I’ll have to leave the country, I don’t know.”

“WELL, it actually happened—despite doing everything in my power to finagle my way back to the White House, Sleepy Joe won the election. What were the voters thinking!

Since the U.S. doesn’t want me, I don’t want the U.S. That’s why I’ve picked up my marbles and moved to Finland.

It’s perfect for me.

For one thing, Finland isn’t one of those s**thole countries. It doesn’t have an uppity president like Fancy Pants Macron or a sourpuss like Angela Merkel. I’ve seen photos of the top politicians, and most of them look like “Charlie’s Angels.”

Come to think of it, lots of Finnish women look like “Charlie’s Angels,” and I’m big into blondes. Maybe they’d be turned on by a guy who used to be the most powerful man in the world.

It’s not just politics that hooked me. These folks know how to prevent forest fires. Simple—you rake the leaves. Will California ever learn?

And thank God I won’t be hearing 'COVID, COVID, COVID' any more, since Finland has almost got the virus under control. What’s really great is that people don’t have to wear masks!

Finns speak English, even if they have a funny accent, and their language is so unpronounceable that no one will expect me to say anything. I have already learned how to say golf in Finnish—it’s golf. I’m the greatest linguist!

Here\s the best thing about Finland—it’s next door to Russia. I can pal around with my BFF Vlad, reminiscing about our rendezvous in Helsinki.

When I landed at Helsinki airport, snug as a bug in a rug in my mink coat (they farm minks here), I got a warm greeting from a gang of locals. I learned later that they were the leaders of the True Finn Party. That’s a great name, by the way—maybe I should start the True America Party.

The True Finns are my kind of people—anti-immigration, anti-Muslim, racist, anti-gay, anti-gypsy and anti-EU. They came in second in the last national election—betcha you didn’t know that—and they would do even better if they doled out more misinformation about the ‘deep state.’ I can teach my new buddies a trick or two.

As you know, next to avoiding taxes and firing phony lawsuits, golf is my big thing. I played more than 300 times when I was president, and I bought a couple of golf courses as soon as I got here. I renamed them—adios, Master Golf Club, hello Trump Master Golf Club--because I know that Finns cannot wait to play on a course named after me.

One of these courses has a nice clubhouse, and I might turn it into my mansion. Mar-a-Lago it isn’t, but I can roll out of bed and, after spending an hour combing and dying my hair, hit the links.

These days I’m thinking big. Maybe the Finnish government will give me the President’s summer place. After all, I was a bigger big shot than President Sauli could hope to be.

Here’s another outstanding idea—how about my becoming the king? Finland was originally supposed to have one, but they guy they picked, Prince Frederick Charles of Hesse, never showed up. The job is still open…You never know.

Let me tell you about the food. Here’s the bad news—reindeer is on the menu. Didn’t they ever hear of Bambi?

I was afraid that all I’d have to eat was bear and elk, but these people are much more on the ball. The hamburgers are great, and I can get them well done, just the way I like them.

When I had the True Finn guys over for dinner, I made sure to get my two scoops of ice cream, while everyone else at the table got one. That’s what I did in the White House, and those fellows needed to know from the get-go who’s the boss.

I’ve gotten hooked on salmiac. I don't care that this candy tastes like gasoline or that ammonium chloride, one of its ingredients, raises your blood pressure. Salmiac is banned in almost every EU country, but who gives a damn about those wusses.

Finland has one very big problem—November to March. The temperature is close to freezing and it drizzles a lot. When the sky isn’t black, which is most of the time, it’s gray. One year, the sun shone for only eight minutes during the entire month of December.

That’s not for me.

“Come to Brazil,” my BFF Jair Bolsonaro told me, when I complained. “December is summertime here and you can play all the golf you want.”

'That’s a great idea, Jair,' I said. 'I’ll stay in Trump Hotel Rio or Trump Towers Rio, hit the course for a couple of rounds of golf every day and look for some new get-rich-quick schemes.

Goodbye for now, Finland—see you in the spring. "

David Kirp is a professor of public policy at the University of California-Berkeley and a contributing writer to the Helsinki Times. He is a permanent resident of Finland.