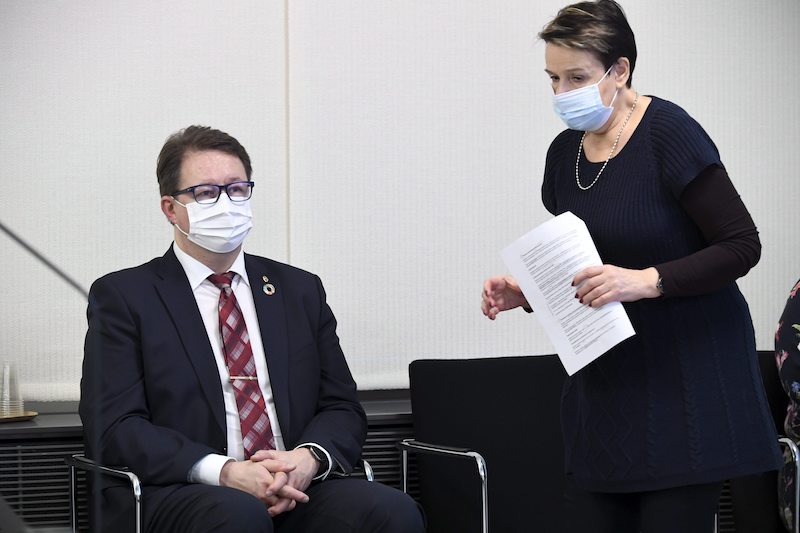 MIKA SALMINEN, the director of health security at the Finnish Institute for Health and Welfare (THL) and Kirsi Varhila, the permanent secretary at the Ministry of Social Affairs and Health had both publicly questioned the usefulness of face masks.

What politician dares to explain the true rationale for Finland’s feckless COVID policy?

“Now is the time to pull up your socks”—this was Prime Minister Sanni Marin’s recent counsel to the nation, as Finland confronts the second, far more deadly, wave of the COVID pandemic. Maybe this phrase loses something in translation, but it hardly conveys a sense of crisis.

Make no mistake—this is a crisis. But the government’s response is about as effective as pulling up your socks.

The figures speak for themselves. In the capital region, the number of new COVID cases nearly doubled during the past two weeks, jumping from 107.7 to 189.7 cases per 100,000 inhabitants. And there’s no end in sight.

Last March, at the outset of the pandemic, the government acted decisively, declaring a state of emergency and shutting down the capital region. These days, the government is sounding tough, padlocking public facilities. But it is behaving like the mouse that roared—there’s little connection between the rhetoric and the safety measures.

Libraries or museums, which are now closed, aren’t places where COVID lurks. And swimming in an uncrowded municipal pool is as safe as walking on a crowded city sidewalk.

Any epidemiologist will tell you that bars and restaurants—places where people spend hours crowded together, shouting to make themselves heard or doing their best Madonna imitations—are ground zero for coronavirus.

Modestly reducing the number of diners and drinkers, the policy du jour, does not solve the problem—check out any trendy restaurant or Roobertinkatu watering hole on a Saturday night—but the government has balked at closing these establishments, as it did in the spring.

Limiting the number of shoppers in big box stores and shopping centers, where social distancing is a bad joke, would also be a smart move. Yet that isn’t on the policy agenda—especially during these shop-till-you-drop weeks before Christmas.

Then there is “mask-gate,” Finland’s self-inflicted public health wound.

The science has been clear from the outset—requiring people to wear masks in crowded spaces reduces the spread of coronavirus. But THL’s Mika Salminen’s U-turns have made it almost impossible to get this message across.

As late as June, Salminen was insisting that there was no science-based reason to wear a mask. Two months later, he begrudgingly acknowledged that while "evidence of masks' effectiveness is not particularly strong, even small additions to our range of available options are justified.”

Now Salminen is urging people to wear masks indoors and in outdoor public spaces. Which version of the facts are people supposed to believe?

Finns follow the rules—but which rules? Small wonder that disinformation about the alleged worthlessness of masks is spreading on the internet.

“When health authorities present one rule after another without clear, science-based substantiation, their advice ends up seeming arbitrary and capricious,” the science journalist Roxanne Khamsi recently wrote in Wired. Why are people being urged not to get together with friends at home, while it is perfectly fine to go to a restaurant?

There is an implicit logic to this seemingly illogical approach—protect the economy by keeping restaurants and bars up and running, even though the number of COVID cases will increase, more people will wind up in ICU’s and more lives will be lost.

Ideally, the government would bail out these business owners and their employees, as happened in the spring. However, there is no money in the till, and so these enterprises have to make money the old-fashioned way, by attracting customers.

As Amanda Mull observes in the current issue of The Atlantic, “America has landed on its current contradiction: Tell people it’s safe to return to bars and restaurants and spend money inside while following some often useless restrictions, but also tell them it’s unsafe to gather in their home, where nothing is for sale.” That, sadly, is precisely what is happening in Finland.

The honest politician would explain the real rationale for the current policy, empowering people to make their own calculations of risk in their daily lives. But no politician who wants to stay in office would dream of uttering those words.

David Kirp is a professor of public policy at the University of California-Berkeley and a contributing writer for the Helsinki Times. He is a permanent resident of Finland.