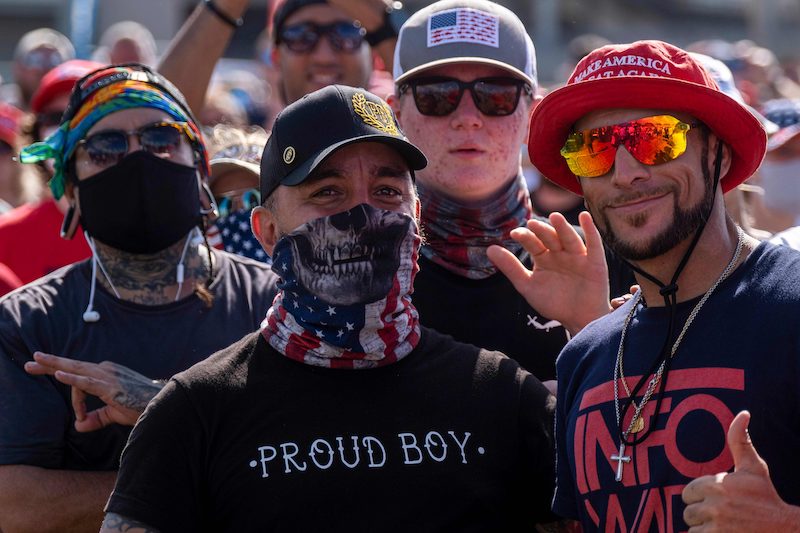 THE “I-can-breathe-again” good news: the protracted agony of counting absentee ballots has ended and, barring a lightning strike, Joe Biden will be the next president of the United States. Donald John Trump’s four-year reign of error—all too often his reign of terror—has ended.

Since the founding of the republic more than 250 years ago, the handover of the presidency has been smooth, but Trump isn’t going gently into that good night. Although his last hurrah—his baseless claim that the election was stolen, his countless lawsuits and his cry for the Supreme Court to come to his rescue—encourages fanatics like the Proud Boys to fight on, the guardrails of democracy will withstand that assault.

Come January 20, Donald Trump may have to be carried bodily from the White House, but he is toast. The next time we see him may be in criminal court.

Here’s the bad news: the election was hairbreadth-close. What does this outcome say about the United States?

Looking in the rearview mirror, Trump’s 2016 election is understandable. While the American economy was growing, the have-lesses—the miners in Pennsylvania and West Virginia, the autoworkers in Michigan, the farmers in Wisconsin—were not part of this equation of prosperity. Neoliberal Democrats were not paying attention.

Tellingly, Hillary Clinton dismissed Trump supporters as the “basket of deplorables.” Enough of them returned the insult to install the man who claimed that “I alone can save the country” in the White House.

This time, there is no excuse—no reason why those who backed him in 2016 haven’t learned that he is a conman and a fraudster who betrayed their trust, a coronavirus denier, a tax dodger and a racist.

Trump got the votes of more working-class, white males than in 2016. Did they slumber through the past four years?

I won’t try to catalogue Trump’s lies, 22, 000 and counting, or detail all of his calamitous decisions. These have come with numbing frequency, with outrage piled on outrage.

A president who claimed to be African-Americans’ “best friend” gave wink-wink, nod-nod backing to the modern-day Ku Klux Klan.

A president who pledged to keep the country safe chose Vladimir Putin, Kim Jong-Un and Jair Bolsonaro as his BFFs, while libeling Third World nations as “s***hole countries” and dissing the leaders of Western European democracies. (Finland is the lone exception—you may remember that Trump lauded the country because it supposedly prevented forest fires by raking the woodland leaves.)

COVID offers the deadliest example of the harm that Donald Trump has wreaked. A just-published study, led by B. Douglas Bernheim, chair of the Stanford University’s Economics Department, estimates that at least 30,000 coronavirus infections and 700 deaths were caused by Trump’s July-through-September campaign rallies, which were jam-packed with true believers who refused to wear masks.

In American law, criminal negligence is “the failure to use reasonable care to avoid consequences that threaten or harm the safety of the public and that are the foreseeable outcome of acting in a particular manner.” I can think of no clearer example of such criminal behavior than the deaths resulting from Trump’s defiance of public health officials’ unanimous view that masks represent the front line of defense against COVID-19.

What were the Trump voters thinking?

The most distressing—and perhaps the most likely—explanation is that they knew exactly what they were doing. “The voters who said in 2016 that they chose Trump because they thought he was ‘just like them’ turned out to be right,” writes Tom Nichols in the Atlantic. “Now, by picking him again, those voters are showing that they are just like him: angry, spoiled, racially resentful, aggrieved, and willing to die rather than ever admit that they were wrong.”

I feel sorry for Joe Biden. He has been running for president since 1988, and maybe since he was first elected to the Senate in 1972 as a thirty-year-old wunderkind. But he never could have anticipated that he would become president in such a crisis-filled moment

In the twilight of his career, Biden has been summoned to control the coronavirus pandemic, kick-start the economy, tackle climate change and strengthen the safety net. He must undo scores of regulations that have laid waste to sensible policies on issues that range from fair housing and public education to environmental protection and energy conservation. He must convince the world that America is once again a trustworthy ally, not a blustering bully.

No American president who took office in peacetime has ever been called upon to accomplish so much. And while most presidents have enjoyed the luxury of a “honeymoon” period, Twitter and Facebook are already overflowing with vitriol, with Trump once more leading the charge.

Joe Biden will be presiding over a nation whose citizens are as bitterly divided as at any time since the Civil War. Nearly half the populace feels robbed, and many of them will refuse to accept him as the legitimate president.

To adapt a line from Winston Churchill, this is neither the end nor the beginning of the end of Trump-ism. At best, it is the end of the beginning. Although the president lost, his worldview is alive and kicking.

Since 2016, the Republican Party has become as much Donald Trump’s property as Mar a Lago. In 2024, a less hotheaded, more on-message candidate who holds the same faux-populist positions as Trump could well win the GOP nomination—and maybe the presidency.

What has happened to the United States? What kind of future can the country anticipate? These questions have kept me awake at night, and the election only worsened my fears.

David Kirp is a professor of public policy at the University of California-Berkeley and a contributing writer at the Helsinki Times. He holds permanent residency status in Finland.