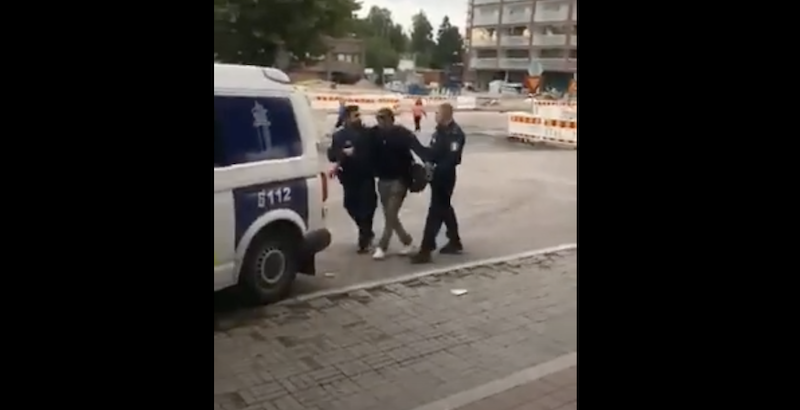 Screenshot of video depicting the arrest of David Gill

Returning home from a basketball tournament in Tampere last August, David Gill and his fifteen-year-old son Max boarded a train. Although they did not realise it, they didn’t have valid tickets, and this innocent mistake turned into a nightmare.

As soon as they boarded the train, they were accosted by railway inspectors, manhandled, kicked off the train and arrested.

Max was handcuffed and tossed in jail. He was released a few hours later, left on the streets of Espoo without his cellphone, not knowing where he was or what had happened to his father.  David was gut-punched by a railway inspector, thrown into a drunk tank for the night, denied a lawyer and deprived of badly needed medication.

David and Max are black. Racism, pure and simple, is the only explanation for their mistreatment.

The story made the news, but by the next day it had vanished. The police said they were looking into what had occurred, but if that “looking into” has led to anything, we haven’t heard about it.

My hunch is that most people treated what happened to David and Max as a one-off—the tale of few bad-apple ticket inspectors and police, not a tip-of-the-iceberg moment. While that is a comforting thought, it is not the case. Such incidents are more common than we would like to think. We just don’t hear about them.

The only reason this episode went public is that David, an American screenwriter who has lived in Finland for the past seven years, was not afraid to speak out. How many immigrants from Africa or the Middle East, fearful of deportation, would have—realistically, could have—done the same?

When you think about which European countries are the most racist, the spotlight shines on France and Germany. Finland does not come to mind, but the evidence is damning.

In a 2017, twenty-eight-country survey of first- and second-generation immigrants and ethnic minorities, the EU Agency for Fundamental Rights found that Finland was second—to Luxembourg—on the list of nations where discrimination was most prevalent. The following year, Finland topped the dishonour roll in an EU study of discrimination against African immigrants.

The popular response was the sound of one hand clapping.

Behind these statistics are the chilling stories of immigrants from Asia and Africa. Last summer, the Helsinki Sanomat broke the news that several cleaning service companies were making a tidy profit by exploiting foreigners who awaited decisions on their residence permit applications.

The Sanomat account detailed how efforts by these workers to call attention to their plight went nowhere. When an immigrant whose job was to clean a school complained about how he was being treated, the principal told him that he “should study Finnish and get a better job.” Officials regarded such protests as a dodge to keep from being deported.

If any repercussions followed from this story, they haven’t made the news.

Far be it from me, a citizen of a country where there were more than a thousand police shootings last year, to lecture anyone about race.

Racism is America’s stain, its original sin. An American Dilemma, a classic study by Swedish sociologist Gunnar Myrdal, concluded that the nation could not reconcile the democratic ideals of the “American Creed” with the realities of racism.

While the tension pinpointed by Myrdal three-quarters of a century ago persists, it is diminishing. Slowly but inexorably, America is owning up to its racism and doing something to address it.

White vigilantes have wreaked havoc since Donald Trump entered the White House. “Step back, get ready,” he egged on the Proud Boys, the present-day incarnation of the Ku Klux Klan. But these outlaws are fighting a rearguard action.

Angela Harrelson (R), aunt of George Floyd, and Paris Stevens (L), cousin of George Floyd, pose for a photo during a celebration of his birthday at a memorial site known as "George Floyd Square" on October 14, 2020 in Minneapolis, Minnesota. Floyd, who was killed at the site by Minneapolis Police on May 25, would have turned 47 years old today. LEHTIKUVA / Getty Images / AFP

The death of George Floyd at the hands of the Minneapolis police last May was hardly the first such outrage. But Floyd’s death ignited a firestorm that has brought the United States to a racial reckoning, and there is no end in sight. As sociology professor Michael Eric Dyson told the Washington Post, “It is striking that we have seen yet another uprising, rebellion, resurgence and revival of a spirit of resistance that has barely been seen in this country since the civil unrest in the 1960s. People keep asking me, ‘What’s different now?’ What’s different now is different now.”

If a modern-day Gunnar Myrdal were to conduct a similar study of racism here, he might well title it The Finnish Dilemma. Although the facts are entirely different—for one thing, Finland has no original sin to expiate—there is a similar gap between belief and behavior.

In a 2011 survey, two-thirds of the population acknowledged that Finland is a racist nation. But I’m not racist, they tell the pollsters. Somebody else is doing the discriminating.

There is no reason to believe that meaningful change will occur as long as this attitude persists—as long as the overwhelming majority of people think of themselves, not as bystanders but as part of the problem; as long as they do not recognize that their behavior carries racial and ethnic consequences.

After the incident on the train from Tampere, David Gill realized he was naïve in believing he had left racism behind when he came to Finland. “Racism is systemic and ingrained in Finnish society. Guys like me and Max will always be treated with hostility.”

“This has completely changed my perception of living in Finland,” said Max.  “Of course, I have experienced smaller racist incidents almost every day, but this is something else.”

Why should Max take this daily dose of racism for granted—why should anyone, for that matter?

David Kirp is a professor of public policy at the University of California at Berkeley and a regular contributor to the Helsinki Times.