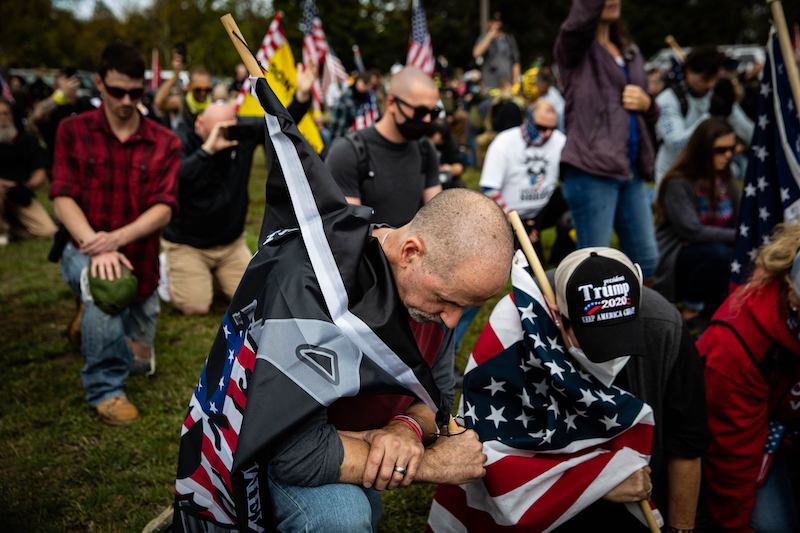 People take a knee as an organizer reads a prayer to the crowd of several hundred gathered during a Proud Boys rally in support of Trump at Delta Park in Portland, Oregon on September 26, 2020. LEHTIKUVA / AFP

A right-of-center coalition takes office, safety net programs are slimmed, the belt tightened for schools and universities, taxes raised and the deficit wiped out. A left-of-center coalition wins the next election, budget cuts are undone, new initiatives introduced and a modest deficit results.

Whether center-left or center-right, the winning coalition adopts an agenda that ever so gently rocks the boat.

Across the ideological spectrum, politicians endorse the the social safety net that guarantees everyone a decent life, with free health care, free education, affordable housing, unemployment insurance and the like—everything that makes Finland the world’s happiest nation.

Here, democracy is built on bedrock.

Of course, no nation is flawless. If you are Somali or Syrian looking for a job, research shows that you will have a much harder time than native Finns, and this discrimination against newcomers extends well beyond the job market. If you are an immigrant, even if you have been here for years, you may run the risk of deportation.

These are huge issues, but they don’t threaten the legitimacy of the government. Solutions are within reach if the political will is there.

American politics is anything but boring. While this liveliness is usually a good thing, these are far from normal times.

Since the 1776 American Revolution, the U.S. has prided itself on its unique amalgam—liberty, equality before the law, individual responsibility, republicanism, representative democracy and laissez-faire economics—sometimes labeled as “American exceptionalism.”

America’s noisy political disputes have historically been reined in by the checks and balances embedded in the Constitution—a populist House of Representatives and a deliberative Senate; a Supreme Court committed to upholding the Constitution, whatever the political fallout; and a President who leads within the contours of the law.

These guardrails were designed to maintain a flourishing democracy.

But now America is a failing—if not a failed—state. In the company of democracies, the country has become a pariah. The guardrails of democracy are weaker than at any time since the Civil War.

Credit Donald John Trump. He’s a serial liar, a chiseler, a tax evader, a sexual predator, a fear-mongerer, an influence-peddler, a know-nothing who dismisses science, a draft-dodger who insults military heroes and a cheerleader for the acts of violence committed in his name. He has never encountered a minority he didn’t ridicule, an environment too pristine to endanger, a democracy he didn’t denigrate or a dictator he didn’t kowtow to.

His gross mismanagement of the pandemic has led to tens of thousands of needless deaths.

In a healthy democracy, such a president would be held accountable for these derelictions of duty, but Trump has emerged unscathed.

If Barack Obama ever committed anything like a garden-variety, once-a-week Trumpian sin, you can bet Republican lawmakers would have cried “impeach!” But there wasn’t a single scandal worthy of the name during the eight years of his presidency.

When Bill Clinton, the last president to be impeached, was tried for his sexual peccadillos—offensive behavior, but hardly threatening to democracy—senators from both parties crossed the partisan divide.

Lest we forget, Donald Trump was impeached for courting foreign interference in the 2016 presidential election. It doesn’t get much worse than that, but the Republican-controlled Senate behaved as if he were the Pied Piper of Hamlin.

Now Trump has upped the constitutional ante by refusing to acknowledge that he will accept the outcome if Joe Biden wins the election—either he is reelected, he says, or the result is illegitimate.

In the first presidential debate, Trump instructed the Proud Boys, a white supremacist gang, to “stand by and deliver.” That’s no wink-and-nod incitement—it’s a green light.

It will be bedlam if the election night tally shows Trump losing, or acquiring a lead that evaporates as mail-in ballots are counted. You can count on far right, gun-toting militias taking to the streets.

The stakes could not be higher than this. It represents an existential threat to democracy.

This is the road to Belarus.

I shudder to contemplate the horror show plotline of a second Trump term. Every time this president does something godawful, I wonder whether he can do something worse. Lightning-fast the answer comes back—“yes he can.”

It is a cliché to talk about watershed elections, but that is the only way to describe this moment. If, by hook or crook, Trump hangs on to the White House, I do not see how the country can recover—how the guardrails of democracy can be rebuilt—during my lifetime, and I mean to stay alive for a good long time.

David Kirp is a professor of public policy at the University of California-Berkeley and a frequent contributor to the Helsinki Times. He has permanent residency status in Finland.