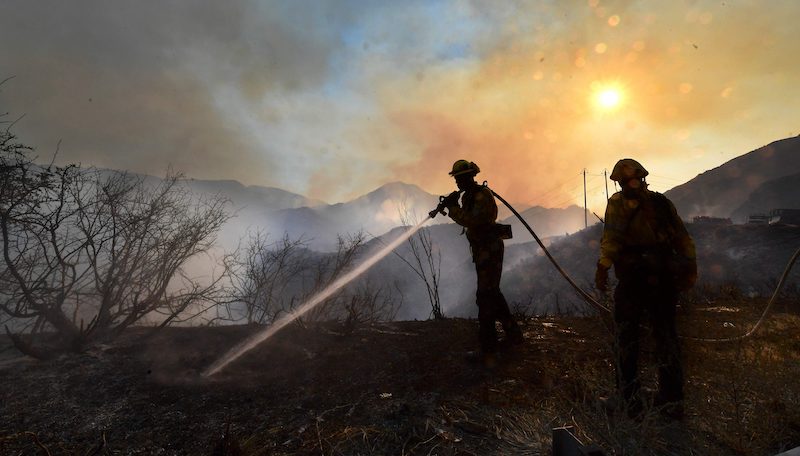 Firefighters work the Bobcat Fire in the Angeles National Forest on September 23, 2020 in Los Angeles, California. - Containment has grown to 38 percent as one of the biggest fires in the history of Los Angeles County grows to over 113,000 acres. LEHTIKUVA / AFP

“It’s too much,” my friend Beth told me, when we talked not long ago. “First corona and now the fires. Many of us were barely holding on before. We don’t know how to deal with this as well.”

Beth lives in Northern California, where I have spent much of my adult life. Niko, my Finnish husband, and I, the trailing spouse, have been in Helsinki since early April. This separation from America is working a profound change in how I understand my native country, on how I see life in California.

In Finland, COVID-19 has been largely contained since May. The people trust their government politicians and believe in science. No one I know here can believe that Americans would turn wearing a mask into a political litmus test. The social safety net is tightly woven: Finns aren’t homeless on the streets; they aren’t shooting one another on the barricades.

Meanwhile, in the United States, more than 200,000 people have died of COVID-19, tragically and to a great degree needlessly. Three times a day on average, a civilian is killed by a police officer. The narcissist in the White House is hell-bent on destroying democracy. And some of the biggest fires in California’s history have devoured an area the size of Connecticut, with no end in sight.

The more I weigh the differences between here and home, the more I find myself inching toward a status I never dreamed of: expat.

I count Beth, a friend for 20 years, as one of the most feet-on-the-ground, not easily fazed people in my life. In March, when California instituted its COVID-19 lockdown, she and Ken, her husband, decamped from San Francisco to a second home near Point Reyes National Seashore. They peck at their laptops on weekdays, venturing out only for evening walks in the hills and a weekly run to the grocery store.

They know how fortunate they are, how privileged. Still, anyone would chafe after spending so many months in even such benign lockdown. “We haven’t seen our kids since March,” Beth lamented. “We’ve had a few socially distanced, bring-your-own-food dinners with friends, but otherwise we’ve been isolated.”

And then came the fires. “Helicopters overhead — it’s like a war zone,” Beth said when the fires were at their most dangerous. The Woodward conflagration, finally contained after three weeks, scorched nearly 5,000 acres and though it came within half a mile of their home, Beth and Ken were lucky on that count too. They didn’t even have to join the hundreds of thousands of West Coast evacuees. But what about the next fire season or the one after that? What about October?

But for Niko and me, it’s been almost-back-to-normal since June. Early in the pandemic, the Finnish government invested in thorough contact tracing, and local authorities track the spread of the disease by testing groundwater — sewage — as well. Finland recently released an app that lets us know if we have encountered someone who tested positive, and it says something about my adopted country that 20% of the population signed up on the first day. Online data show the seven-day average of new cases per million in Finland at about 14; in the U.S., it’s about 130.

We eat out (on terraces), get haircuts, visit museums. We worry about a second wave. But what this country did once to flatten the curve, it will doubtlessly do again if the number of new cases rises markedly.

I devour U.S. news, but now I start the day reading the English-language Helsinki Times paper, for which I have started to write. I Zoom with friends at home, and listen to U.S. political podcasts, but the United States seems very far away, as if I were looking at it through the wrong end of a telescope. Niko and I had planned to return to San Francisco this month, but as the saying goes, “Man plans and God laughs.” Who would choose to go back now?

When I speak with my friends, I remind them that, although they are barred from Finland until the U.S. has the pandemic under control, they could go to the U.K. or Ireland. After quarantining for two weeks, they would live a safer, saner life there. But none of them are budging. It’s as if they have become inured to a dangerous new reality.

“There’s a bedroom in our apartment with your name on the door,” I tell them. Perhaps a year from now — when these fires at least will have receded, a vaccine is available and, fingers tightly crossed, there’s a decent man in the White House — they can take us up on our offer.

Meanwhile, I try hard to imagine myself in their shoes, in San Francisco or Point Reyes, and sometimes — only sometimes — I succeed.

David Kirp is an emeritus professor of public policy at UC Berkeley; he has permanent resident status in Finland. He is a regular contributor to The Helsinki Times

This Op-Ed was first published in the Los Angeles Times.