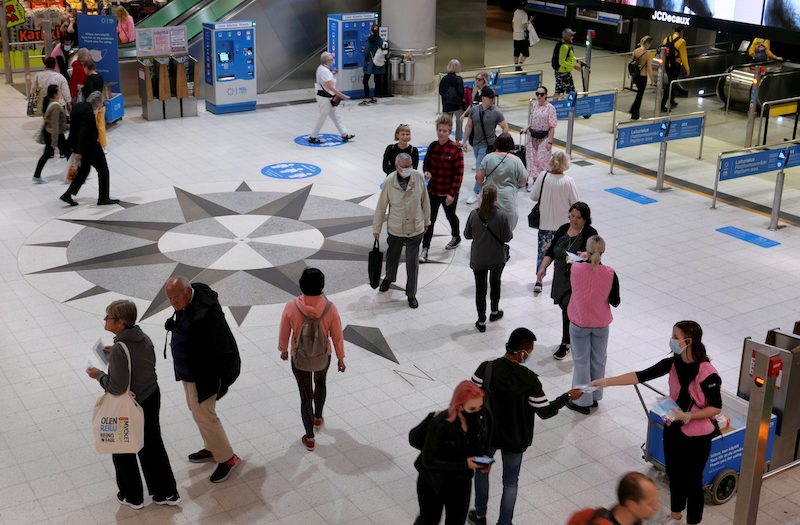 Last weekend, I went to Forum to buy headphones. The mall was crowded—the very situation in which officialdom has tepidly suggested that people wear masks—and I counted the number of people who were wearing them. Out of fifty shoppers, there were precisely three.

I have started to keep a tally on my tram trips as well. When I’m in a car with twenty passengers, perhaps five will be wearing a mask.

Although these numbers are better than a couple of weeks ago, they’re not nearly big enough. For masks to be effective, everyone must wear them, but as things stand, mask-wearers are protecting others, while most people aren’t reciprocating.

While I am a permanent resident, I am still a newbie, and so I turned to Finnish friends for an explanation. They tell me that embarrassment is a likely reason. Shades of the anthropologists’ venerable distinction between the shame, do’s-and-don’ts cultures in Northern Europe and the Mediterranean guilt cultures.

If you buy this reasoning, shame-culture Finns are concerned with emulating what other people are doing. They don’t want to appear ridiculous—if most people aren’t wearing a mask, the logic goes, I’m unwilling to look different.

But masks aren’t a follow-the-leader accessory. They are a lifesaver.

Passengers can now pick up free masks at several metro stations. While that’s a positive step, it is being undercut by the accompanying message—whatever you do, don’t embarrass passengers who aren’t wearing masks. Why not? Does avoiding confrontation matter more than improving public health?

When I ask these friends whether Finns would wear masks if the government made the practice compulsory, rather than “recommending” it, everyone says yes. The evidence backs them up—almost everyone here trusts the government to do the right thing. That’s why the COVID tracking app was downloaded more than a million times in a single day. The citizenry believes it will make a difference because that’s why public health officials say.

Finland is a civic-minded nation. People here cannot understand why, in the United States, wearing a mask has become a political statement and millions of Americans dismiss public health officials’ evidence-based advice as a plot against Donald Trump.

This civic-mindedness is one reason why I am such a Finland booster. If the government announces that you have to wear a mask in crowded spaces and on public transportation, where the threat of being exposed to COVID is real, the situation will change overnight.

Memo to Prime Minister Marin—for the sake of the nation, please take this step.

According to news reports, the government plans to require that passengers bound for Finland have a negative COVID test result before boarding a plane. This is a smart move, since many of the recent cases have come via travel from abroad. But it isn’t enough.

THL keeps assuring us that it has the situation well in hand, that “nationally, the number of new infections remains relatively low.” While that is true, it’s only part of the story. As the European Center for Disease Control reports, the situation here has grown noticeably worse since mid-July, when people started returning from their holidays.

You don’t need a soothsayer to predict that, with chill in the air and people congregating indoors, those numbers will keep growing.

Take a look at the “confirmed cases” graphic that’s the lead item in this newspaper every day, and you’ll see that the caseload is spiking in European countries that mistakenly believed the threat was behind them and ceased to be vigilant. Let’s make sure that the same thing doesn’t happen here.

David Kirp, a regular contributor to the Helsinki Times, is a public policy professor at the University of California-Berkeley.