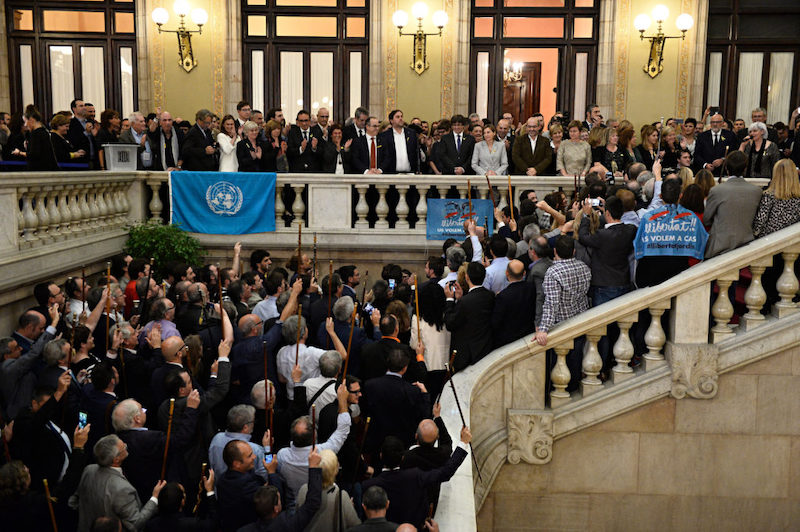 The Declaration of Independence of Catalonia on 27 October 2017.

On 27 October 2017, after a decade of mass demonstrations, Catalonia organised a referendum on self-determination without the consent of the Spanish state. It did so in spite of everything because Spain refused to debate and wanted to impose its will. A total of 2.3 million people took part, with 90% in favour of independence. With the referendum, the Catalan government wanted to push Spain to negotiate, but the state continued to refuse dialogue, sent 10,000 police to repress the vote, and Europe did nothing to demand that the conflict be dealt with democratically.

Faced with this reaction from Spain, the Catalan government of Carles Puigdemont found no alternative but to proclaim Catalonia's independence, which was what the people had voted for. The declaration of independence was unanimously approved by the Catalan Parliament and is now historically proclaimed. More than 70 countries pronounced themselves on the matter, mostly against it, as is normal in this type of case so as not to contradict the existing state, until independence is confirmed by the facts and the international recognition of the new state is made official.

At that time, the Catalan government did not want to ask citizens to defend independence in the streets, as they were certain that the Spanish state would react violently to a people who resisted massively and peacefully. That is why President Puigdemont, faced with his imminent arrest, went into exile in Belgium. He has been elected to the European Parliament, where he defends Catalonia's right to independence, and is battling in EU courts.

Five years later, the resolutions of the European judiciary are about to come out, so the Council of Europe has published, on 25 October, a new resolution drafted by its Secretary General, Marija Pejčinović, which follows on from the Council of Europe's Cilevics Report that criticised Spain's reaction against the Catalan independence movement. It also follows up on the report of the UN Working Group on Arbitrary Detention which found Spain's repression totally unacceptable. The new Council of Europe report argues that it is lawful to pursue the independence of a European territory as long as it is done without using or inciting violence. This completely disavows the Spanish justice system that is persecuting the peaceful Catalan independence movement as if it were terrorism.

Five years ago we already showed that we were committed to a negotiated solution. The next time we are at the same point, and it won't be long, we will not stop to look for negotiated solutions and we will go ahead with the non-violent struggle, Gandhi style, to control the territory with crowds that will disobey and overwhelm the Spanish state. If Spain uses the police and the army against a peaceful population, Europe will have to take that responsibility on its conscience.