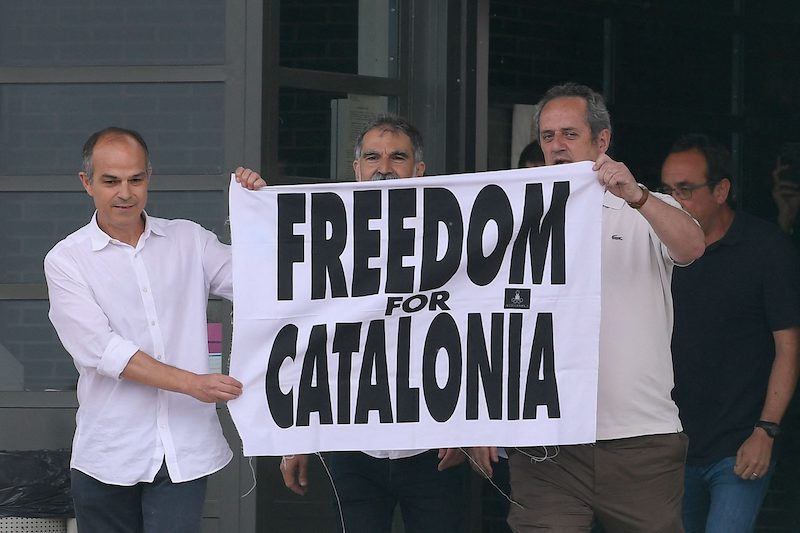 The Spanish government has granted a pardon to the 9 Catalan political prisoners and it pains me that internationally they attribute good intentions to this farce. The pardons have been given in a forced manner, because of the recent Council of Europe report, which equates Spain with Turkey, and because of the imminent, presumably condemnatory judgement of the EU Court of Human Rights. But these are Spanish-style pardons: "reversible pardons".

They are not pardons but conditional release and, if at some point they consider that they are not behaving 'correctly', they will put them back in prison. Furthermore, in Catalonia, there are 3,300 pro-independence supporters with open criminal proceedings for holding peaceful demonstrations.

For them there will be no pardons, but fines and imprisonment. Like the recent 5-year prison sentence for the young Marcel Vivet. Convicted without evidence, only on the accusation of a policeman (who, moreover, we have now discovered that he had blamed another demonstrator for the same action!) And there will be no pardon for the exiles (in Belgium and Switzerland), who will still not be able to return home because the Spanish police will arrest them against the criteria of the Council of Europe and against the immunity they enjoy as members of the European Parliament.

But not only that, the Court of Auditors is also involved in the operation against independence. It is a court that audits the accounts of public administrations (although it has not prosecuted the corruption of Spanish governments). It is linked to Franco's dictatorship, made up of non-judges appointed mostly by the Spanish right wing, not very transparent and outside any democratic control.

The Court of Auditors accuses the Catalan government of having incurred undue expenses and holds 41 people allegedly responsible who, although not yet sentenced as guilty, will have to pay bail per person of M€ 3.8M, M€ 3.3M, M€ 2.95, M€ 2.2M,.... or have their salaries, bank accounts and family assets seized. These amounts now demanded by the Court of Auditors are in addition to the M€ 5.2 and M€ 4.1 previously demanded and paid.

The State is prevaricating in order to ruin them and try to scare the independence movement. Is this the forgiveness and concord offered by the Spanish State? We will not be satisfied with 9 "reversible" pardons while the repression continues.

However, we do know that, neither this farce nor your repression you will manage to make us more Spanish. On the contrary, you have made us pro-independence: too many grievances, too much violence.

We are and will be Catalans, inhabitants of a nation with over a thousand years of history. We have survived centuries of Spanish oppression and deserve to be free. If a region of Spain, not the richest, but the most enterprising and hard-working, is economically sustaining the state, what you should do is respect and care for this region.

The will for independence is growing and will continue to grow in Catalonia, and it will not be because of the serious economic plundering it suffers, but because of mistreatment, lies and ferocious repression that never ends. Freedom for Catalonia!