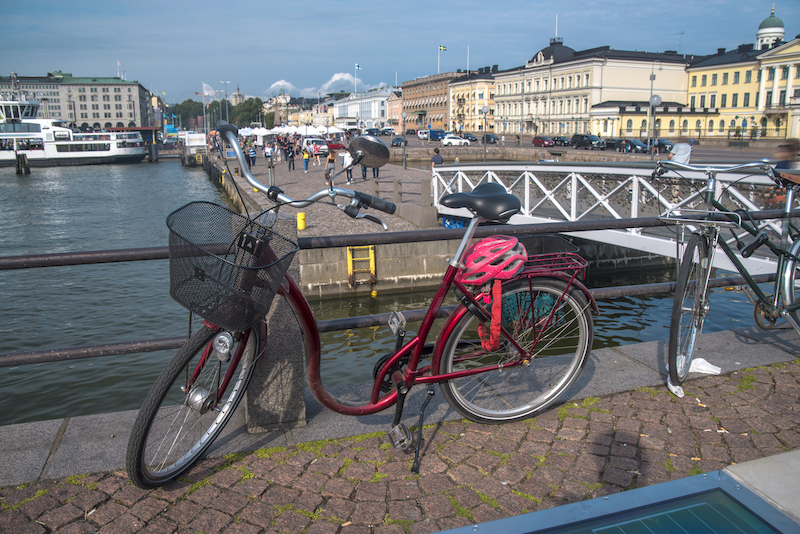 I was meandering along the rocky outcropping above the Temppeliaukio Church when I came across a woman walking her cat on a leash. Felines are notoriously unruly creatures, and when I asked about her training regimen, she figured out that I was a fellow cat lover, and launched into a long explanation.

A barista at Story, a Market Hall restaurant that I frequent (it has the best breakfast deal in the city), has an arm’s-worth of intricate tattoos. I inquired about what they represented, and she responded with a richly detailed description.

“Where do you come from?” a middle-aged man asked, as he steered me to the nearby post office. “San Francisco,” I replied, and he waxed nostalgic about the week he spent there.

There is a point to these vignettes. Finns are usually characterized as introverts—you know the old joke: a Finnish extrovert looks at your shoes during a conversation—and like most stereotypes, this one contains a kernel of truth. Maybe my easy exchanges have to do with my being a generally outgoing American. Perhaps it’s because, unlike many Helsinkians, I don’t instinctively turn away when I pass someone on the sidewalk. It could be that Helsinki itself is the explanation, since I have been told that social distancing is a way of life on the West Coast.

Whatever the reason, moments like these partly explain my love affair with the city. (There is more to it: I relish the small pleasures, like spending a few minutes at the Chapel of Silence in Kamppi Square or having breakfast at Café Regatta, where a seagull once swooped down to snatch my cinnamon bun. The raspberries that appear in August are, in my book, the best argument for the existence of a god. All this is fodder for another column.)

Readers of this newspaper who have seen my previous pieces know that I am on a tear about the threat posed by coronavirus. I have zoomed in on the fact that, even as the number of confirmed cases creeps up, the pallid official recommendation to wear a mask in crowded places has yet to make much of a dent in people’s behavior. As a friend put it: “Here is a Nordic voice: ‘Masks on the tram, really. Masks are for other countries, countries with problems like the U.S. or Italy. What can possibly go wrong here?" This louche attitude is why I hope that the government will deliver an unequivocal message.

Still, COVID-19 does not represent my entire experience—not by a long shot.

Despite the fact that Americans are said to form instant friendships—meet the person sitting next to you on an airplane and instantly become BFFs—I think it’s easier to meet people here than in San Francisco. Unlike Paris, where snobbism is almost a way of life, or Stockholm, where Finns are treated like country bumpkins, this city is not big on hierarchy.

“You should meet so-and-so,” a new acquaintance tells me. She introduces us via email, and I invariably get a response. When I meet her friend, he connects me with someone else, and the daisy chain grows longer. After spending the two previous summers here, this year my husband Niko and I came in early April, and by June my dance card was filling up.

Lest I sound like Pangloss—“everything is for the best in this best of all possible worlds”—random occurrences leave me cold.

It seems chintzy, for instance, to divide the tab for a meal down to the last fifty cents. I pity the poor waiter who must keep track of who consumed what.

The maniacs on electric skateboards who dart among pedestrians pose a menace. I don’t get teary-eyed when I hear about how regularly they break their bones.

And when I wear a mask some people move away, as if I had coronavirus.

Still, these are quibbles. I consider myself lucky that my husband is a Helsinkian, because this city is the most livable place I know. But—and it’s a big “but”—here comes winter.

Last year was my first December in Helsinki. I fared badly when sunlight was as rare as a four-leaf clover. Hoping to emerge from my malaise, I tried a SAD (seasonal affective disorder) lamp, but it did nothing for me. Snow would be a godsend, but global warming has left us with wet and windy days.

I know that I’ll be counting the days until spring.

David Kirp, a public policy professor at the University of California-Berkeley and a frequent contributor to the Helsinki Times, is a permanent resident.