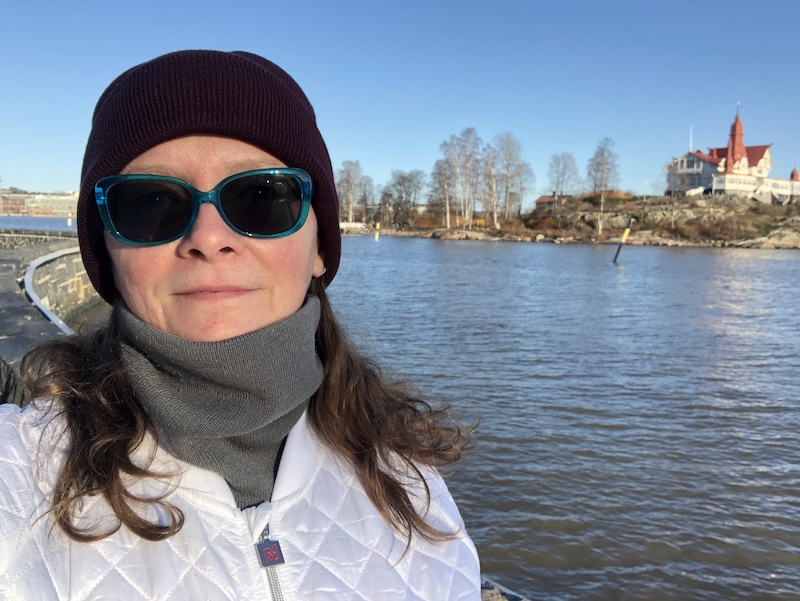 I am in Finland for the year working as a researcher at the Helsinki Collegium for Advanced Studies at the University of Helsinki. Last summer, back home in Canada, I downloaded an app so I could learn some basic Finnish phrases. It must have been a strange sight for my neighbors to see me gardening with my headphones on while pronouncing Finnish words and phrases out loud—especially since the language sounds so foreign.

Finnish is renowned for its difficulty and many folks would not even try to learn unless they were moving here permanently (which I wish I could do—Rakastan Helsinkiä!). I was dutifully learning a bit more every day until I arrived here in mid-August. This was when I found out that Finns may be reserved and shy but they are also way too nice! I am taking a Finnish course for beginners but people will switch to English at the first sign of puzzlement on my part. Even when I indicate that I am trying to learn the language by listening and speaking to others. The Finns either want to save me the effort or embarrassment, or want to save themselves from having to suffer through my extremely poor attempts at speaking.

Now, I truly admire the Finns’ capacity to express themselves almost perfectly in English. I admire anyone that is open to bilingualism or even plurilingualism. I grew up in Montreal, Québec, at the peak of separatism and at the time when the Charter of the French Language, Bill 101, was implemented. French was declared the official language of the province and measures were put in place to guarantee its preeminence in Quebec society. However, I was also a French-speaking little girl living in the Italian neighborhood of Saint Léonard, and I would hear a mix of Italian, English, and French on a daily basis. Given the increasing number of folks of Haitian origins, I would also occasionally hear some Creole. Our landlords, who were practicing Catholics, were dismayed that my parents did not look after my religious education, so they took me to Italian mass. Every weekend when visiting the public library, I would also borrow books in Italian. My father was interested in the history of Germany and I would listen in awe to his language LPs teaching German. So, one can say that from a young age I had an interest, and perhaps even some talent, for foreign languages. When the time came to choose a university, I deliberately enrolled in an English-speaking university so I could become proficient in the language. That earned me the title of a traitor among my people because I was studying in English when my discipline was also offered at all the French-speaking universities! Folks think of Canada and Quebec as bilingual, but they are not. Most Canadians are unilingual. While Canada is bilingual on paper, the only province that is officially bilingual is New Brunswick. The existence of two separate sides is all too real and the two groups often show hostility toward each other. This is especially true in Quebec where there is a high level of anxiety regarding the protection and future of francophone culture and language. That is very unfortunate.

My previous experience of a long stay abroad was when I was studying for my Ph.D. in Salzburg, Austria. Before going, I took every German course I could and this included a very thorough year-long “Reading German” course that focused on grammar. I certainly had a good command of the language by the time I arrived there. However, being able to read Nietzsche and attend a lecture in German is very different from having an everyday conversation. Also, the Austrians were not so nice. They would let me fumble through a sentence without batting an eye and they would make me suffer through the effort of finding the right words to communicate. They offered no help except in German. I had this experience at school, in stores, in restaurants, and with friends. In fact, it was only in the last week of my two and a half years stay that I found out that a friend spoke perfect French. I was stunned when we were out on the street and someone started talking with her in French. She had never switched to French to help me. That was not nice at all, but it did force me to learn.

Finns are at the other end of the spectrum on this matter. Finns are too nice! However, in wanting to help me communicate they actually make it harder for me to learn the language. In fact, there are very few incentives to learn when everyone automatically switches to English to help you out. I feel terrible when I am in a group of Finnish speakers and everyone uses English for my sake. This would be a frowned-upon situation in Canada and in many other places. But here in Finland, it is the norm. It also makes me think that Finns must have a great deal of confidence in the strength of their culture, language, and future if they are such fervent bilinguals. Their openness to other languages also surprises me after learning more about Finland’s history with Sweden and Russia. Having declared its independence only a little over a century ago, one would expect that Finland's national sentiment would be expressed through a more unilingual approach. But Finns are not only too nice, they are also smart: being open to the world is a key to success for Finland and if this means using a lingua franca—usually English these days—then so be it. Meanwhile, please let me fumble in Finnish…Don’t be so nice!

Christine Daigle is a Professor of Philosophy at Brock University (Canada) and currently working as Research Director at the Helsinki Collegium for Advanced Studies at the University of Helsinki.

This is an Expat View Column. If you want to share your story and experiences with other ex-pats in Finland please send us an email to This email address is being protected from spambots. You need JavaScript enabled to view it.