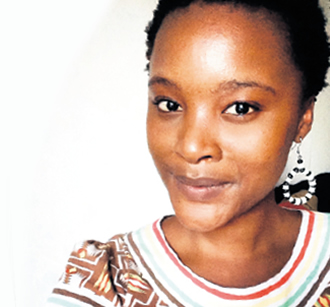 My name is Siyanda (but if we've met already I may have given you my first name, which is virtually impossible for non-Tswana people to pronounce due to the click in the middle of it) and I am a young African writer living in Helsinki. I write mainly humorous non-fiction but my day job is studying for a degree in pure mathematics in Botswana. I am here on holiday!

To begin with I didn't know very much about Finland until I met some Finnish students at my university a few months ago. All I'd read about the country in popular (American) culture, was that Finnish people don't like standing close to each other or engaging in small talk. So, I definitely didn't expect the real fun and openness I experienced in the Finnish friend I made in my native Botswana.

Also, oddly enough, I didn't expect to see so many white people in one place! I mean, of course, I watched TV and read books, so I knew there actually existed places where Europeans were manufactured and stored: Europe.

But still, I'd spent the last 21 years in a country that has about five white people in it (Botswana's extremely hot, and so Britain was only half-interested in colonising it), so I was a bit overwhelmed by the complete change in demographic here.

So I was a little scared I wouldn't fit in, and that I would have trouble making new friends, especially with the language being a barrier. But that was not the case. I really enjoy the company of Finnish people of all ages.

Oddly enough, I can now understand why my friend thought Botswana was kind of similar to Finland. The homogeneity of population (almost everyone in Botswana speaks one language, Setswana), the small population (Botswana has two million inhabitants), the welfare system (Botswana, like Finland, offers free education for citizens and gives allowances to students), are some of the many things the two very different nations share in common.

I also, for some reason, have enjoyed the strange personality of Finnish people. It's nice to see the things that attracted me to my friend are distinctive features of many Finnish people: the modesty, the deep thoughtfulness, the open-mindedness, the interesting mixture of deep liberalism and slight conservatism, the bluntness, the cool-headed approach to life, the strange ability to produce some really soulful music (I saw Tuomo at Flow and was mind-blown), the quiet dignity and of course, the pleasant appearance.

As a 21-year-old girl, I think I'm allowed to dedicate a few sentences to gushing over how cute Finnish guys (and girls) are. But maybe I shouldn't.

In any case, I'm happy to be spending some of my gap-year here, before going home to graduate from university. I am learning a lot about life and adulthood here and I'm so glad that your department of Schengen visas gave me the opportunity to experience for the first time in my life what people call "winter."

Also, I've really enjoyed learning the language, which I find to be systematic and therefore logically followable. This is a refreshing break from learning languages that are too erratic and difficult to follow.

I've only been here for less than two months but I've done so much and had so many great experiences and can't wait to go home and tell everybody that I survived a real winter.