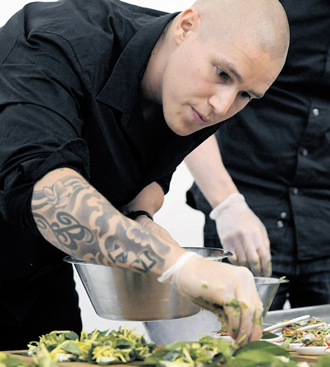 Tattoos. Some people love ’em, some people hate ’em. Personally, I’m rather ambivalent about scoring ink into my skin, but I can kind of understand the point. The best tattoos, I reckon, tend to be the ones that you can’t see – they’re the private ones with meanings too deep to be shared with the public. Tony Halme’s infamous ‘exit only’ ink stain, for example. Nothing, on the other hand, is quite as pretentious as covering all your limbs with archaic Chinese characters (‘egg fried rice’) or extravagant drawings of dragons relating to momentous occasions in one’s life (viz. “I got this one when I graduated, this one when I got laid for the first time, oh and this one after my first alcohol poisoning. That’s my favourite.”)

Anyway, tattoos are on my mind because these days everyone seems to have got them. I remember when if you had a tattoo you were considered either a nutter or a punk rocker, or both, probably. Right now they’re about as mainstream as you can get, and they’re all over our telly screens. There used to be a show called L.A. Ink about a bunch of cod-philosophising tattoo artists on the American West coast. It was full of people getting tattoos and talking about deep and meaningful stuff, and was thankfully canned earlier this year after it turned out that it was all made up.

Also, it used to be on Jim, who seems to be making up for its demise by employing some of the most tat-heavy members of Finnish society as presenters. Two examples immediately present themselves. Firstly, we have erstwhile Finnish Masterchef judge Tomi Björck in the imaginatively-titled Tomin keittiö. In his kitchen he cooks food for assorted guests on a weekly basis. Tattoos festoon his arms, and he seems like a decent chap; in fact he’s so decent I can’t really find anything mean to say about him. Good cook, nice bloke, what’s not to like?

But the plain fact is that we have more than enough cooking shows on our screens. This show is basically an exact copy of Chuck’s Day Off, also – surprise, surprise – shown on Jim, where an equally friendly and heavily-tattooed New York Chef cooks food in his kitchen for, er, assorted guests. Sound familiar? It should. Björck even has the same cooking mannerisms as Chuck from NYC. It’s quite uncanny.

The other show featuring unappealing skin décor is Homma haltuun. Presented by ex-X Factor judge, Renne Korppila (tattooed), and ex-radio DJ Anssi Honkanen, willing participants go for dinner at an Amarillo joint in Helsinki which has absolutely the worst décor the world has ever known. The footage is grainy, the food looks disgusting and the whole thing seems to be stuck in a 1970s time warp of eye-bleeding upholstery. The participant is out for dinner with someone and has to do or say what Korppila and Honkanen tell them to via hidden microphones. The instructions are invariably childishly embarrassing, not to mention unfunny, although the show seems to think of itself has hilariously cutting-edge, which it isn’t.

In short, if you’re unemployed and have more than 20 per cent of your body covered in tattoos, you too could be a presenter on a poor-quality Jim show.