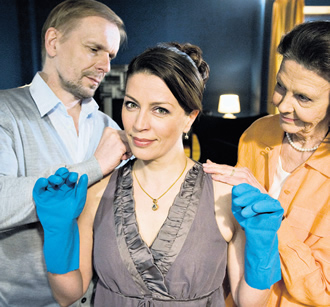 TV-watching Finns are in shock. The tabloids are in uproar. The longest-running telly show in Finland is about to be axed. Well, I say ‘about to be’ when in fact December 8th 2012 is when the final episode of Kotikatu will be aired on Yle1; and I say ‘axed’ whereas ‘put down’ might be more appropriate. The reason for the early warning, according to Yle, is that since Kotikatu is such a beloved national institution the great unwashed need more than a year to get their heads around the show’s not-so-imminent demise.

I imagine the other, unsaid, reason is that they want to maximise the next 14 months viewing figures. In my humble opinion that’s the wrong way to end a long running show. They should air the final episode and then, with no advance warning, cheerily announce, “That’s all, folks. Thanks for watching. Buy the DVD. Peace out!” Follow that up with a one-minute long broadcast of loud static and you’ll have the water cooler gossip at DEFCON one for months. Sadly, that’s not how the world works, is it? Plus it’s a good story for the gutter press to indignate over on quiet days.

Since you’re reading an English-language newspaper I don’t know how much Finnish you understand. If it’s not very much then you won’t get a lot out of Kotikatu. For some reason the English-speaking Finnish-soap-opera loving demographic isn’t strong enough to justify subtitles. Even if you do understand the language you still won’t get a lot out of it simply because it’s as mind-numbingly boring as, well, life in a suburban Finnish street. If you’ve ever seen any soap opera in any country anywhere in the world you’ll know exactly what to expect, just with extra Finnishness (by which I mean bad acting and outrageous production values). Families have dramas, children are occasionally produced, the odd heroin addict dies in a grimy bedsit…oh wait that was Eastenders. But you get the picture.

Either way this is not a show that will be missed, and it’s not only me who thinks so. For several years forums dedicated to the show have been full of disgruntled viewers complaining of a lack of plot credibility and clownish characters. A couple of years ago there was even a petition by fans demanding certain changes. Imagine that! A petition! In this country that’s practically seditious. The world’s gone mad.

In other depressing news, Harry Enfield and Paul Whitehouse’s comedy series Harry & Paul starts in a few weeks on Sub TV. I’m not so happy about this simply because the series isn’t as good as their old stuff. Harry Enfield and Chums is simply a classic of television comedy. Angry Frank, Kevin the teenager, Tim Nice but Dim – there are so many memorable and hilarious characters. The new series feels rushed and desperate in comparison, but it’s still more memorable than Finnish suburban domesticity from our national broadcaster.

Kotikatu on Yle1 on Thursdays and Fridays at 20:00.

This email address is being protected from spambots. You need JavaScript enabled to view it.