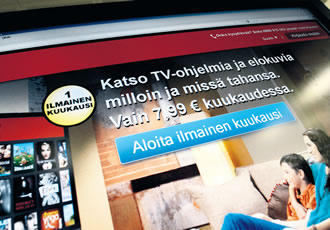 With TV in desperate need of a big kick up the bum, it’s not a surprise that video on demand services have started springing up in many countries including this one. There are so many services, despite the product being in its infancy, that the market is almost beginning to feel saturated already. Nonetheless, there’s some good stuff on offer, and when Viaplay offered your’s truly a few months of free service it seemed like a good opportunity to see what’s up on the televisual frontier.

Like their competitors such as Netflix, Viaplay’s service involves paying a monthly fee and then watching unlimited TV programmes, movies or sporting events. The main selling points here seem to be a) variety and b) sports. Taking the latter first, your monthly fee lets you watch assorted live NHL games, boxing and so on that would only otherwise be available on Canal plus or some other, potentially more expensive content provider. Obviously, if you dig that sort of thing then this might be a service you’d be interested in. So far during my time with Viaplay I haven’t come across any of these live events so am unable to comment on how good the quality is.

The main draws for me are the 1500 or so movies and dozens of TV series that are available. The selection is really rather impressive, it must be said. From movie classics (Dirty Harry) to horror (The Thing), recent releases (The Grey) to family films (The Smurfs) pretty much every genre is covered. There are even 157, er, ‘erotic’ movies on offer, not that I’ve counted or anything. The quality is variable as the service seems to prefer HD or at least modern movies: watching Mean Streets was an exercise in retinal pain as Harvey Keitel is reduced to a figure comprised of ten pixels. But new films appear regularly and fairly quickly after their theatrical releases, depending of course on the deals made with the studios.

Similarly, the TV section offers a notable selection of past and present shows. Friends and Lost make rather obvious appearances, alongside reality show crap such as Jersey Shore and more entertaining and occasionally educational programmes such as Mythbusters. A total of 59 series means you have a lot of hours of telly to plough through.

It seems to me that Viaplay offers pretty decent value for money, but is it enough? If you find regular telly boring (and who doesn’t?), then this is a decent option to add more variety to your viewing, and the movies definitely add value to the whole package. But you should also bear in mind that there are similar services for free such as YLE’s Areena, although they never have such a wide selection of options, and only follow the channel’s own schedules. Other pay services like Netflix and Elisa’s Viihde are more similar to Viaplay, but the latter, at least, doesn’t offer such a good selection in my view. In general it seems that traditional television channels may well have a hard time maintaining their market positions when quality video-on-demand services become more prevalent. Personally, I welcome Viaplay et al with open arms.

Nick Barlow
This email address is being protected from spambots. You need JavaScript enabled to view it..
The writer knows the art of channel surfing.
LEHTIKUVA / KIMMO MÄNTYLÄ