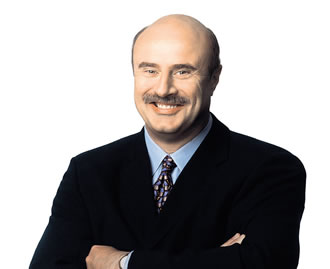 Dr. Phil himself is a rotund, affable family man whose wife attends all his shows. He’s done sterling work setting up a charity, the Dr. Phil Foundation, to help families at risk. His seven bestsellers have been translated into 39 languages and have sold millions. In short, he’s proven you can be a slaphead and incredibly successful.

The topics he covers on the show are pretty varied, but several groupings can be discerned. 1) Family matters: Children going AWOL, violent husbands, perfectionist mums, fireproofing your marriage and so on. 2) Rejected B-movie titles: The Lost Boys and the Children of the Compound or The Locator: Reunion Aftermath. Reality show ideas: Man Camp Newlyweds, Make My Kid a Star, Brat Camp, etc. 3) 1960’s pornographic movies, like Runaways Gone Wild.

There are of course also the FEAR shows, apparently designed to make us as terrified as possible so we’ll buy Dr. Phil’s DVDs and books. If we take into account all the child molesters, pimps, internet groomers and discharged psychopaths on the show, it seems the only course of action is to stockpile food and weapons, lock your doors, and emerge years later, blinking in the sunlight, into an anarchic post-nuclear apocalypse, feebly clutching a copy of Phil’s Love Smart: Find the One You Want in your wizened hand.

The weirdness comes in part from the seeming devotion that possibly millions have towards Phil. The fact that people need to consult the good doctor in order to find out whether or not leaving their philandering, wife-beating bastard husband would be a good idea or not leaves me feeling almost as pessimistic as the fact that they submit themselves to trial by millions on a daytime TV show. If my kid was a smacked-up junkie who stole my rent money, I sure wouldn’t go on telly and tell everyone about it.

His wife, Robin McGraw, by the way, wrote a book called Inside My Heart, where she “shares the philosophies that have proven to align her with God’s will”. There’s another slab of weirdness for ya. Basically, if you like watching miserable people weeping on TV being consoled by a walrus, this show’s for you. It’s also been on Nelonen at regular intervals for the past, umm, forever, and thereby also provides extra evidence that that is one channel that ran out of ideas years ago. Currently on Friday afternoons, the best thing about Dr. Phil is that it’s a good way to make you feel brilliant about yourself in time for the weekend.