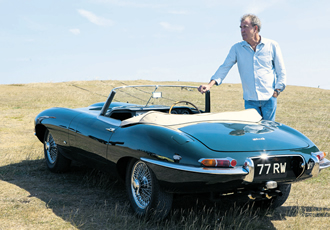 Ostensibly, Top Gear is about cars, and indeed was originally intended for people who give a monkey’s about our four-wheeled friends. These days it still has cars in it but is watched by lots of people who couldn’t care less about them, like my 13-year old niece. What a lot of people don’t know, but I do thanks to Wikipedia, is that the show began way back in the stone ages (i.e. 1977). Cancelled in 2001, and re-launched thanks to Jeremy Clarkson in 2002, it soon achieved stratospheric success as one of the BBC’s biggest cash cows. These days the 17th (!) season is being shown on MTV3 in some weird-ass scheduling nightmare of the sort that channel specialises in.

Clarkson, of course, is the main reason for the public’s love/hate relationship with the programme. He is the average bloke’s talisman for standing up for the common people against the tentacles of authoritarianism (he hates speed cameras and speed limits), taking the mick out of environmentalists, making humorous Nazi salutes and being vaguely racist and homophobic. The fact that he is only presenting a show about cars shows how out of all proportion our faith in celebrity wisdom has grown. While he has received criticism in the UK, I suspect that for Finns his casual bigotry is barely noticed, since that’s the kind of prejudice many Finns themselves specialise in. Water off a duck’s back, you see. In his defence, Clarkson has described himself as a ‘balding and irrelevant middle-aged man’, and he thinks Piers Morgan is a prat, so he can’t be all bad, I guess.

Two other presenters exist as foils for Jeremy’s leaden, predictable wit. Richard Hammond crashed driving a jet engine powered dragster for Top Gear and almost died. While any early death is a tragedy, I fear that had he passed away I would have found the inevitable outpouring of grief difficult to understand. You drive in a jet engine powered dragster called The Vampire, capable of attaining speeds of 505 km/h, you have to factor in the possibility of dying in a high-speed crash and being smeared all over the tarmac, that’s all I’m saying.

The other presenter is James May, who appears in a starring role as a vaguely dim nonentity. Obviously, the BBC love Top Gear since it pays for itself several times over. Include the DVDs and broadcast rights to more than 100 countries, and the show may as well be called Print Money. I suspect, though, that it could actually be about anything at all. If it were called Top Toasters, with Clarkson and co. analysing toasted sandwich makers before taking their least favourite one and blowing it up with a helicopter gunship, people would still watch it.

Nick Barlow
This email address is being protected from spambots. You need JavaScript enabled to view it..
The writer knows the art of channel surfing.
Photo: ROD FOUNTAIN