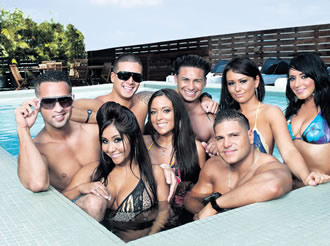 Benidorm Bastards, or Tekarijengi tempaisee in Finnish, is an extremely amusing programme that comes from Belgium. Not wanting to offend any Belgian readers we might have, but in my ignorance I never considered your greatest export to be your sense of humour. I am now happy to reconsider that ill-informed opinion, at least to some extent. Taking its cue from the British (and, in my opinion, inferior) Trigger Happy TV, Bastards is a hidden camera show where old people do strange things in front of bemused members of the public accompanied by a surreal easy-listening soundtrack. It’s great, but it’s also finished on TV Viisi for now. However, YouTube is your friend, right? It’s well worth a watch, and for once so is the inevitable American copy.

Despite missing most of that series TV Viisi has become one of my favourite channels. Not that the quality of their shows is particularly consistent, but they have Blackadder as well as the hilarious Jersey Shore. The former show is one of the best comedies ever. The latter, cleverly shown in the early hours of the morning when this shows target audience (drunkards and students) are the only ones still awake, is in equal measures comical and apocalyptic. Perma-tanned idiots from New Jersey stay in a house together, go out to party, get drunk and have sex with each other in front of your disbelieving eyes. If you see it sober you’ll probably end up thinking the human race is doomed. If you watch it half-cut it’s not so bad.

Away from Viisi other channels are also winding down their summer schedules. Thus we see Undercover Boss UK go out with a whimper and the unenviable reputation of probably the worst example of transatlantic idea-exchange since Celebrity Wife Swap. The format is the same as the original – boss of big company goes into workplace to discover what it’s like on the ‘frontline’ – but since it’s from the UK they’ve basically done away with the bombastic gravitas. I’m sorry, but having some bloke from Hull inform you of the perils of international business just doesn’t have the same gravitas as when it’s done by the same chap who does voiceovers for Batman.

All this winding down, of course, is to get us in the mood for the Autumnal schedules, which, I can reveal, will consist of the same shows we’ve sat through since forever. On MTV3, for example, we have new or continuing series of The Bold and the Beautiful, Biggest Loser, Salatut Elämät, and so on. Anyone else feel like Bill Murray in Groundhog Day?

Nick Barlow
This email address is being protected from spambots. You need JavaScript enabled to view it..
The writer knows the art of channel surfing.
LEHTIKUVA / AFP PHOTO / MORRY GASH