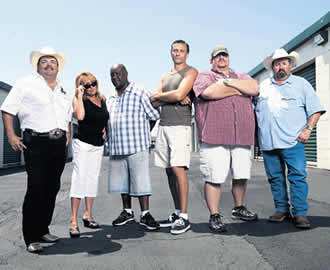 Fox actually began broadcasting in April. To say they have brought nothing new to the table would be like saying Russell Brand is a little bit egotistical: an understatement of magnificent and vast proportions. The first show I watched on Fox was Storage Wars, a stupid-sounding programme with the rather unwieldy-sounding Finnish title of Huutokaupan metsästajät. It’s a reality show about people in California who buy at auction abandoned storage lockers and all the contents therein, without seeing what’s inside first. None of the buyers are interesting, although like everyone on a reality show they all think they are.

It’s a strange show. We never find out what happened to the people who hired the lockers in the first place, or why they’d been abandoned for the three months necessary to auction them. As a result, the poking around in someone’s possessions feels rather like legalised robbery. Sometimes they find interesting stuff like an antique set of golf clubs or an 80-year old ice-cream maker, but to get there they have to sift through old photos, scrapbooks, children’s toys and similar detritus the like of which we all leave behind. The aim is to find items of value to flog off later, proving that Mammon’s appetite cannot be satiated, even with the selling of remnants of unknown histories.

Maybe I’m making too much of it, but in a world filled with useless reality shows Storage Wars does nothing to brighten the gloom, instead merely reinforcing the notion that TV execs are engaged in a persistent attempt to obliterate all faith in humankind. Unfortunately, the same can be said for all of Fox TV’s output, which is distinguished by…er…nothing at all! Oh look, it’s Conan. Again. Ally McBeal. Surprise! Bad National Geographic Documentaries, shows about expensive cars, Family Guy reruns, Criminal Minds, they’re all here. I haven’t seen such a collection of rubbish since I visited Naples in the summer of 2008. It’s incredible how they managed to find so many naff programmes and thought to make a channel out of it.

Since this is Fox we’re talking about – purveyors of nonsense since 1986 – one shouldn’t perhaps expect too much, despite the hilarious motto of Fox International Channels: We Entertain People. Yeah right. Their one good show, The Walking Dead, is on Sundays at 21.50, and I can confidently say that for the rest of the week there is nothing whatsoever worth watching, unless you’re the village simpleton. Nothing to see here, folks, move along.