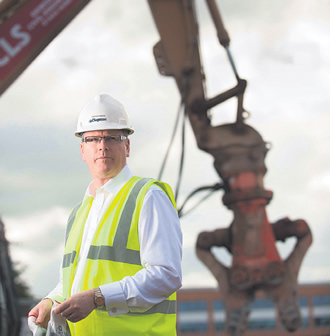 Each week a high-powered executive is sent to the front lines of his (and the bosses are overwhelmingly male) company, typically a drive-through, assembly line, office block, manufacturing plant or janitor’s workroom, to find out what daily life is like for the minions who make him all his cash. They only go undercover for a week or two, donning a disguise and undergoing a temporary name change, but luckily the show’s producers always manage to find a good selection of cheery, hard-working employees to be their mentors.

Thus last weekend we had Stephen Martin, CEO of the Clugston Group, trading in his suit for a hard hat when pouring concrete and working night-shifts repairing roads. Mr Martin seems like a nice enough bloke, and this being the UK version it’s a bit more down-to-earth than the Yank edition as he interacts with his humble workers. This mixing with the normals is supposedly good for the boss, as it means by the end of the show he starts to understand the human impact of his draconian policies and blah-blah-blah. It’s a bit like The Apprentice in reverse, and since these days everyone hates Donald Trump that’s only a good thing.

Undercover Boss still has all the subtlety of a sledgehammer. The Brits seem to have kept exactly the same unnecessarily exciting-sounding music and tender-yet-suspenseful voiceovers just minus the ridiculous bling. Martin meets up with some old and wise construction workers who divulge some sage advice to him. At the end of show he reveals his true identity and rewards his unsuspecting underlings. One joiner, Liam, it turns out, is waiting for his girlfriend to give birth. This provides a nice little segue to Stephen visiting the new family, bringing flowers and chocolates and giving Liam a new job. Aaah, sweet innit? It’s hard not to feel emotionally stirred, even in contrived situations like these.

It feels a bit unfair, however. Only three or four workers are met by the boss, so they’re the ones who get some kind of goodie at the end. What about their co-workers? Sure, they might get a new coffee room, but only one of them walks away with a new job and a 10,000 pound stipend for their child’s education. Also, since the workers are the only ones who are in this whole thing involuntarily, it feels like the Man is getting one over on the proles, and the viewer, once again.