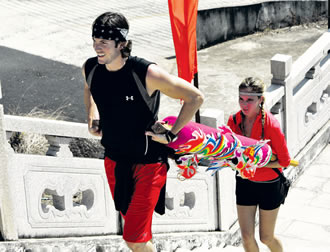 Well, buddies, I’ve got some news for you. Perhaps you haven’t been studying the weather reports from your little television producer bunkers, but so far there’s barely been a day this ‘summer’ when it hasn’t been as wet as a fish’s wet bits, and what do you think people do when it’s sodden and they’re in their summer cottages? Watch telly, that’s what. Either that, or play ten-year old editions of Trivial Pursuit, drink moonshine and stab each other. One of the many problems with watching television for extended periods, other than a decline in short-term memory and social functions, is that it’s simply not made, these days, to be watched for long. I’m not talking so much about the lengths of the programmes themselves, but rather the variety on offer. It’s so easy, cheap and appealing to show repeats of sitcoms and soap operas, for example, and we get so many of them, that it also gets very difficult to find anything that might stimulate your thought processes as opposed to induce loss of rational consciousness. It’s come to a pretty pass when the adverts incite more emotions in the viewer than the programmes themselves do – intense loathing and paranoid depression, mostly.

Now, don’t get me wrong, I’m all in favour of selective vegging in front of the old mind-control box, but MTV3’s summer schedule, for example, is filled with The Biggest Loser, The Amazing Race, Salatut Elämät and Emmerdale. I mean, could it be any more boring? No. Personally, I’ve taken to reviewing my DVD collection and rediscovering some old gems. The World at War might consist of 26 episodes and run for 22 and a half hours, but it’s also the best television documentary ever made, even if Finland barely gets a mention. Frankly, YLE Teema should dedicate one day to showing the whole series. Once you’ve seen it you’ll realise that those shock-docs that Nelonen and Jim love showing simply don’t cut the mustard. Mind you, once I’ve gone through that and the complete David Attenborough nature collection, I don’t know what I’ll do. Trivial Pursuit, anyone?