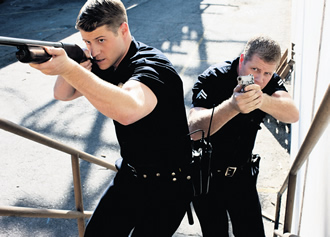 Regular readers of this column might have realised I have something of a soft spot for police dramas. From Hill Street Blues to The Wire, there’s nothing like a realistic, gritty cops-on-the-beat series to get the juices pumping. So when I heard that Southland was starting I got interested. This series started a bit of a stir as a, er, realistic, gritty cops-on-the-beat which supposedly presented an uncompromising view of Los Angeles police officers getting faced with all kinds of crazy stuff. It stars Ben McKenzie (that bloke from The OC) as well as some other people you might or might not have, but this being an ensemble cast number individual stars aren’t really so important. Having said that, the fourth season stars Lucy Liu, which is presumably something to look forward to.

Supposedly the characterisation is true-to-life which means that the LAPD contains 99 per cent annoying sociopaths and 1 per cent rationale, considerate human beings. Season 3 has just started on MTV3, the first episode of which involved Detective Lydia Adams dealing with yet another new partner – the poor woman seems to get all the nutters, in this case a vaguely psychotic woman with a penchant for dangerous high-speed pursuits – as well as a shoot-out in the middle of the street and a murdered rape victim. Let’s just say it’s not a comedy. Unlike, say, Blue Bloods, there doesn’t seem to be many underlying or consistent plot lines, or at least not involving any of the crimes. Rather, each episode contains several felonies which are invariably solved before moving on to the next ones the following week. Positively, this makes it easy to get into the show as you basically don’t have to have seen any of the previous episodes to understand what’s going on.

Perhaps the most annoying thing about the show, apart from the generally depressing tone, is the mental camera work, seemingly conducted by a chimpanzee on an LSD flashback. It jerks, swoops and wobbles all over the place. It’s so unsteady it makes me feel a bit drunk when I’m watching it. I don’t know why directors insist on this style of shooting. I suppose it’s to give it a true-to-life, documentary-like style, but I find it nauseating and irritating more than anything else. Let the actors and dialogue do the work rather than distracting us by quivering footage shot by ex-alcoholic cameramen suffering from delirium tremens.

But that aside, Southland is pretty good. Never having been to Los Angeles I can’t say how realistic it actually is, but I’m prepared to believe that LA really is as mental as it appears on this programme, filled with gang-bangers, maniacs, rapists, killers and general scum of the earth, some of whom work for the police. I don’t think I’d like to go there, but I’m quite happy watching it on telly.