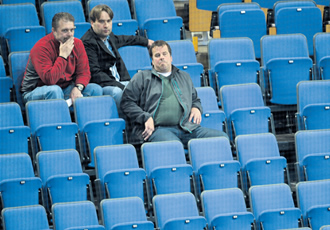 Sport is an activity best appreciated by sitting on a sofa, drinking beer and watching it on the telly. This is especially true for all sports that I’m rubbish at, which is most of them with the exception of cricket, and since the chances of getting any cricket on TV in Finland are zero, then you have to either play it or forget about it. Therefore, like millions of Finns, I was excited to realise that this year’s ice hockey world championships would be held jointly in Finland and Sweden. Here, at last, was a chance to cheer on the Lions not only in the comfort of my own home but while they were playing in Finland. This was sure to be almost like being there. Home advantage is everything.

Unfortunately, it didn’t quite work out like that, for, as you might know, the Finnish Ice Hockey Federation (FIHF) has made a major balls-up of the whole thing. The problem is essentially two-fold. Firstly, much like Premiership football in England, the old sofa-and-beer routine isn’t going to work unless you’re forking out for Canal+, since that’s where all the action is these days. It used to be that YLE had most if not all of the games shown live, but they were outbid this time (although the inferior MTV3 bagged Finland’s games). Obviously you could go to a bar to watch it, or check out some dodgy 10-pixel internet feed, but it’s not the same, dammit.

The second problem is that even if you do shell out the extra cash, what you’ll have seen up until now is matches being played in front of the kind of audiences normally reserved for Droylsden vs. Solihull in the English Blue Square Conference North division, i.e. four men a dog. Ticket prices have been crazy. For the more rubbish games like France vs. Switzerland they have been minimum 40 euros – enough that you’d notice it, but low enough to tempt people. Until popular rage made them reduce prices, a single ticket to one of Finland’s group games cost at least 150 euros – low enough that a multi-national corporation could slam it on expenses, but high enough that the cost of a day out for a family of four would mean they couldn’t eat for two months. Sport for the people, right?

I don’t know if I’ve ever heard of a major sports event that has managed to generate as much bad feeling as this one. The only reasons the Finns are slightly more up for it than the Swedes are 1) no-one in Sweden really cares that much for hockey, and 2) we are reigning champions so ner-ner-ner. But still, these kinds of occasions are supposed to be all about the atmosphere, even in your living room. So far, though, you’ve had vast swathes of empty seats, Finland fans at the Belarus games because they’re all that they can afford, skint-looking tourists grumbling in their seats and the image of the FIHF crumbling while their president does a Nero and fiddles with his massive wodge of cash. They should make a soap opera out of it - it’d be better TV.