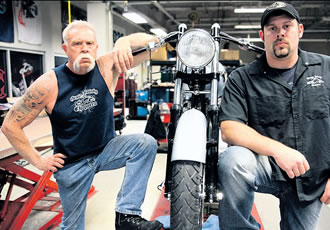 Traditionally, Finnish telly has been so backward that the programmes seem to have been copied straight from Soviet-era broadcasting in terms of fashion, content and production values. While this still holds true most of the time, with some imports we are comparatively stunningly up-to-date. We used to have to wait months if not years to view the ‘latest’ Desperate Housewives; now it’s just a matter of weeks. Some recent series like Grey’s Anatomy have appeared here the same week as they aired in the US. If that’s not progress, I don’t know what is. But, presumably for cost reasons, TV companies can’t afford to always buy new stuff, so in the case of major channels also having some sister ones, the poor cousins, as it were, are often simply given big brother’s hand-me-downs.

Case in point is the fifth season of American Chopper now appearing on Jim (Sundays at 11 am and 10 pm). This show used to be on Nelonen, Jim’s sugar daddy, and is a great example of a show which should have died a quick and painless death at the end of season one yet has been wheezing and puffing along in a thoroughly geriatric way for far longer than preferable. While you might be mistaken for thinking it’s a show about a mass murderer or a famous adult-movie star, it is in fact a show all about bikes. Specifically, it’s about massive gas-guzzling two-wheeled noise merchants generally ridden by large bearded gentlemen, and the building of them (the bikes, not the beardos).

Back in 2003 when the show first aired it was an occasionally amusing and vaguely instructive look into the world of customised motorbikes. The show has always contained two main figures – the owner of the workshop, Paul Sr., and one of his sons, Paul Jr. If it had remained a show about blokes who like bikes it might have stayed slightly interesting. As it is, over the years it has developed into a ridiculous soap opera/car wreck of a show, culminating, in a later season, with [SPOILER ALERT!] the firing of Paul Jr. for being a good-for-nothing layabout. At some point in the proceedings Paul Sr.’s other son, Michael, was also introduced into the mix, who doesn’t do anything except stand around saying ‘dude that’s awesome’ and getting into big swear-fests with his dad.

Oh yes, the arguments. Never on TV or indeed in my life have I seen a ruckus to match the insane rows that these guys have. Almost every episode has Paul Jr. or Michael not doing what he’s supposed to do, his dad getting pissed off, they have a massive shouting match, someone punches a hole through the door, chairs get thrown across the garage, and the man on the bleepy-swearword-button starts to earn his pay. The language is so bad they may as well just broadcast a continuous bleep, or cut out the soundtrack altogether and replace it with a nice bit of Mozart. Otherwise, this show is just an exercise in showcasing large, aggressive American idiots. God knows seven seasons is more than enough, but couldn’t Jim get some balls and give up on this already? There’s still time to get on yer bike.