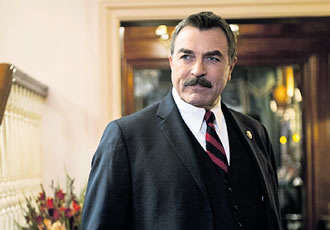 I reckon that one of the best ways to become an iconic TV or movie star is to grow an impressive moustache. Facial hair can transform an ordinary Joe into a force to be reckoned with. Of course, over the years many famous figures have sported facial fluff. Hercule Poirot once said, “my moustache is so powerful, it can see things with this spyglass that you can only dream about.” A moustache worn by Charlie Chaplin once fetched £17,925 at auction. The problem with celebrity moustaches is that if you sport one, everyone thinks you want to be like that person. This is great if you look like ice-cold killer Charles Bronson in Death Wish. It’s not so good if you look like John Travolta in Battlefield Earth.

It is good, however, if you look like Tom Selleck, who already had an imposing upper lip in the eighties as Magnum P.I. (the best TV cop show ever, by the way). In the last 20 years his growth has increased in size to have the appearance of a massive hairy slug hibernating underneath his nostrils, and now he’s the New York Police Commissioner in Blue Bloods, showing on Nelonen at their customary time for half-decent shows i.e. sometime between half past midnight and one in the morning on Sunday night. Selleck plays Frank Reagan, a man possessed of enough stereotypes in one show to keep the average actor going for their entire career. He’s an Irish-American Vietnam vet, ex-US Marine, and widowed father of four kids, one of whom died in the line of duty as NYPD beat cop.

Naturally all three of his remaining kids followed him into law enforcement of one kind or another. Donnie Wahlberg plays Danny, a detective who doesn’t do things by the book but gets results. Danny’s younger brother Jamie is a fresh-faced new recruit straight out of cop college, and their sister is Erin, an assistant district attorney. Not only that but Frank’s dad is the ex-police commissioner. In short it’s the kind of family that anyone with any sense of decency would steer well clear of I reckon.

As I mentioned, the show is alright, if not exactly the best thing since, well, Magnum P.I. After a while each episode plays out in pretty much the same way: Some horrible crime is committed. Either Danny gets involved and beats up some punks to get crucial evidence or Jamie learns a valuable lesson in policing. Regardless, their sister has to bail them out while gramps sits in his rocking chair doling out sage, patronising advice. Meanwhile Franky boy himself is engaged in walking a delicate tightrope between supporting his family and making sure justice is done. There’s also an underlying plot involving the dead brother being involved in some secret society of police something opr other. I haven’t quite got to grips with that one yet, and whether or not I ever will do depends on two things: 1) can I stay awake long enough on Sunday nights, and 2) how irresistible is Tom Selleck’s moustache?