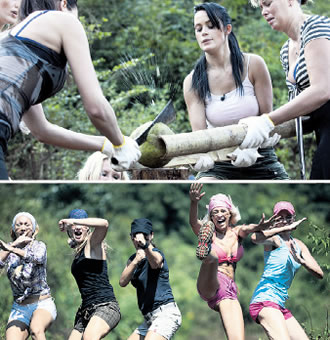 It takes a lot, these days, to drive me to a state of despair, but Sub TV has done it. A few years ago even watching an episode of Big Brother would be enough to drive me into a depressed funk for days on end. I assumed that BB was pretty much the worst we’d get, and things couldn’t get any worse. Turns out, I was wrong.

Thanks to Sub TV we are now able to watch a show that manages to be pathetically sexist, incredibly unintelligent, badly made, and usher in the beginning of the end for, oh, only the entire human race. Viidakon tähtöset (Stars in the Jungle) is yet another show that’s been nicked from elsewhere, crammed full of Finnish nonentities and thrown uncaringly onto our screens, presumably to suffer through one season before I sincerely hope it is mercifully euthanised. If you’re British you might know I’m a Celebrity Get Me Out of Here, on which this version is based. I should warn you now, this country’s version is even worse than the British one. I know!

The basic premise is that a bunch of people you’ve never heard of are left in a jungle for a few weeks to survive by occasionally being put through their paces in ordeals involving eating disgusting things with more legs than I’ve had hot dinners. Like in other countries the celebrities – and I use that word in the loosest possible sense – are nonentities. Here we have, amongst others, Miss Finland 2011, Matti Nykänen’s fiancée and some girl who was on Big Brother twice. Imagine that – the reason you’re on a crappy reality show is because you’ve already been on another, equally crappy one twice before! Brilliant. The mind boggles.

Anyway, this line up of ten is notable mainly for the fact that they’re all women, and most of them are really fruity, especially when they’re wearing bikinis. Why are they all women? I don’t know, but I’m assuming it’s a chance for Sub TV, purveyors of all things lowbrow, to flash some flesh on prime-time TV, titillating middle-aged dads and imbuing our young women with false notions of femininity, and so on, etc. Now I’m all for a bit of fruitiness, but it doesn’t necessarily make good TV. Happily, judging by the lead-in to the show, in most episodes we’re going to be see some mud wrestling, quivering bosoms, half-naked beauties covered in insects (not sure about that one), and some accidental nipple flashes! It’s almost like Janet Jackson’s infamous Superbowl experience all over again, if it were being produced by the Teletubbies.

I managed to sit through the first episode and I can say without the tiniest shadow of doubt that this is the worst Finnish-made show to hit our screens for at least the past year; those of you who watch a lot of TV will know that that is not something to say lightly. Finding any positive points is impossible. Even if you’re absolutely desperate for a glimpse of female flesh, well, that’s what we’ve got the internet for, so I can’t see why you’d bother tuning in to this train wreck. The only people who should be sent to the jungle are the amateurs who made it.